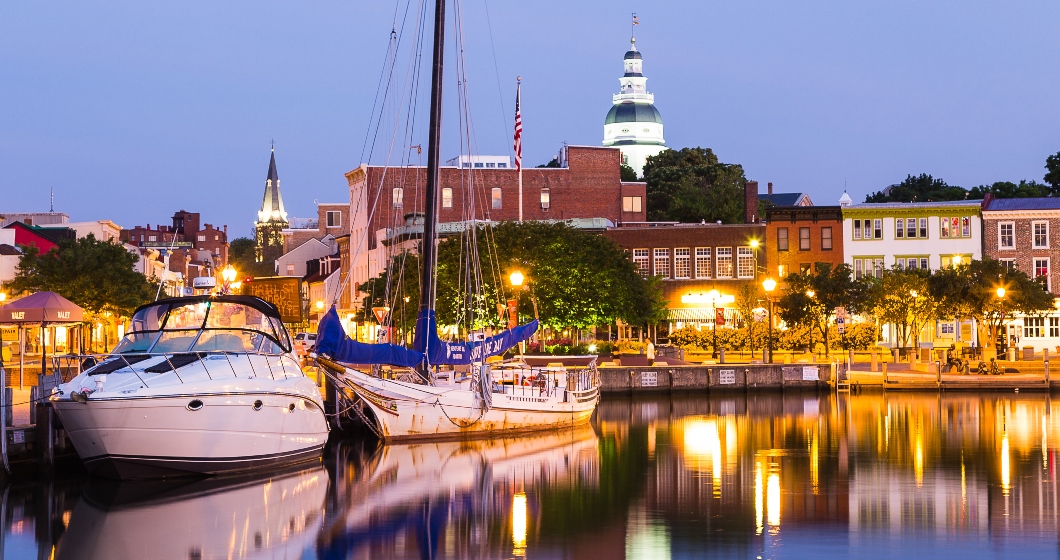 Like many foreigners, I had heard very little about Annapolis before actually visiting. But, despite my lack of familiarity with Maryland‘s capital city, it didn’t take very long for me to feel at home.

I quickly learned that Annapolis’s history is deeper than the Chesapeake Bay waters that surround it. Locals often refer to the city as a “museum without walls.” And they’re not lying. Nearly every inch of it is worth observing and appreciating. 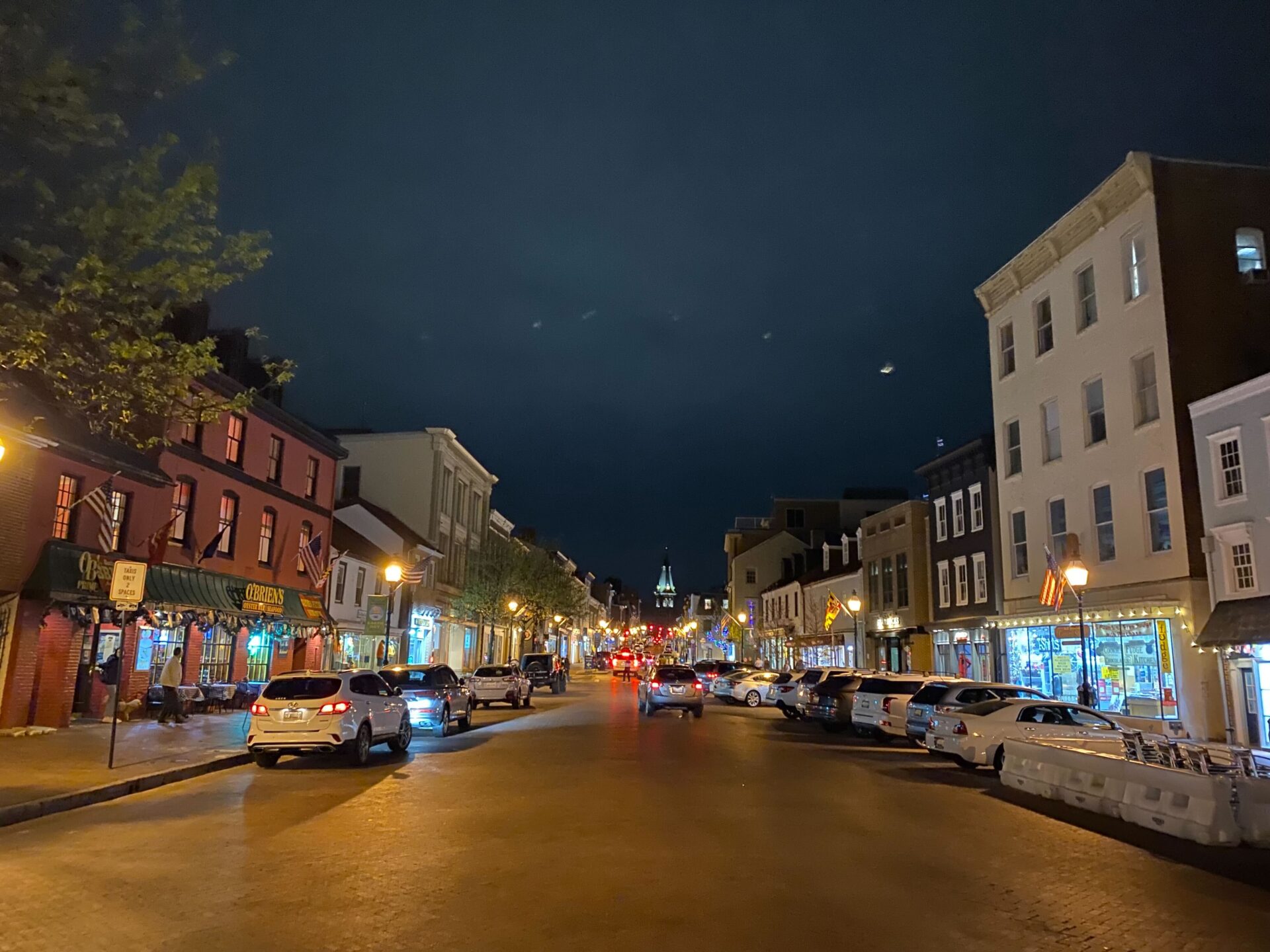 For an 18th-century colonial town, the bustling city with a small-town feel, conveniently tucked between Washington, DC and Baltimore, is surprisingly, well, cool. So cool, in fact, that you can’t throw a crab leg without hitting an art gallery, live music venue, or beautiful piece of architecture. And speaking of the crustacean, it happens to be the state’s specialty, primarily served in decadent crab cake form.

It’s easy to see how proud Annapolitans are of their town. From landmarks to murals to alleyways with their own proper street signs, just about everything is maintained with care, and it shows. As a result, it’s one of the most pleasantly “walkable” cities I’ve been to on this side of the Atlantic.

In a nutshell, this is a place where the people are friendly, the roots are rich, and the food is delicious — but not pretentious.

While Dulles International Airport in DC is fairly close to Annapolis, you’re almost sure to catch traffic. With that said, you’re much better off arriving and departing from BWI Marshall Airport. Conveniently located outside Baltimore’s city limits, it’s only a 32-minute drive away from Annapolis.

Direct and connecting flights are available with Air Canada and a number of American airlines.

The town is littered with great little inns and rentable homes. But if you’re looking for clean, luxurious, and reasonably priced lodging, Annapolis’s Graduate Hotel is your best bet.

Situated right in the centre of town, the large hotel is just minutes away from the Naval Academy, which its nautical and scholarly themed décor is inspired by. Tastefully decorated rooms and a vibrant hotel restaurant and bar are some of its many pros. The staff is also incredibly friendly and beyond accommodating. 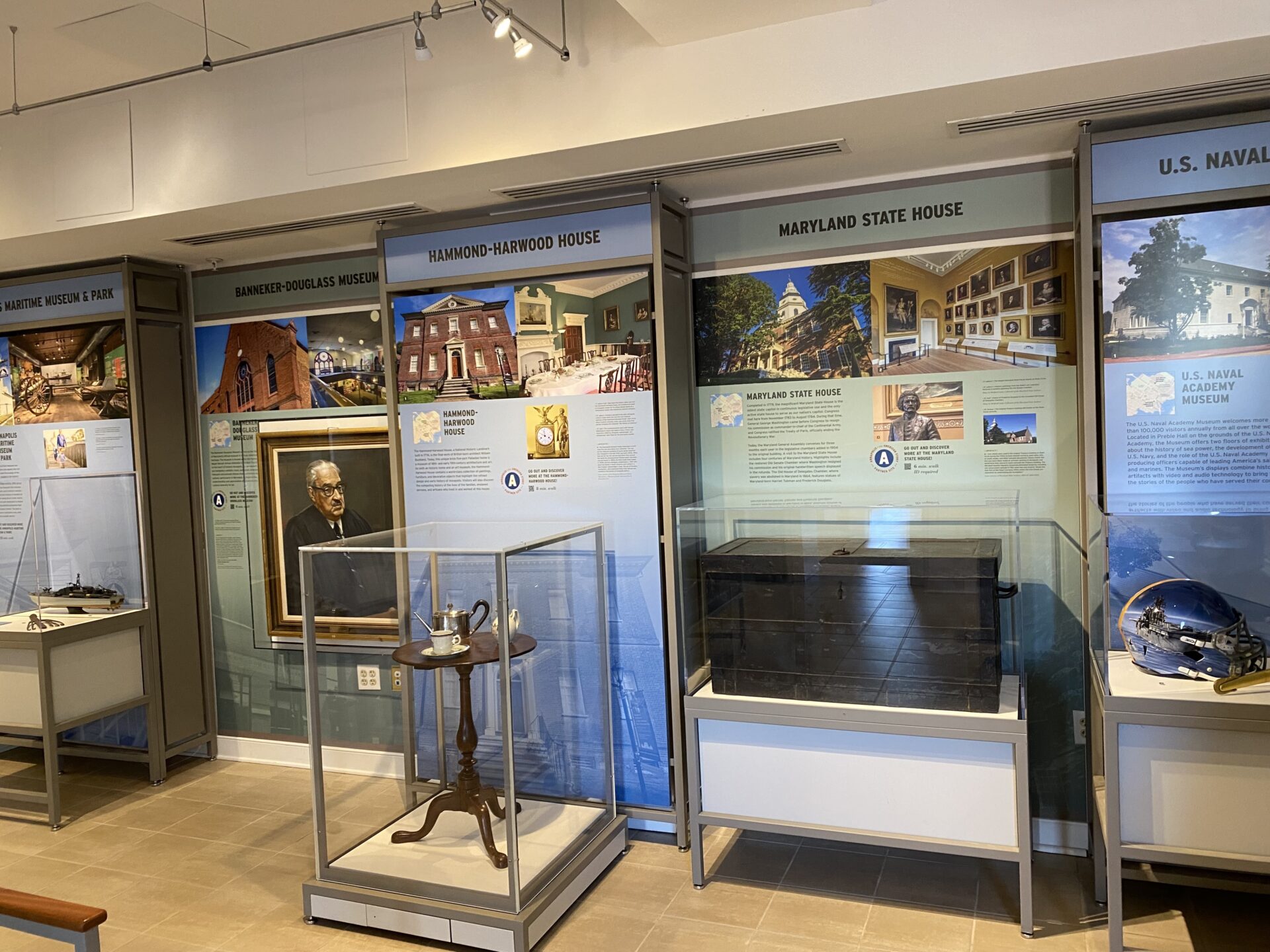 While Annapolis is beautiful on its own, walking its historic streets is even better when you know what to look for.

That’s why, if you want to get a proper feel for the area, there is no better place to start than the Museum of Historic Annapolis. Located right in front of City Dock, this former bakery, rebuilt in 1791, takes visitors on a journey from the Algonquins that first occupied the land all the way up to the future of Annapolis in 2026. 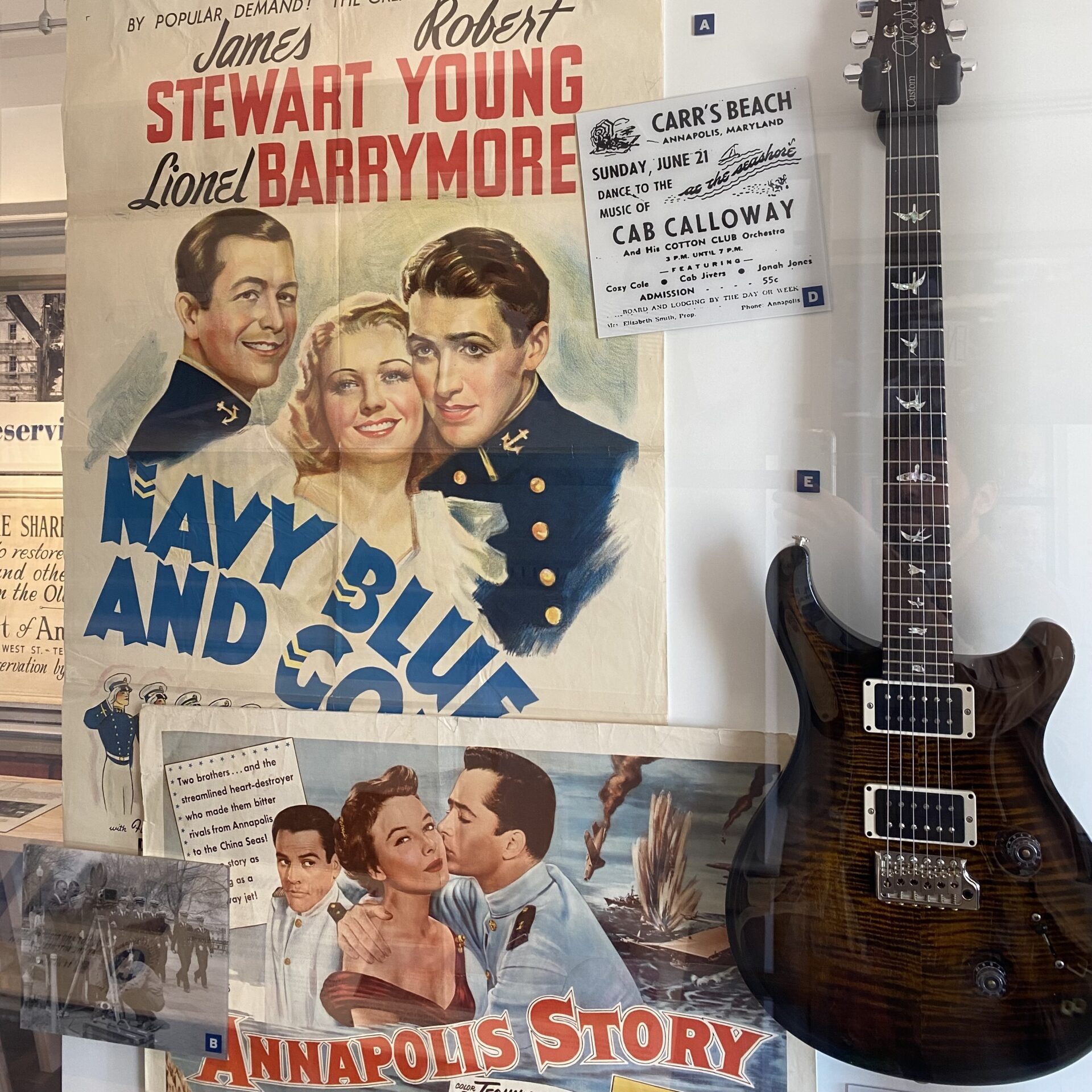 The organization, situated in one of the country’s first historic districts, has saved over 300 archival buildings across town since the early 1950s. As a result, it’s no surprise that “preserve, protect, connect” is HA’s motto.

“This a fabulous entry point to the city,” says visitor services manager Janet Hall. And I couldn’t agree more. 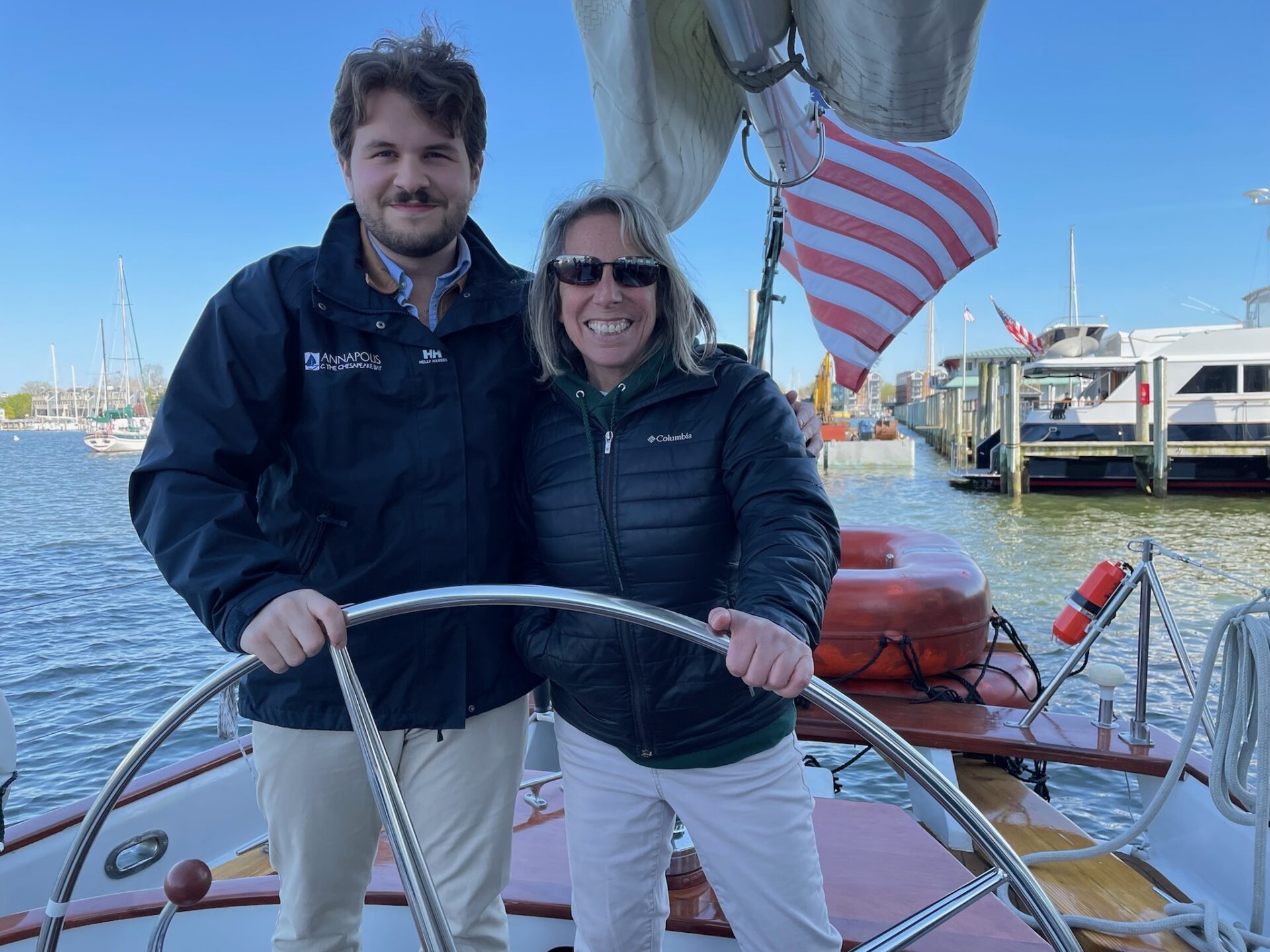 With Captain Jen Kaye aboard the Schooner Woodwind II

When you ask people what you should do in Annapolis, most of them will insist you get out on the water.

And the Schooner Woodwind II, a 74-foot sailboat is one of the best ways to experience “America’s sailing capital.” While the ride is smooth and relaxing, Captain Jen Kaye and her crew also give passengers a sailing tutorial. They even let you get in on the action.

The Woodwind often participates in (and wins) the Great Chesapeake Bay Schooner Race. It was also, funnily enough, used in the 2005 film Wedding Crashers. Captain Jen, who was on set when her boat was being used for the film, has plenty of stories and a scrapbook of photographs from the experience.

Since getting behind the wheel of that boat, I’ll always have an interesting anecdote to share any time the comedy classic is mentioned. 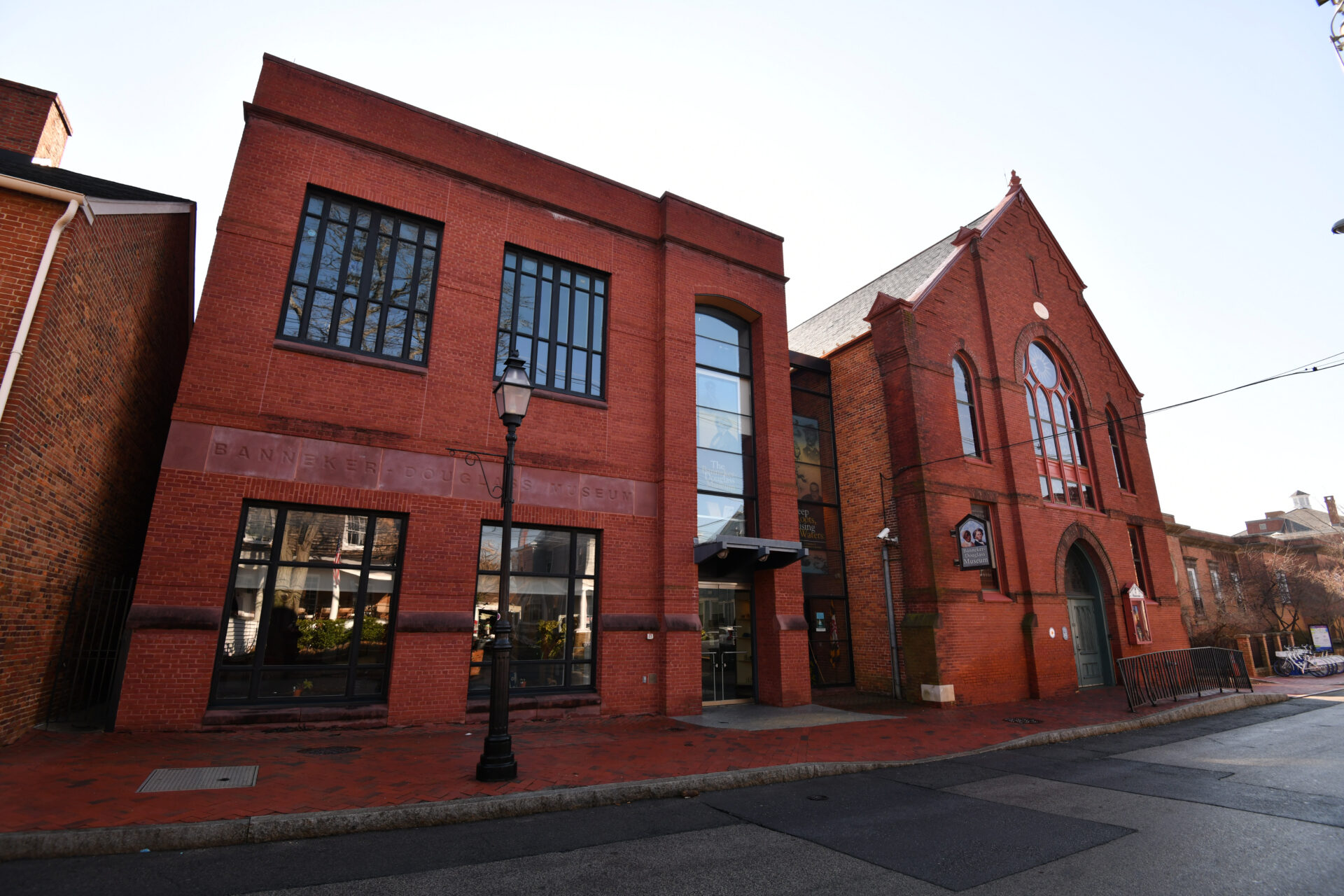 Named after African American heroes Dr. Benjamin Banneker and Frederick Douglass, this museum is housed within the former Mount Moriah African Methodist Episcopal Church, where the likes of Rosa Parks and Thurgood Marshall spoke at.

I received a private tour by manager LeRonn Herbert and Jan Lee, Director of Marketing and Communications. The two of them walked me through hundreds of years of the Black history of Maryland, a split state that fought on both sides of the Civil War. 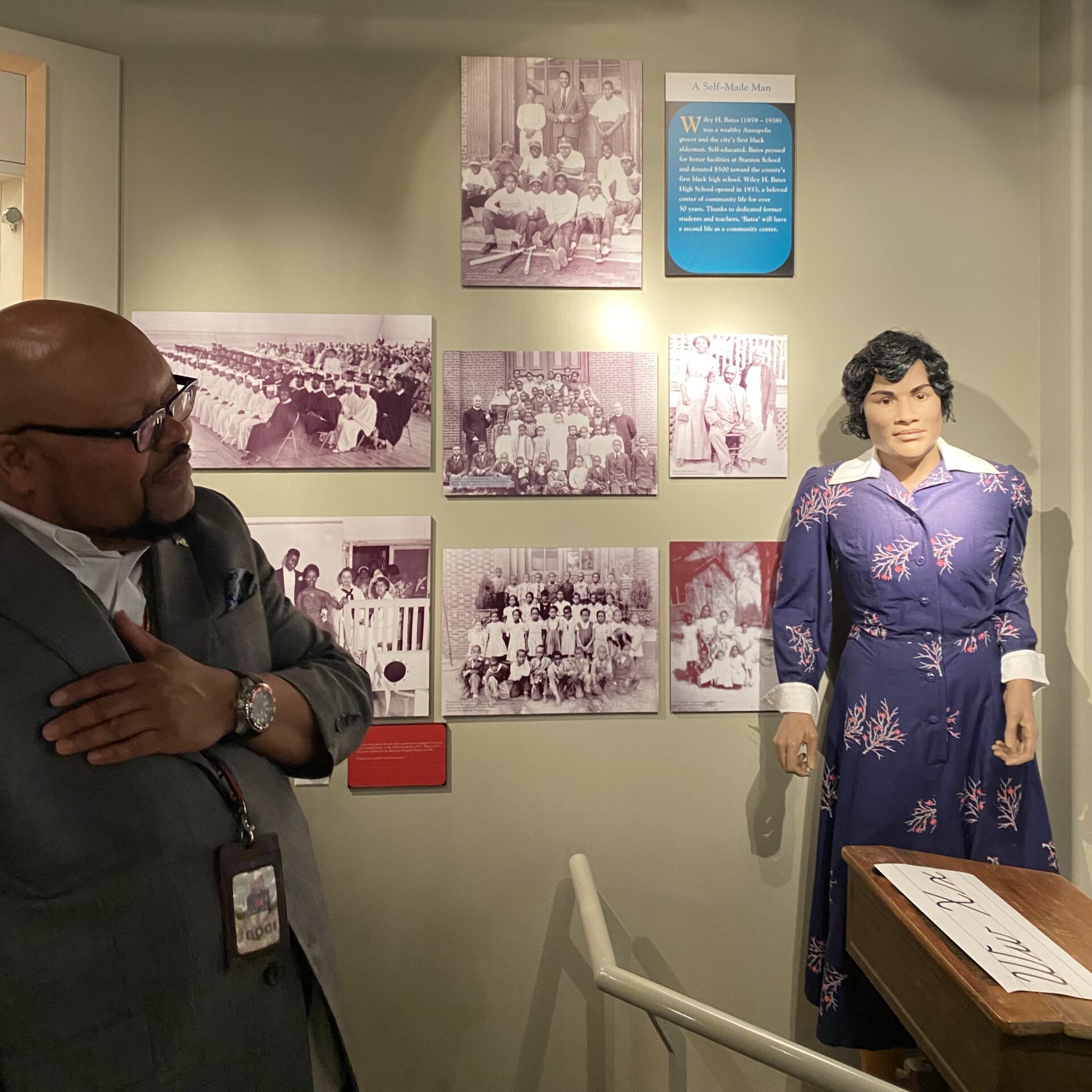 From my tour with LeRonn Herbert

Temporary art installations are often making their way into the church’s upper level. Meanwhile, their impressive permanent exhibition across the hall features life-sized replicas of important underground railroad artifacts and a fascinating timeline you can walk through in chronological order. 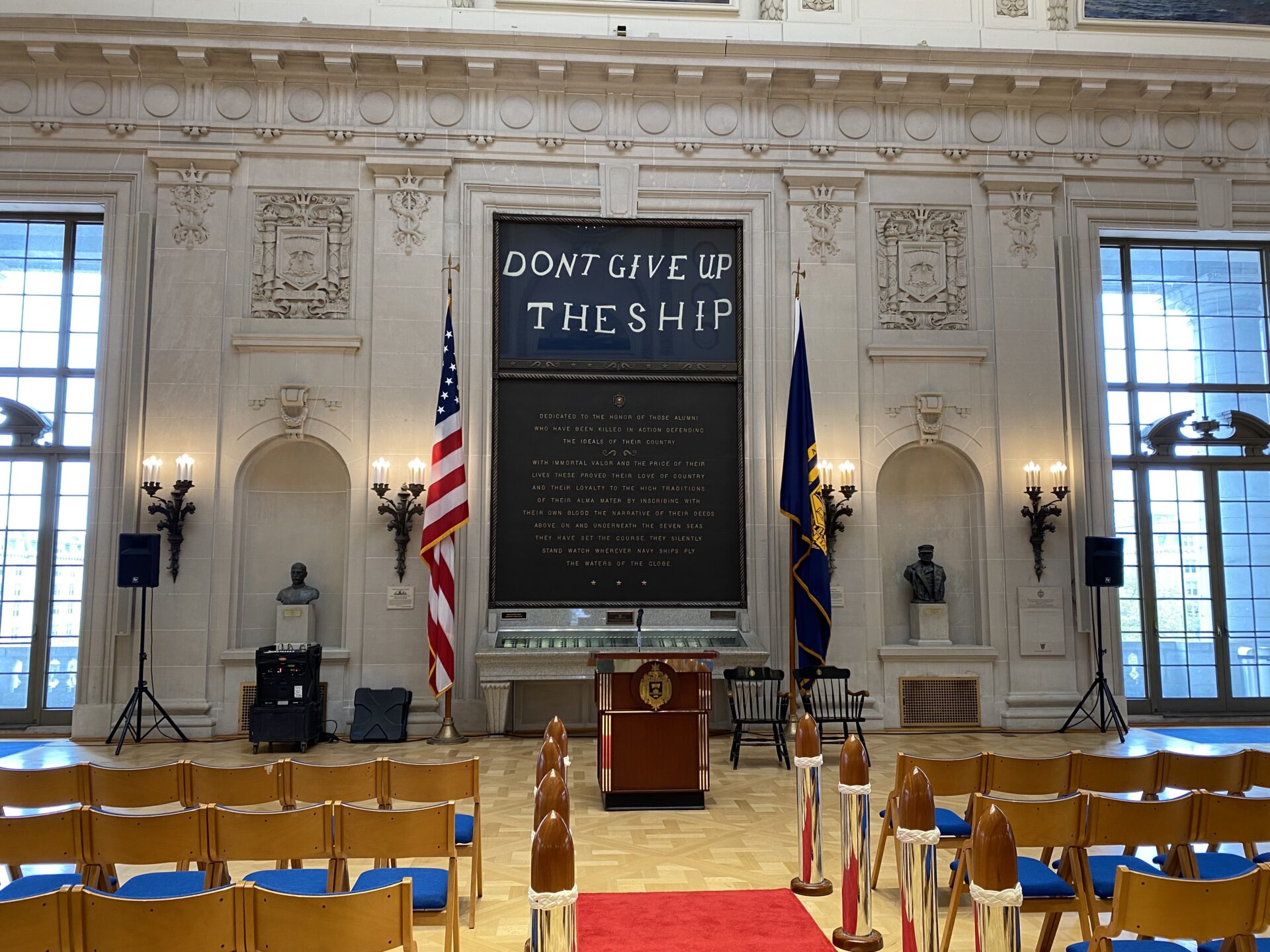 The US Naval Academy is not only an institution that develops thousands of midshipmen every year, turning them into leaders. It’s also a remarkable piece of American history that runs through the heart and soul of Annapolis.

The academy and museum take up over 330 acres of land. I was fortunate enough to see a sizeable chunk of the grounds and go on a tour (which I highly recommend) with Commander Bob Cepek, who graduated from the academy in the 1960s. 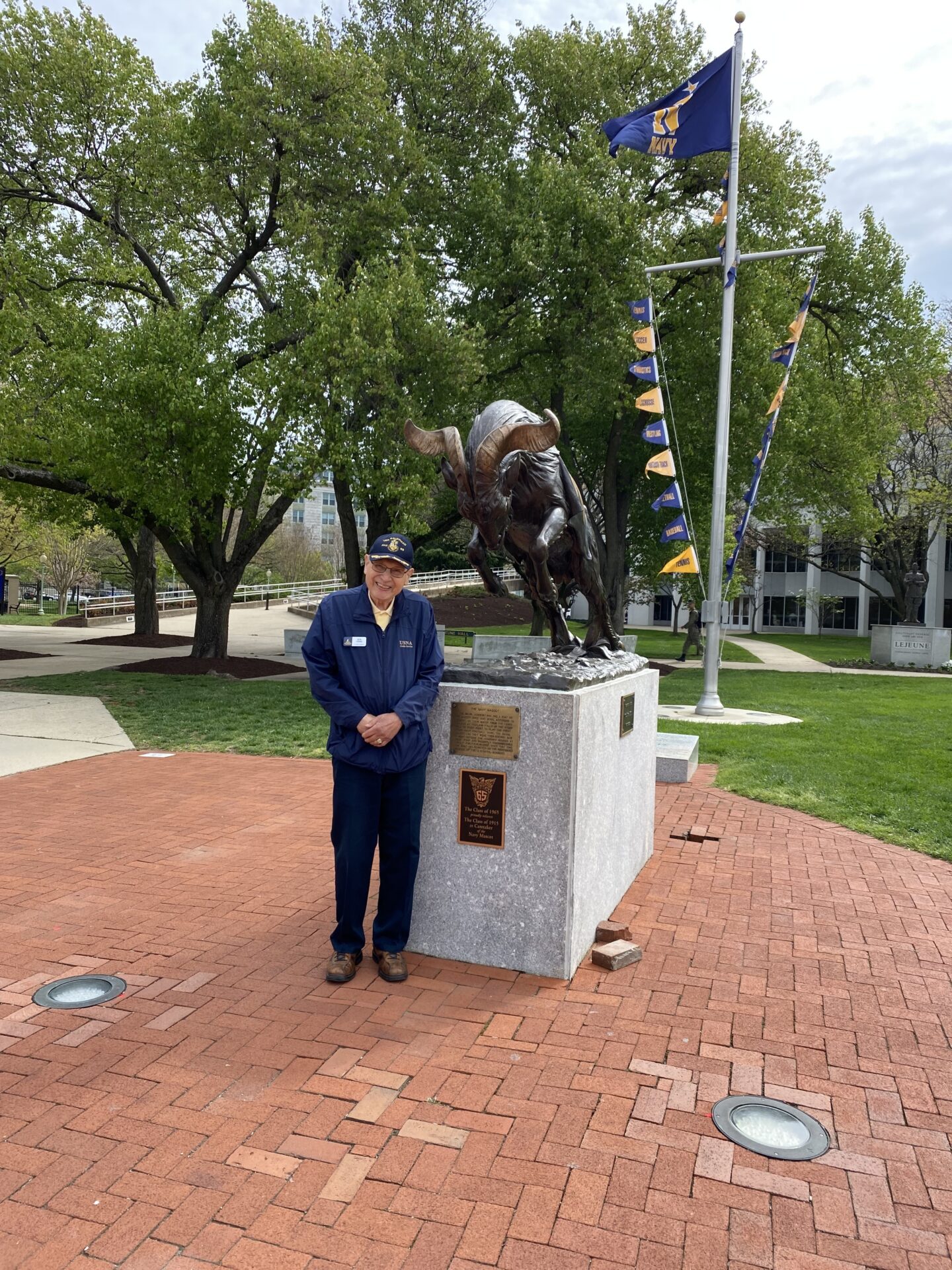 Bob, being the absolute gentleman that he is, answered all my questions and bestowed his bank of knowledge unto me.

Here are a few fun facts I took with me from my time with him:

If you’re in town, this is a must-do. 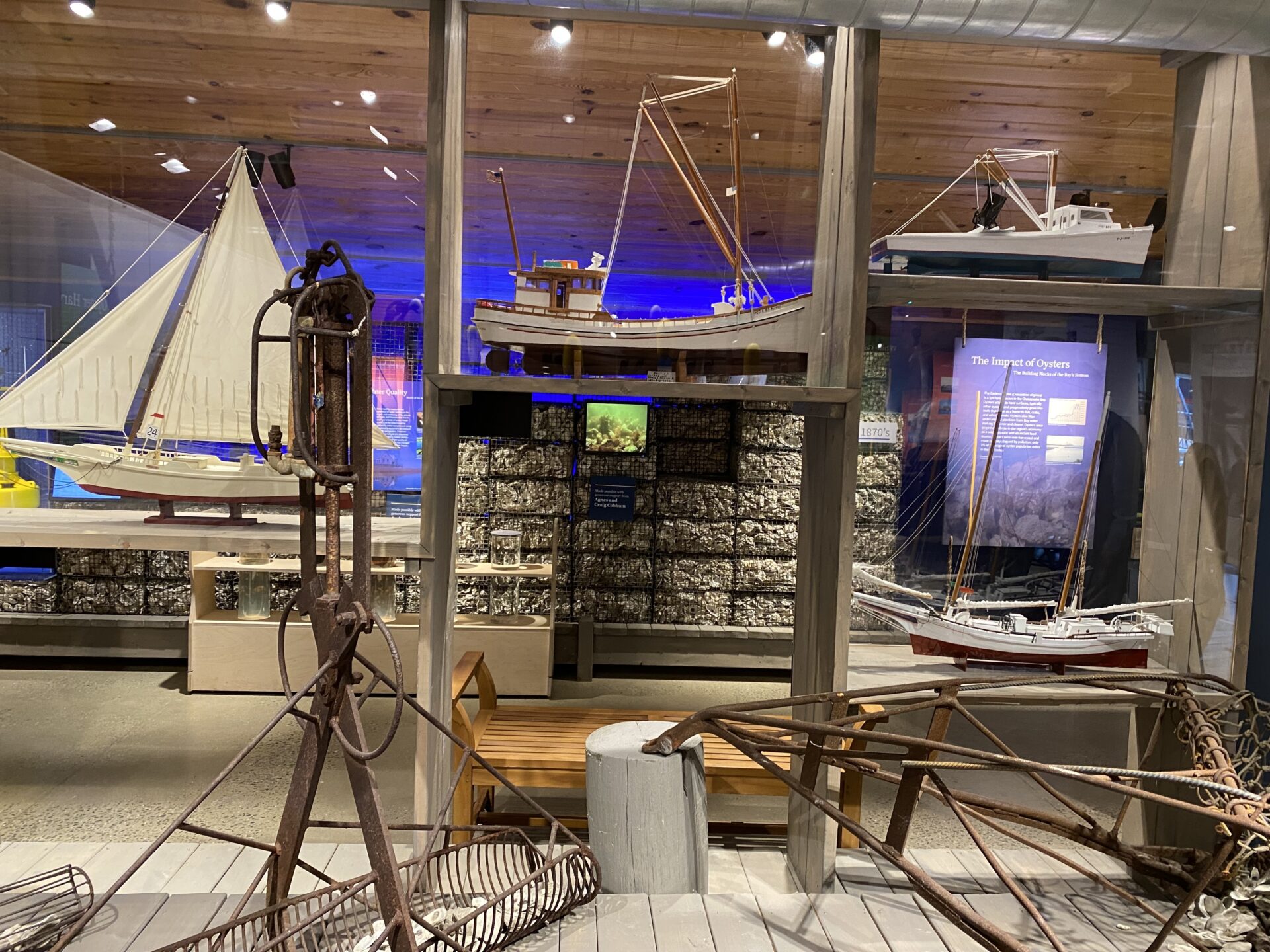 The waters of the Chesapeake Bay are an important part of the Maryland story. Entire towns were built around the lucrative crab and oyster harvesting industry. But as we’ve seen time and time again, too much of a good thing leads to no good.

And after decades of polluting and over-harvesting the bay, its ecosystem was in serious trouble. Luckily legislation and education have helped to begin turning things around.

That’s where the Maritime Museum, located in a former oyster packing plant, comes in. Along with providing visitors with the fishing history of their backyard, the museum is committed to educating people about maintaining, protecting, and preserving their local waters.

I spent a good amount of time exploring their brand new exhibit entitled Our Changing Waterfront. With interactive displays and historical pieces you can touch, it gives you a well-rounded understanding of Annapolis’ beginnings. 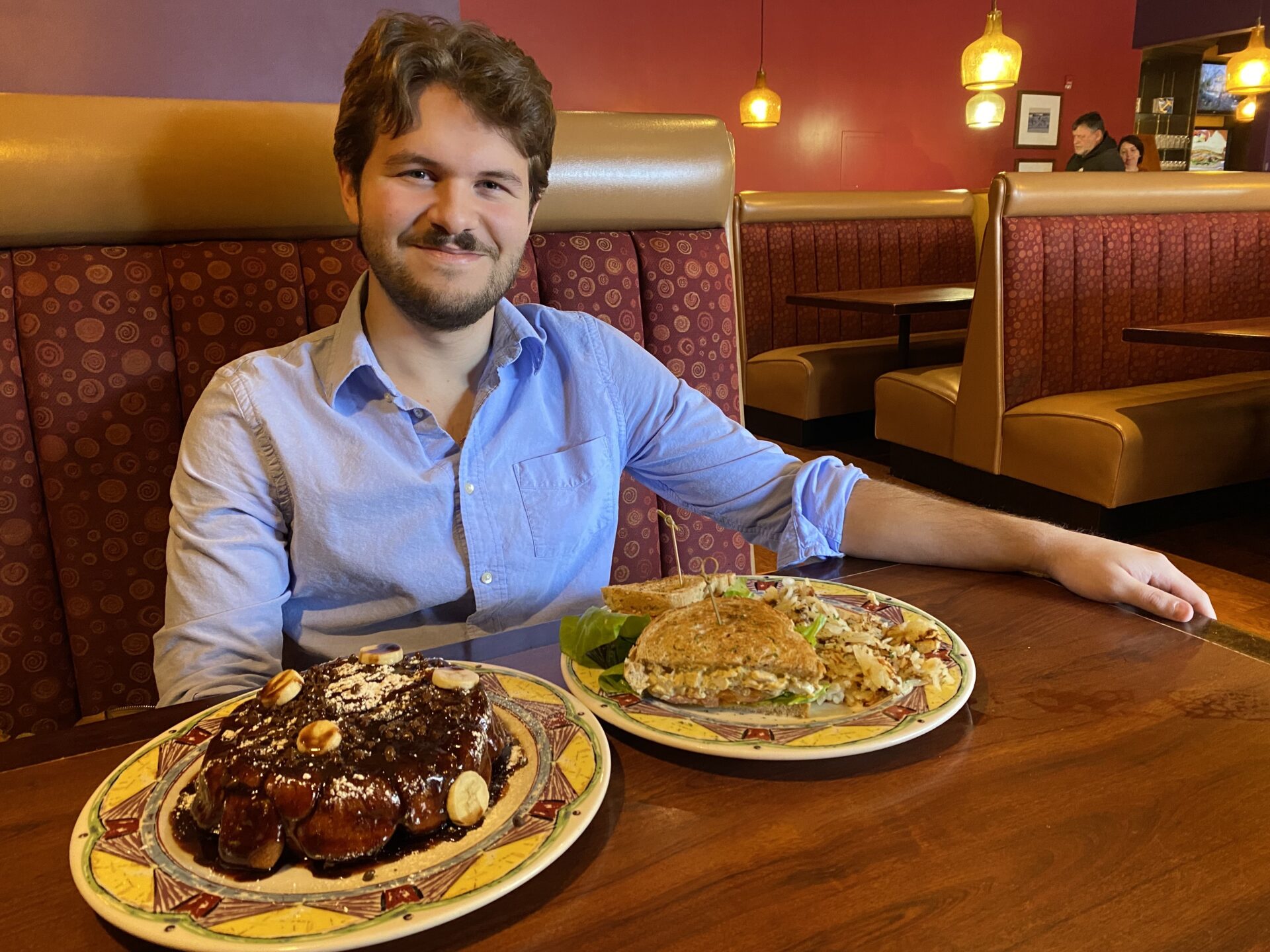 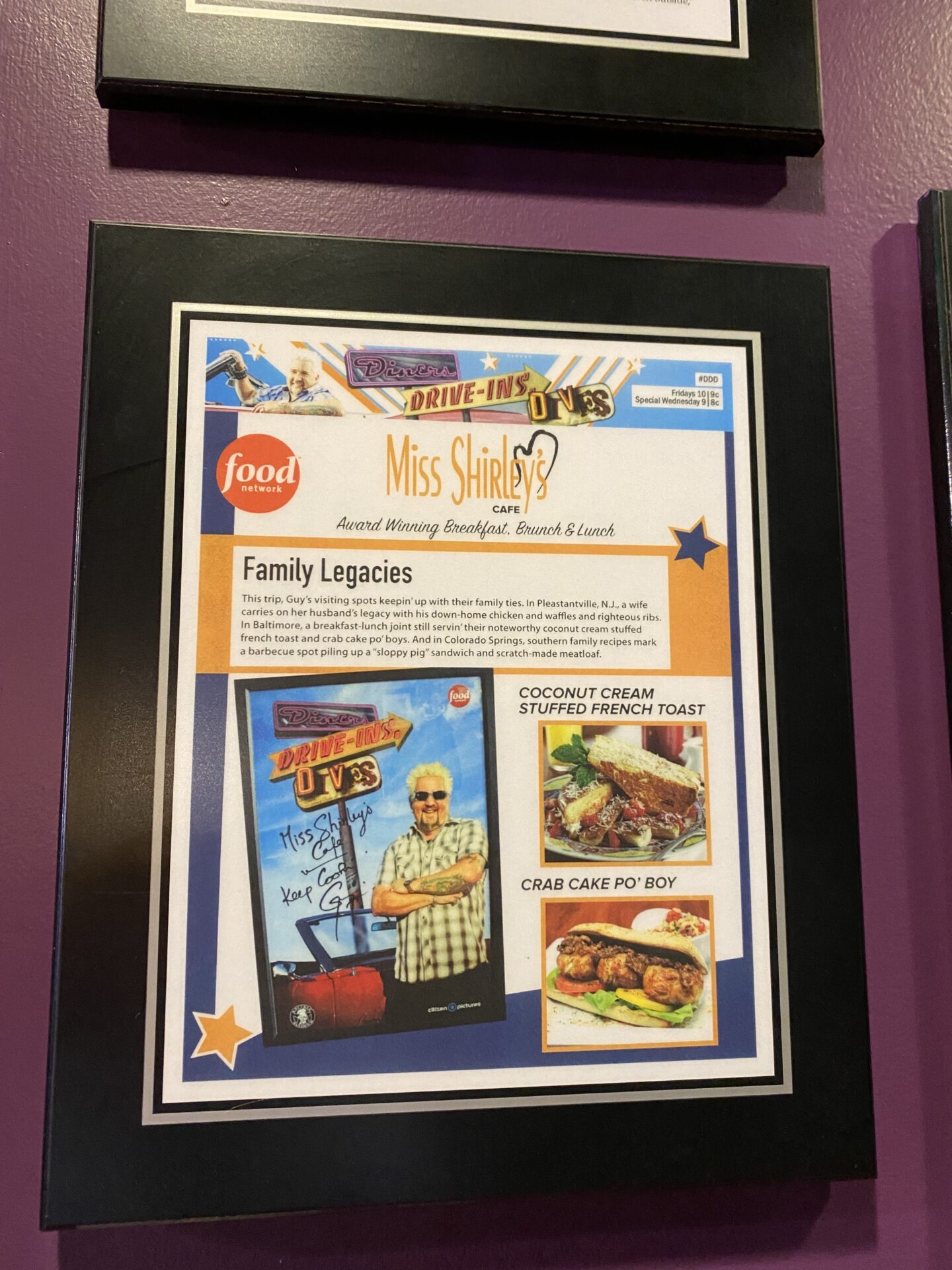 If you’re looking to get your day started on a hearty and delicious note, the legendary Miss Shirley’s is the way to go. This all-day breakfast joint has become an Annapolis staple over the past 15 years. The award-winning restaurant, which was featured on Diners, Drive-ins and Dives, offers a unique blend of Maryland seafood and Southern-style cooking.

I ordered the classic egg salad, which came with an incredibly generous portion of sides. I also couldn’t leave without trying some of their famous sticky and sweet monkey bread, which, I can confirm, is certainly worth the hype.

Another delicious breakfast joint in Annapolis is none other than Iron Rooster. While it’s open for dinner and cocktails in the evening, the waterfront eatery, which overlooks City Dock, features one-of-a-kind breakfast dishes like shrimp and grits, chicken and French toast, and their famous Roostarts — Iron Rooster’s take on the homemade Pop-Tart. 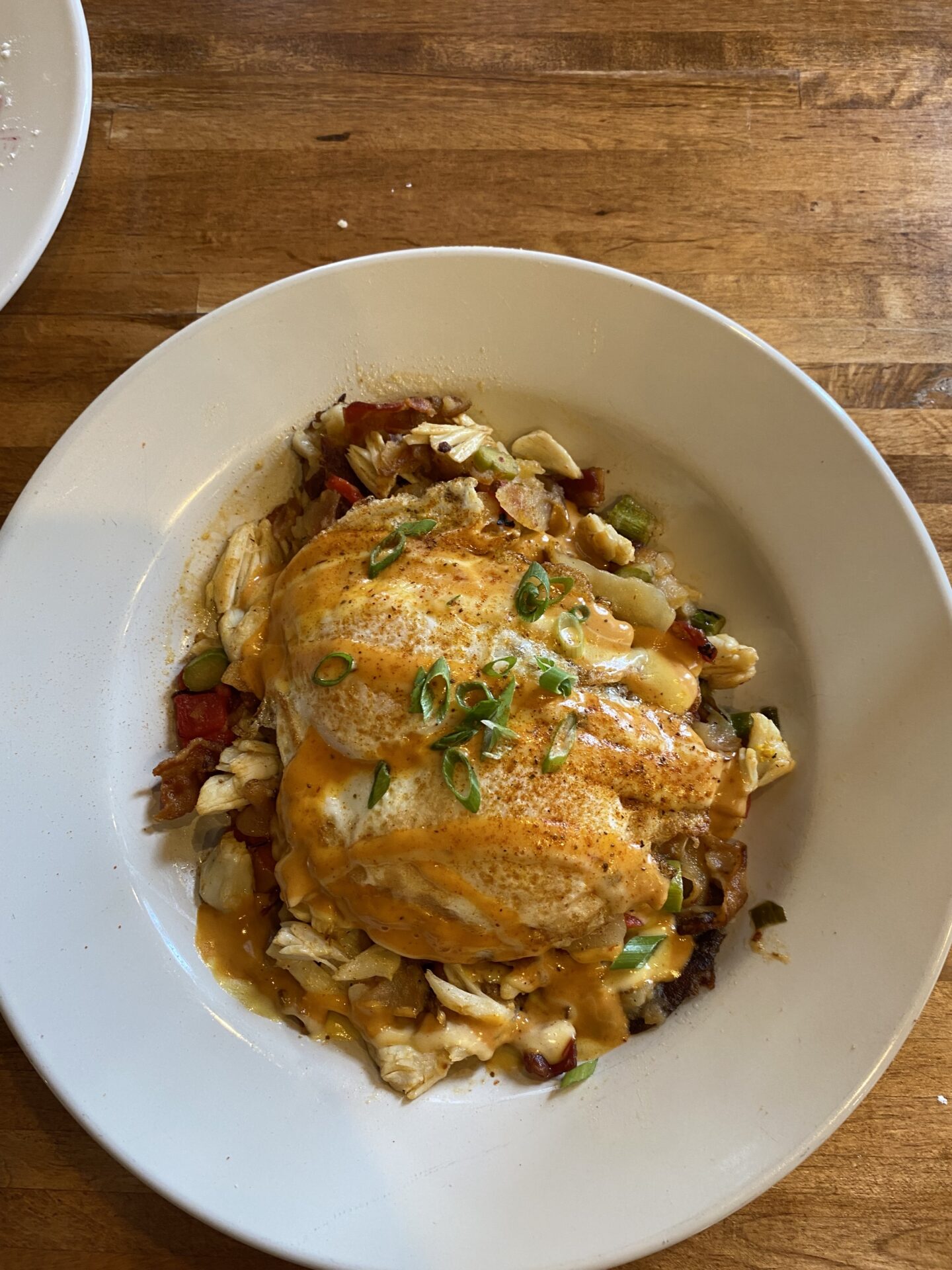 While I opted for the crab hash, a delicious mishmash of Maryland crab meat and Eggs Benedict, I made sure to save room for a Roostart, and boy am I glad I did. As someone who’s never been crazy about Pop-Tarts, these pastries shattered my perception of what the mediocre Kellogg’s snacks could and should be.

They’re also delicious at any time of the day 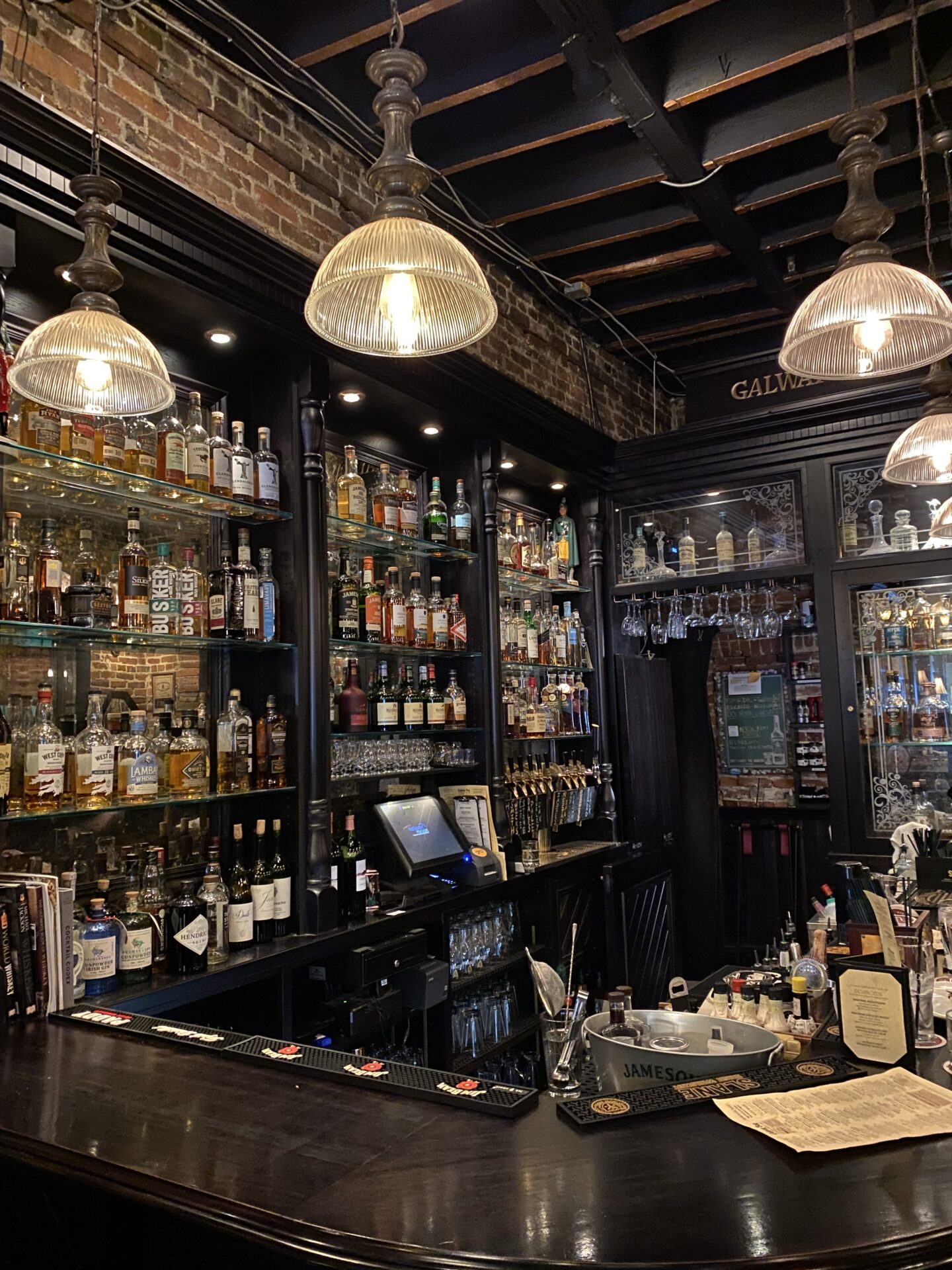 I popped into Galway Bay for a bite and pint as the early rumblings of their weekly trivia night was getting underway. After only a few minutes inside, I was able to confirm that this Irish-owned pub is the real deal. The TV-free bar and restaurant, which resides in a historical building from the 1840s, has been serving up proper Irish fare for nearly 25 years. 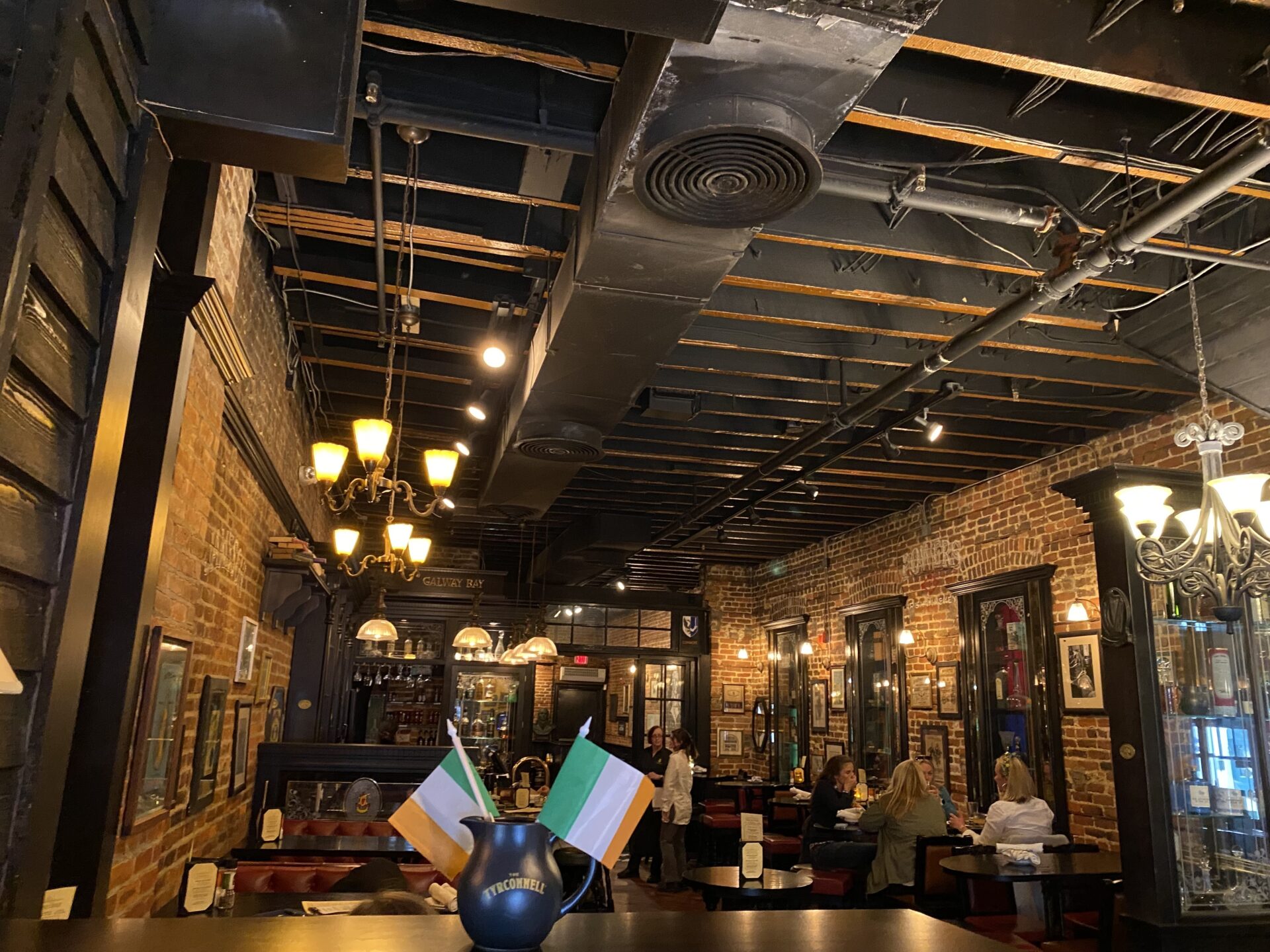 Simple yet well-executed dishes like the fish and chips, legendary corned beef Reuben, and delectable shepherd’s pie all come highly recommended by customers.

Other unique aspects of this pub include  Maryland-brewed Guinness Blonde on tap and over 90 bottles of authentic Irish whisky, which make up the largest collection in the entire state. 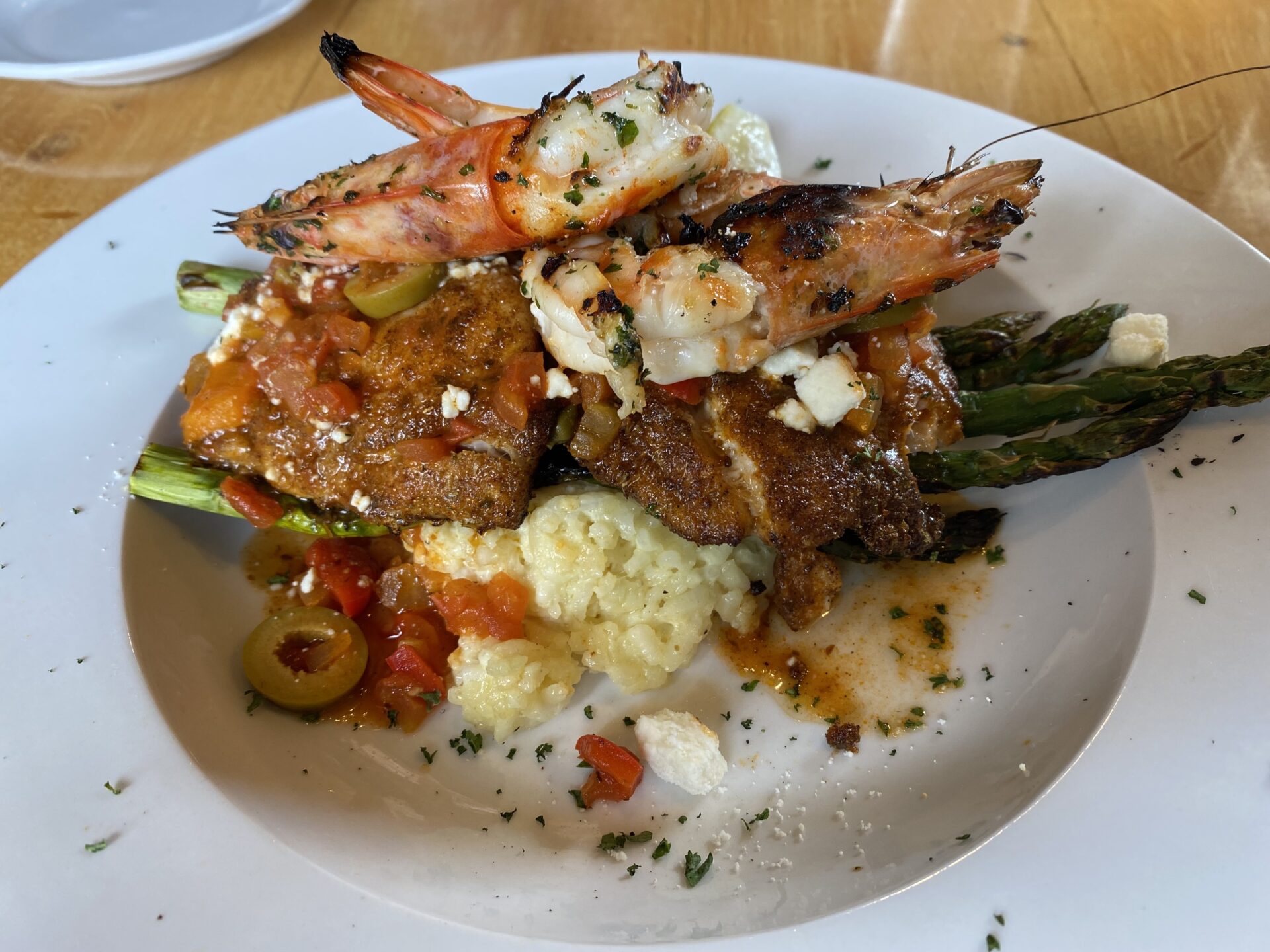 Of all the crab cakes I managed to eat in my short time in Maryland (more than you might think), the ones at Boatyard Bar and Grill were my favourite. And I would not be alone in thinking that.

The Jimmy Buffet/Ernest Hemingway style fisherman’s joint is also a seafood bar lover’s paradise. “We have a whole bay full of every seafood you can imagine,” says head chef Cory Fey. “And working with seasonal ingredients is kind of the core of what makes the Boatyard the Boatyard.”

The restaurant’s general manager Kevin Schendel confirmed that the Eastport eatery ships over 90,000 crab cakes across the country every year. And back in 2010 then-First Lady Michelle Obama walked in to try one for herself, calling it the “best crab cake” she’d ever eaten. “That was a wild day,” said Schendel, who believes that the dish’s simplicity is the secret behind its esteemed reputation. 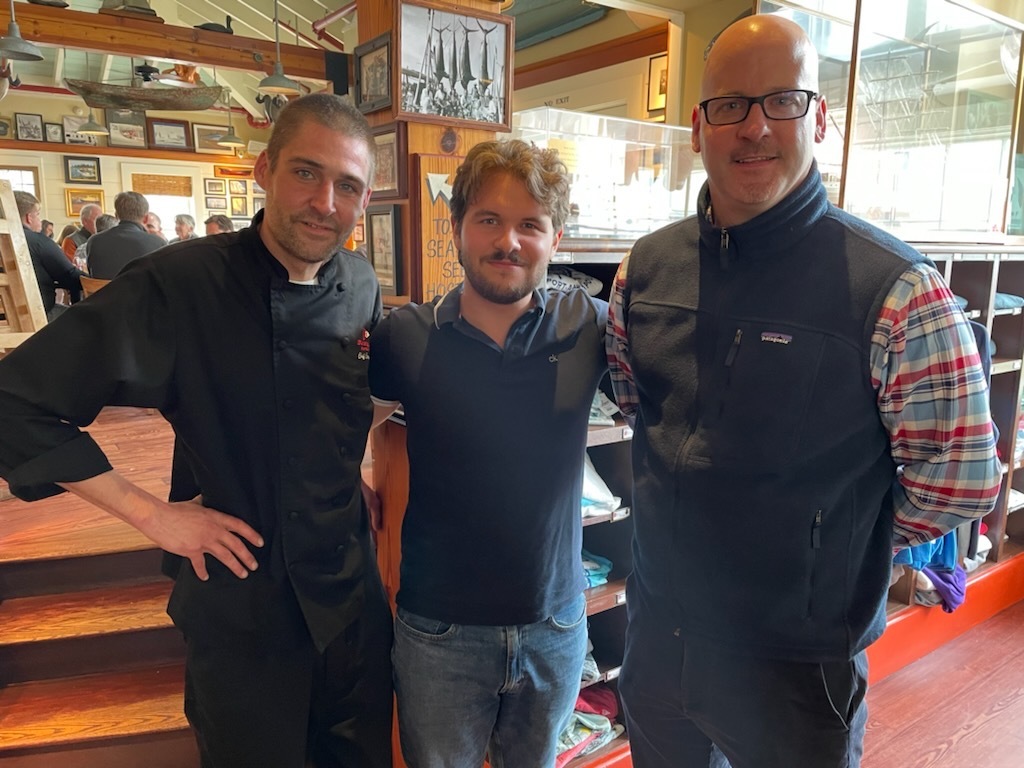 “We try not to mess with it too much,” says Schendel. “Let the crab cake speak for itself.” 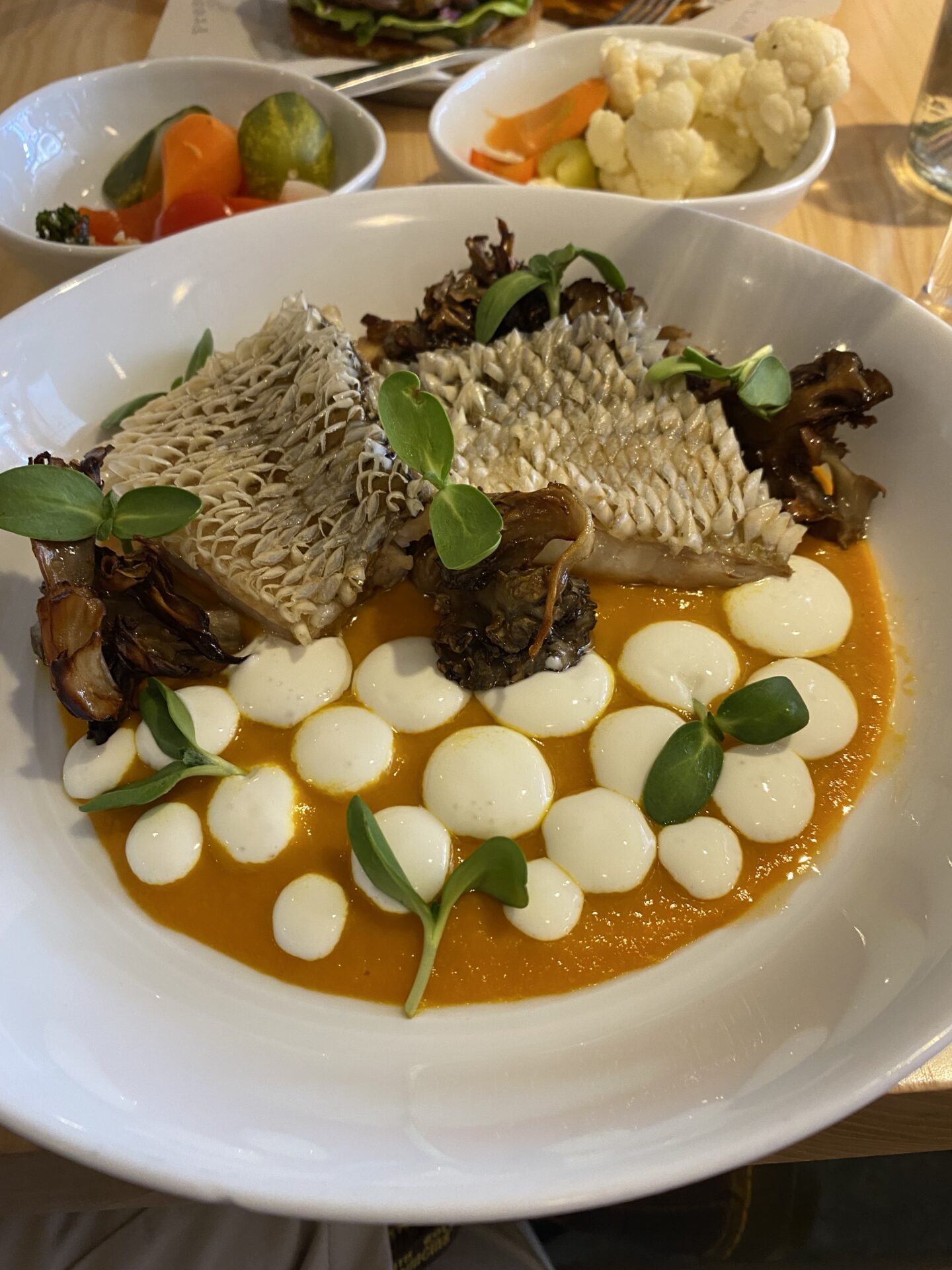 Preserve is different from most restaurants in the area.

Minimal waste and optimal freshness are things that co-owners Michelle and Jeremy Hoffman pride themselves on. As a result, the farm-to-table gourmet menu changes from month to month. The husband and wife duo say they are focused on sustainable and local products and passionate about pickling, preserving and fermenting. 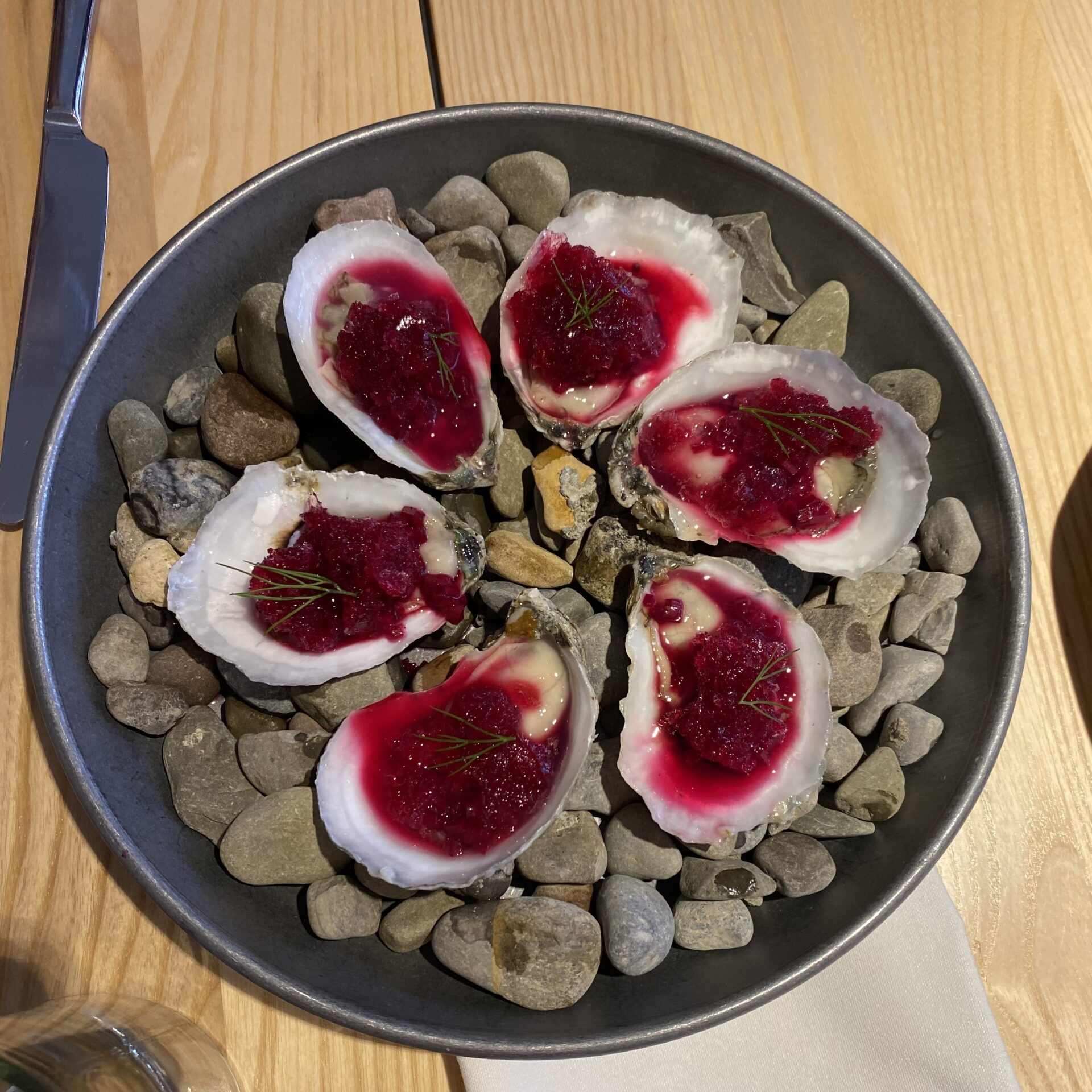 I was treated to a nice spread that included rockfish, perogies, beet-infused Maryland oysters and an Indian-style kale salad topped with cardamom yogurt. As someone who usually avoids kale (it’s a texture thing), I was surprised when their crispy, sweet kale mélange ended up being my favourite part of the meal.

Any place that prepares one of my least favourite ingredients is worth it in my book.

Carrol’s Creek, which overlooks the Eastport dock and Annapolis’s weekly boat races, is a seafood lover’s paradise. While the view is spectacular, the food is even better. it’s also the perfect spot for a nice dinner after a day out on the water.

I dug into their deliciously creamy crab soup and sampled some local beer which is a perfect start to any meal. I then doubled down and followed that with one of their crab cakes. 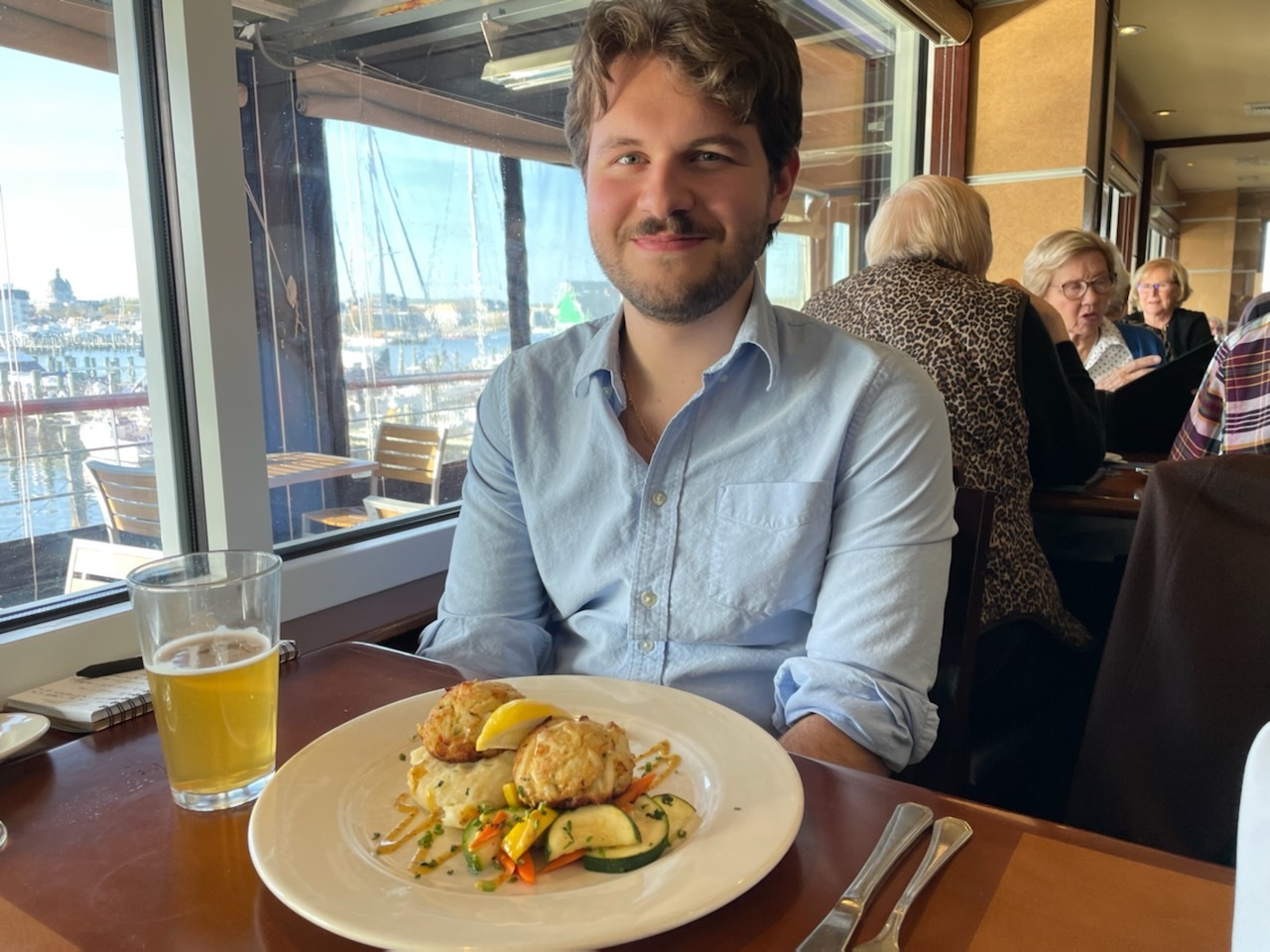 The real pièce de résistance, though, were the sea scallops in shredded phyllo. Sitting on a bed of wilted spinach, the dish is topped with lump crab, prosciutto and cream sauce their signature dish. The explosion of rich flavour is just as delicious as it sounds. It’s the appetizer you wish would never end.

If you’re in the neighbourhood, you simply must try it.

The author of this article was partially hosted by the Maryland Office of Tourism in partnership with Visit Annapolis and Anne Arundel County.