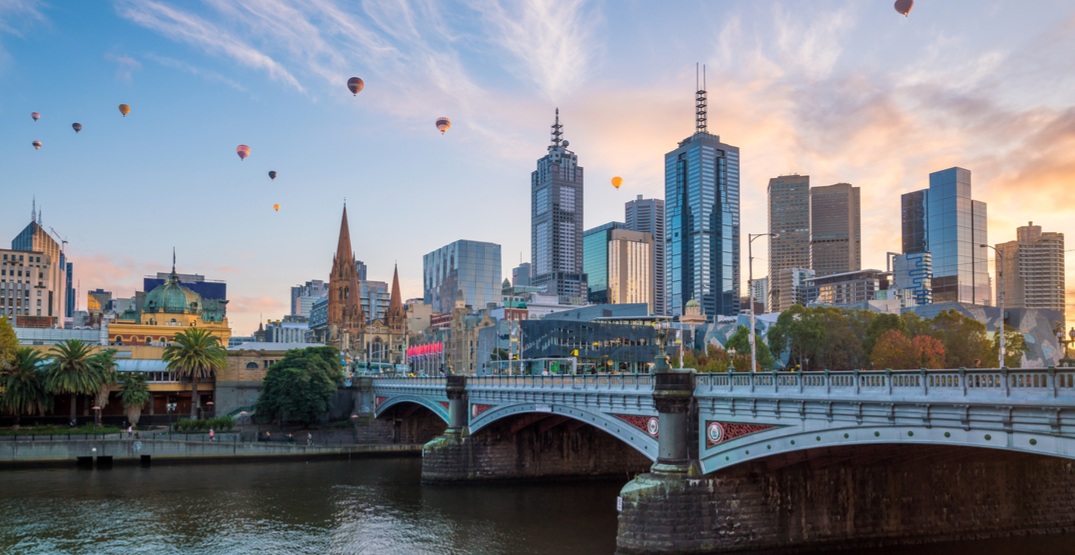 Melbourne is an extremely happening city – people are always out and about, going for food and drinks, attending a show, sporting event or festival. The Aussies are a welcoming bunch and you’ll never be short on friends or activities.

Depending on what time of year you’re going, make sure to check what kind of events are going on in the city during your stay – there’s sure to be something that tickles your fancy.

Here are a few of the top things to do in Melbourne!

Check out the graffiti 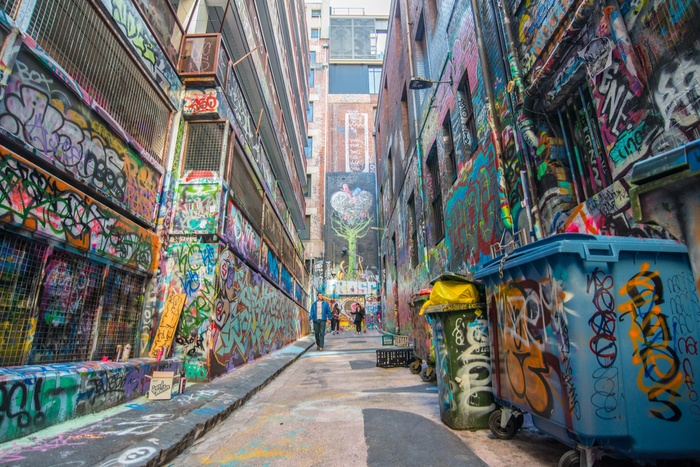 One of the main things that Melbourne is known for its vibrant, abundant street art – you can find graffiti all throughout the city and suburbs. Certain areas of the Central Business District (CBD) feature full alleys covered in art. Strike a pose and get that ‘gram at hotspots like Hosier Lane or ACDC Lane. 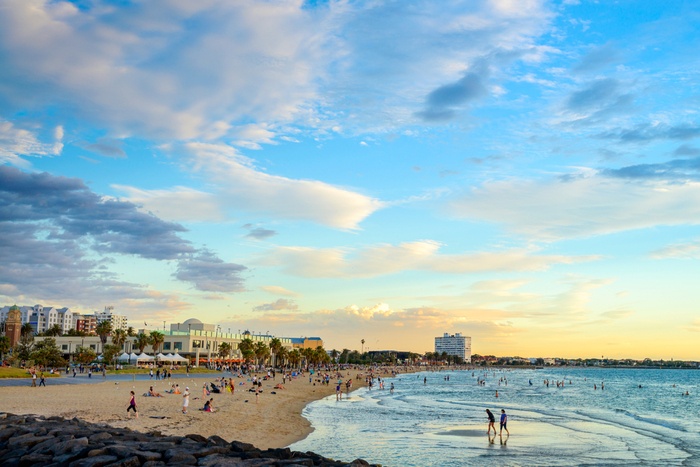 This laid-back waterfront suburb is a great place to come lounge at the beach, hit up the amusement park, grab a bite to eat, or do some shopping. In Melbourne’s hot summers, the locals will flock to the beach and just lay in the water to cool off. And don’t forget to check out the penguins after sunset! 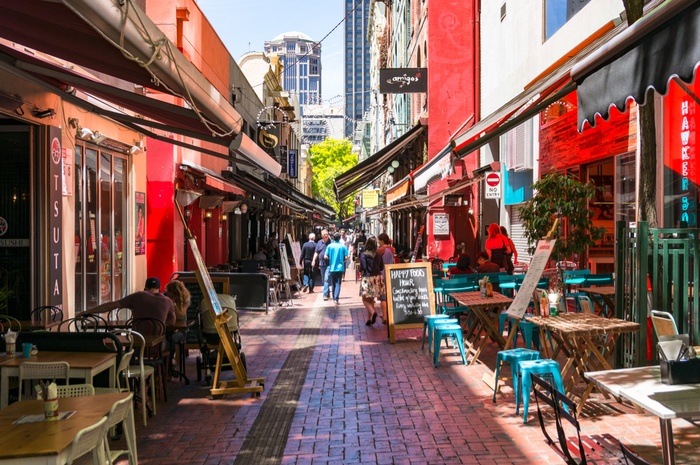 Melbournians take their coffee seriously. You won’t be able to walk a street in the CBD without seeing the locals sipping coffee at cafés or a terrace. Grab a cup of whatever tickles your fancy and post up for some people watching at the alleys of Hardware Lane or Degraves Street, or a café in Fitzroy. 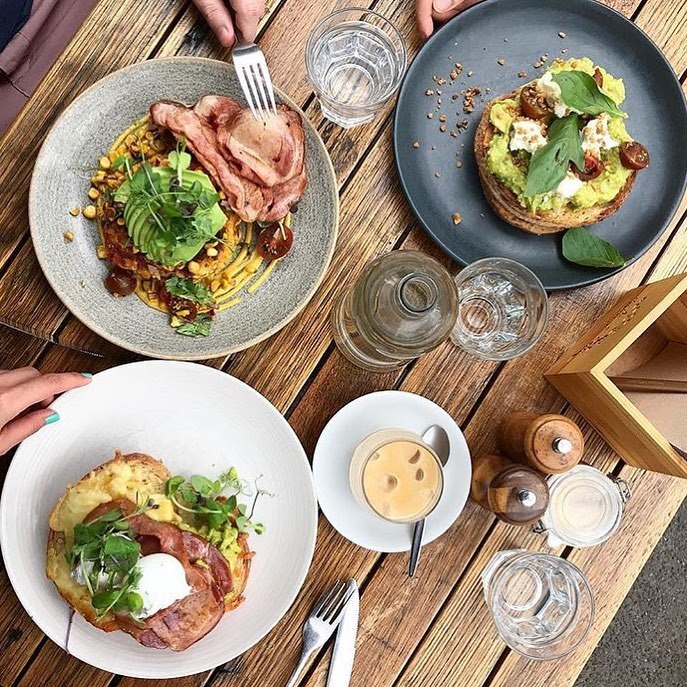 Melbournians love their brunch. Weekend brunch with friends is a staple, and you will find the most decadent brunch items available. There’s awesome brunch throughout the city, but we would recommend getting the Loves Feast at A Thousand Blessings Café – poached eggs, maple glazed bacon, avocado smashed with ricotta and feta on melted cheesy sourdough. Excuse me for drooling while I typed this. 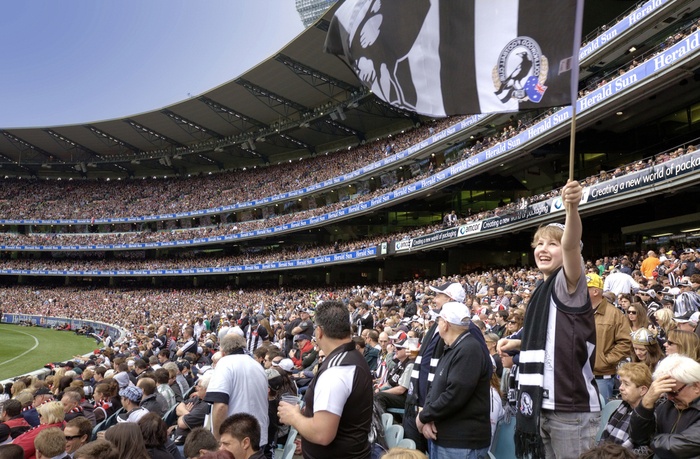 Melbourne, like the rest of Australia, is huge into footie, Aussie Rules, AFL, or whatever you prefer to call it. Pick your team, throw on some war paint, grab a beer, and join in on the fun – just keep in mind that if you haven’t lost your voice by the end of the game, you’re not doing it right.

If you’re visiting during the offseason, look into a cricket game instead.

Melbourne is often called the sporting capital of the world (at least the locals think so), so you will always find something to satisfy your sporting appetite! 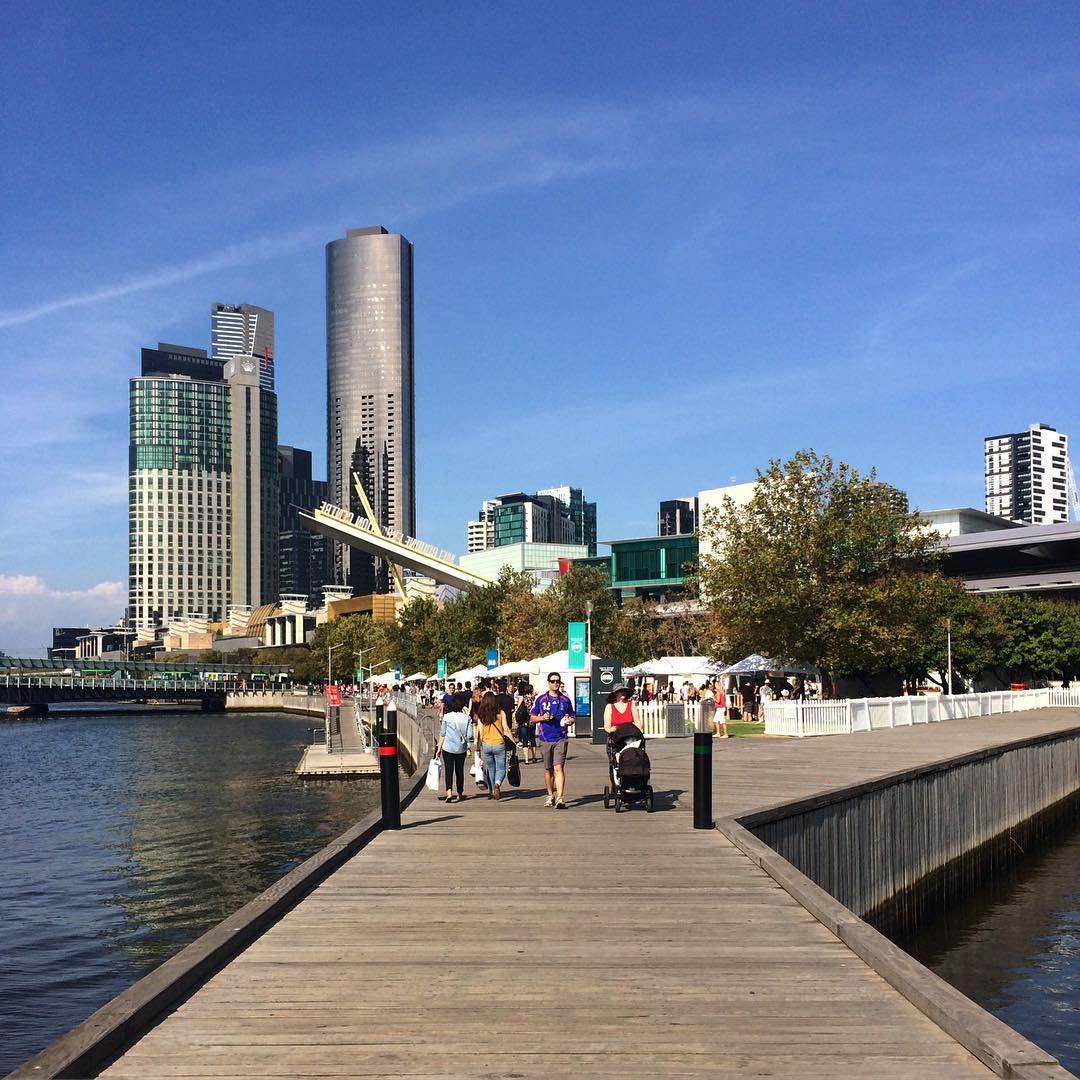 A hotspot for food, entertainment, shopping, bars, and epic city views, the South Wharf Promenade is one of Melbourne’s must-visit areas. Located right on the Yarra River, you will always find something going on at this wharf! It’s our personal fave spot for a happy hour patio drink. 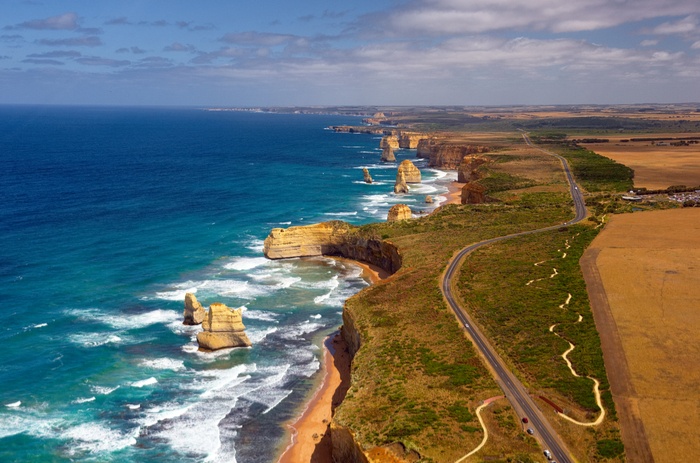 Cruise down the Great Ocean Road for stunning views of the golden Aussie beaches, finishing at the Twelve Apostles (okay, more like seven apostles now – thanks, erosion). The drive takes about four hours along the coast – that’s four hours of incredible seaside views. If you’re lucky, you’ll spot some ‘roos hopping along the backroads or some sleepy koalas at Kennett River. 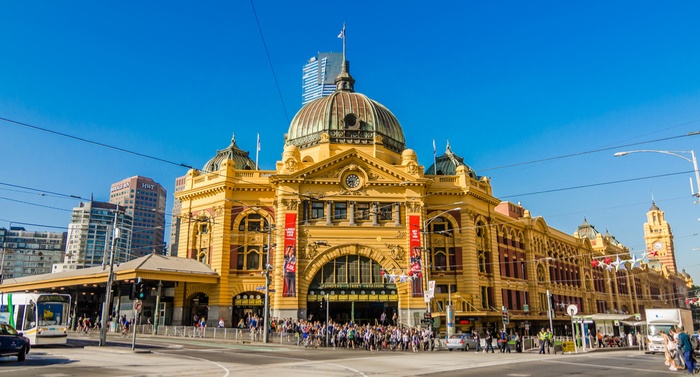 Located in the heart of the CBD, Flinders Street Station is an iconic symbol of the city and a great place to kick off your walking tour or meet up with friends.

Serving the entire metropolitan rail network, it’s the busiest railway station in the southern hemisphere and also makes for a great photo op thanks to its yellow facade and green copper dome. Surrounded by art galleries, markets, office and retail space, this is definitely the most bustling area of town. 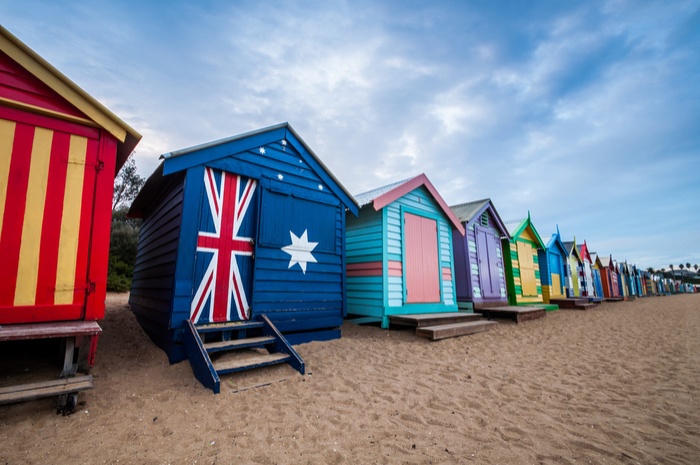 30-45 minutes from the heart of Melbourne exists an Instagrammer’s paradise at the colourful row of Brighton Beach huts. You will have to fend off crowds of tourists, but hey, if you can’t beat ’em, join em! We can confirm that the huts are actually quite cute and make for a great photo backdrop. Many have been transformed into a little beach oasis, with lounge chairs, beachy decor, or else just acting as a storage shed for beach toys.

Check out the penguins 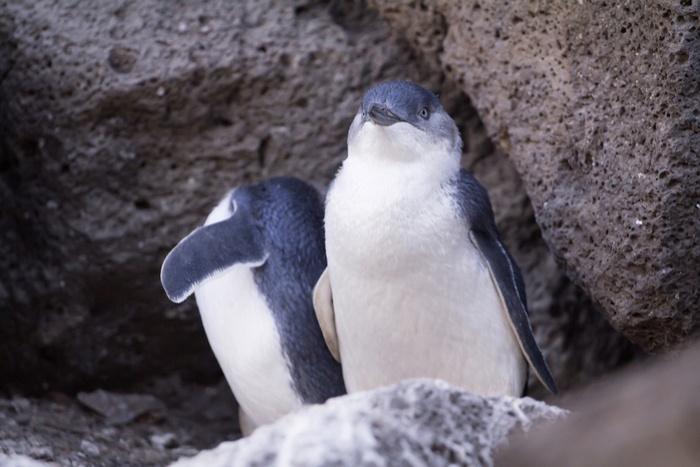 You may not have expected to see penguins marching in Australia, but that is exactly what happens once the sun sets at the breakwater at St. Kilda beach. You can also spot the little tuxedo-wearers at the Penguin Parade on Philip Island, only 90 minutes from Melbourne.

Gamble at the Crown Casino 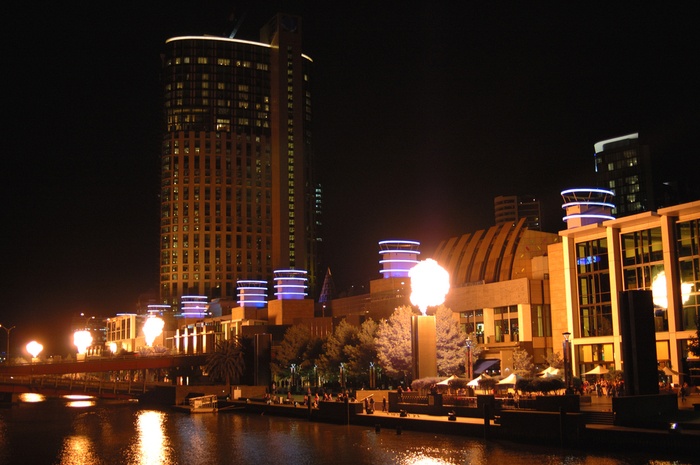 Not that we encourage gambling (unless you’re a blackjack boss like us) but if you’re gonna play a round of roulette anywhere, the Crown Casino is definitely an impressive spot to do it. We admittedly have not measured all the casinos in the world, but it’s said that Crown is the largest casino in the Southern hemisphere. It is right along the Yarra River and definitely worth checking out.

Check out the Aussie Open 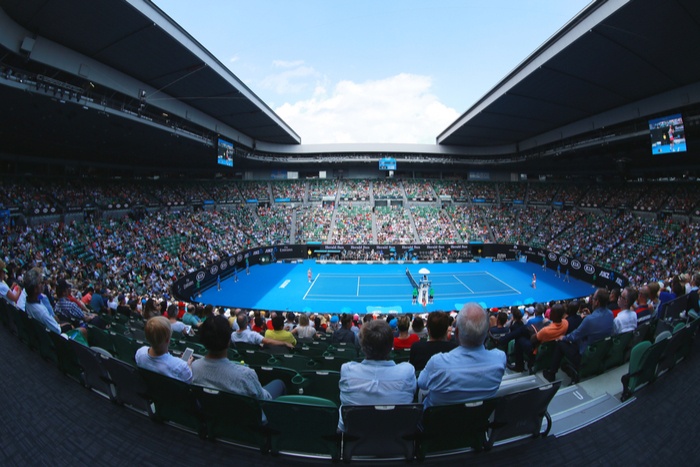 Every January, Melbourne attracts fans from across the globe for one of the largest and most prestigious grand slam tennis tournaments in the world: the Australian Open. The stadium is within walking distance from the heart of the city so even if you don’t get tickets to a match, you should definitely still stop by the grounds to check out the beer gardens, giant screens live streaming the action, food stalls and more. 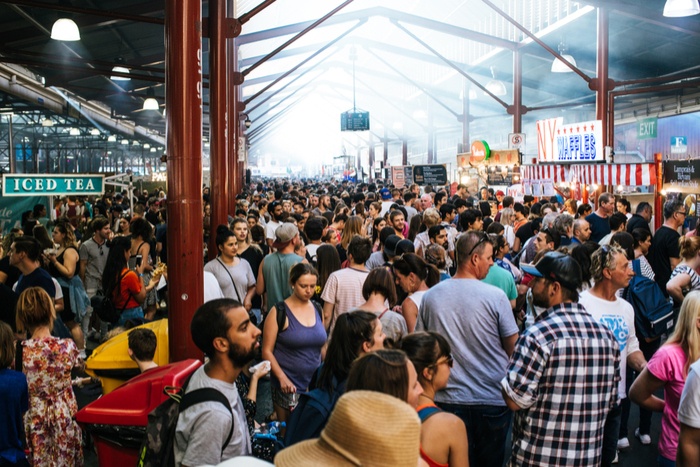 Make sure to come on Wednesdays in the summer or winter for the night market for a fun display of live entertainment, food stalls, festival stalls, and over 130 merchandise traders for all your take-home goodies.

Bike to the beach 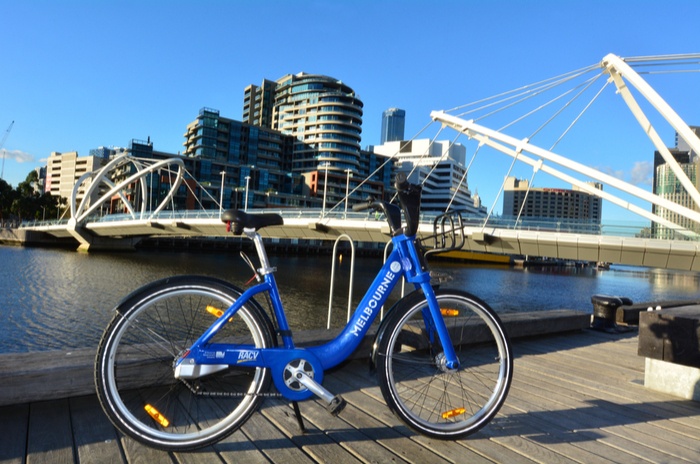 Melbourne’s CBD has bike rental stations every few blocks, and you can easily hop on one to cruise along the Yarra River and take the back roads all the way to the beach. There are many patios along the way for happy hour pitstops (a necessity), and it’s a great way to see the city. 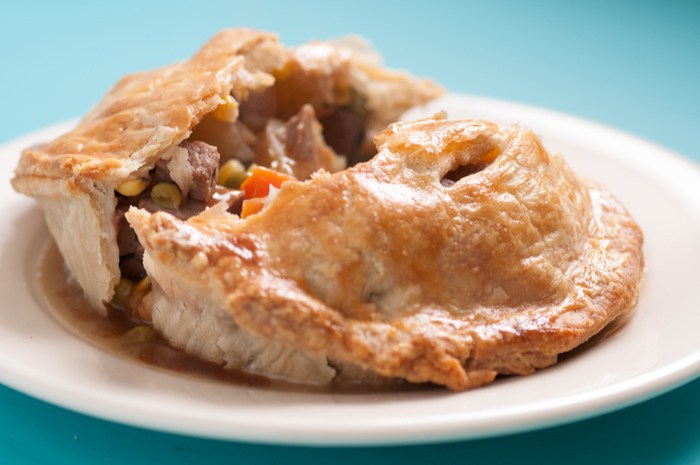 You can’t come to Melbourne without trying Australia’s national dish, an Aussie pie. These small savoury snacks are filled with your choice of topping, typically including minced meat and some sort of delish combo of vegetables and gravy. They are the perfect treat for the road. 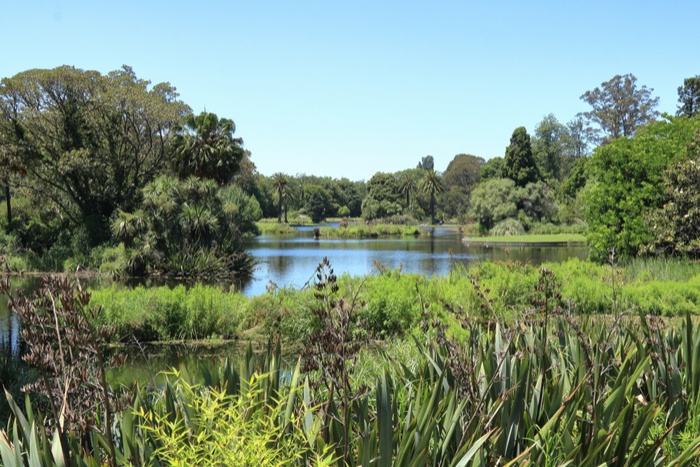 Right in South Yarra, you can find a garden oasis at the Royal Botanic Gardens Victoria. This green space extends across 36 hectares that lead into the river and is covered with trees, garden beds, lakes and lawn. It’s a great place to go for a jog or just stroll around and take in some nature.

In a city that’s always got something going on, there’s a good chance that something is going on in Federation Square. This unique activity hub hosts spectacular public art, community celebrations, markets, and other cultural activities. Check what’s on ahead of your trip, or just show up and see for yourself.