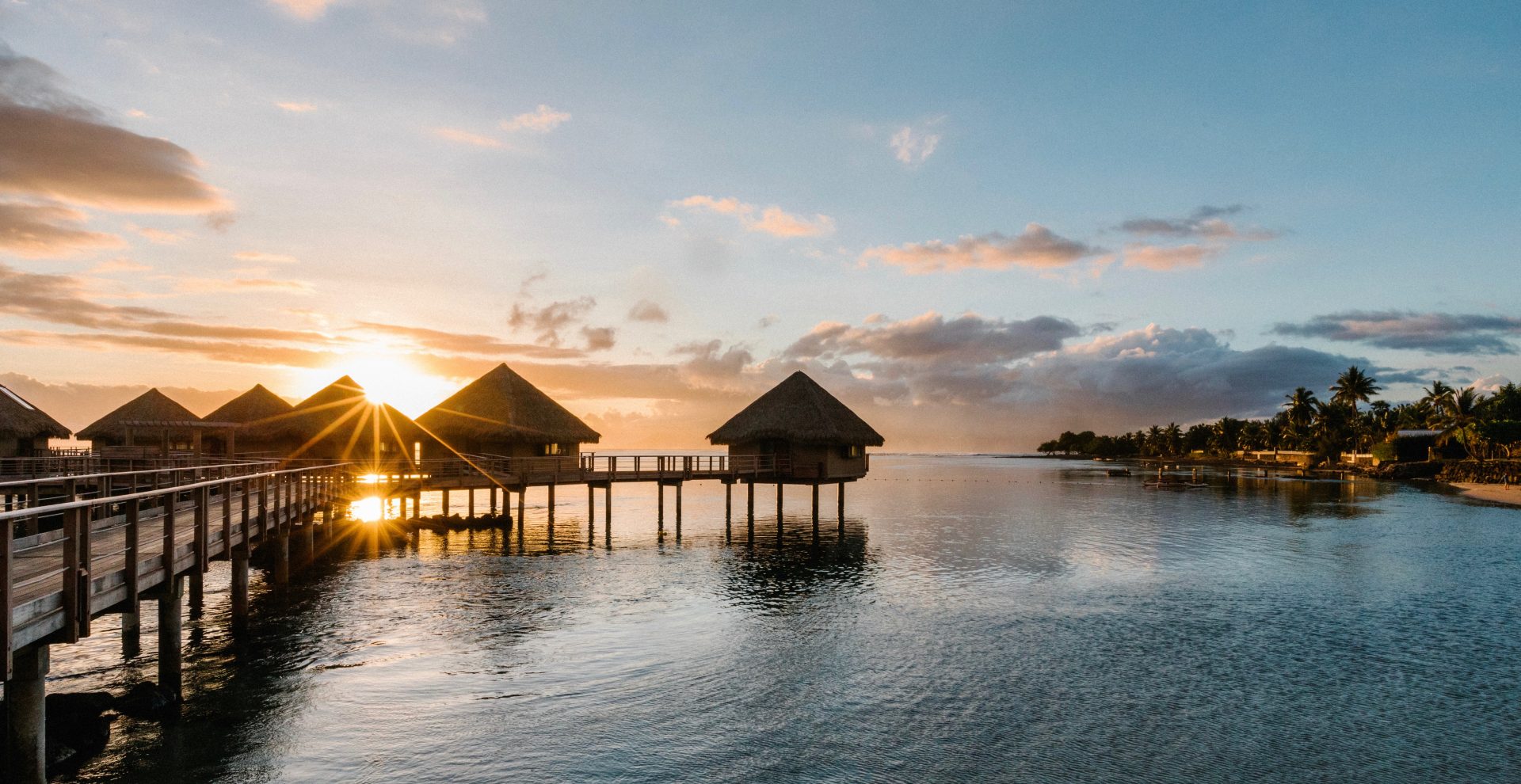 When it comes to booking a vacation, luxury and saving don’t often go hand in hand.

But since we believe in having your cake and eating it too, we’ve done the work for you to find a vacation of your dreams that will also keep your environmental footprint to a minimum.

Sounds too good to be true? Well, it almost is. Thankfully, the Islands of Tahiti are a real place, and they should be next up to visit on your eco-friendly bucket list.

With 118 islands in French Polynesia, we’re going to make it really easy by touching on only a few of the Society Islands (Tahiti, Moorae, Taha’a, Tetiaroa). Each of them offers a key to meeting all of your ecotourism dreams. 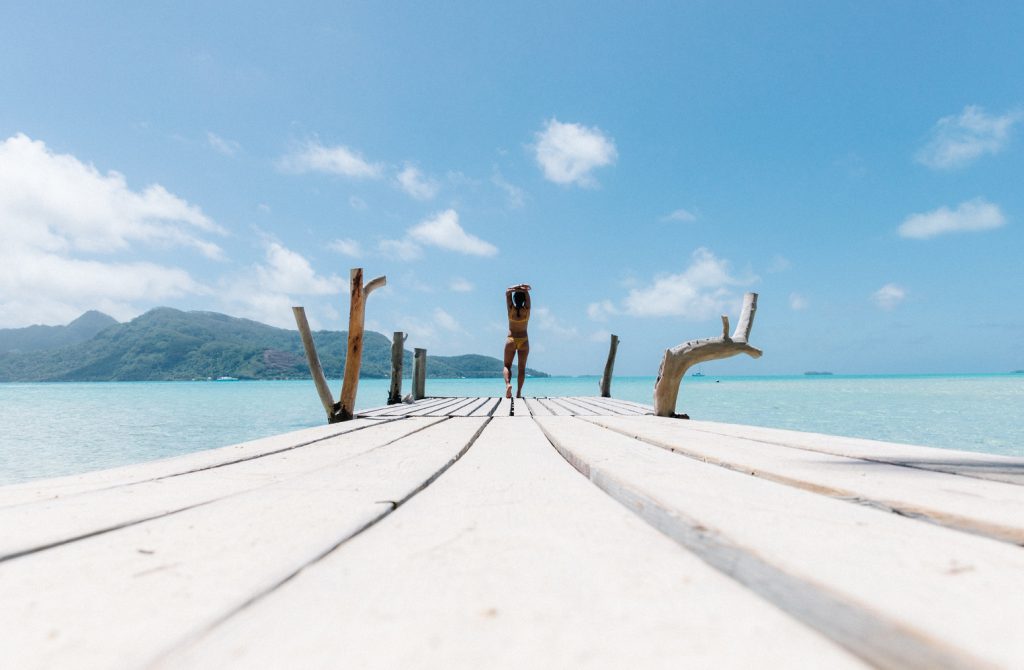 Thanks to French Bee, the first low-cost, long-haul airline to offer this North American route, you can get a flight directly from San Francisco to the big Island of Tahiti for as low as $330 CAD. Save yourself multiple layovers and unnecessary aircrafts by flying direct to Tahiti. Not to mention the price of a direct flight from SFO is quite an ideal number, so you can save your money for the stuff that really counts.

The Islands and their ecocultures 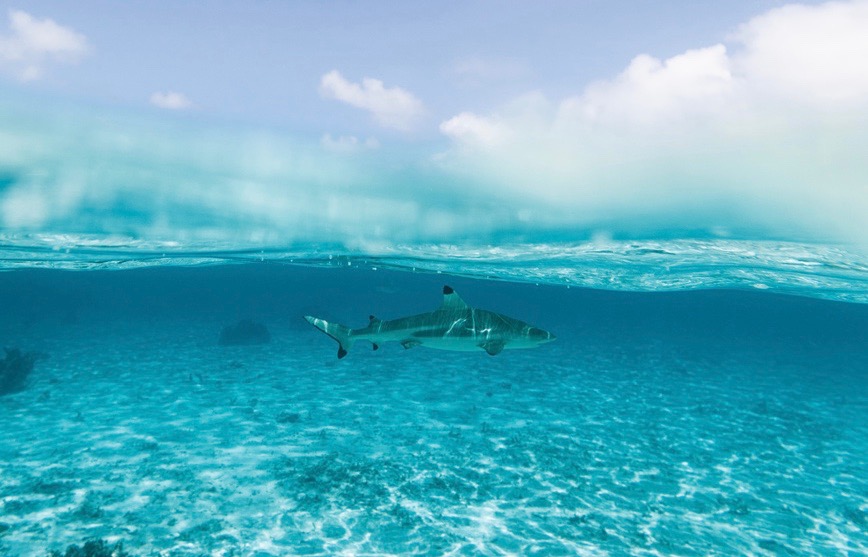 Similar to our western culture’s adored view on cats and dogs, the locals in Tahiti treat all the creatures of the ocean with an equal sentiment.

Many Society Islands restaurants follow traditional ways of fishing that depend only on families going out in traditional outrigger canoes (with no motors, just human power) and usually serve a main course that follows the catch of the day, which is usually accompanied by local vegetables grown in a garden on the restaurant’s property. To show utmost respect to the lifecycle of the fish, every part of the fish is usually incorporated into the meal and nothing goes to waste.

Because of Tahiti’s warm climate, things like tropical fruits, flowers, and vanilla, all thrive unbelievably well with out the use of pesticides and heavy machinery. The environment also makes it easier to produce rum, and companies like Pari Pari Rum in Taha’a are changing the way we consume and enjoy alcohol. If you’ve ever wondered how alcohol was produced and want to know how to do it right, a distillery tour in the Island of Taha’a is a must. Pari Pari Rum is unique to the Islands as a virtually zero-waste facility that not only produces craft rum but also coconut oil, tamanu oil, and soap, all while using only natural and raw products that come from the Island of Taha’a. This company controls the entire process from picking sugar cane to delivering the finished products, wrapping it into a perfect farm-to-table-style package that include using 100% of the raw product and making sure no waste or greenhouse gases are produced from their processes.

Although it’s hard to speak for every food production business on each of the Society islands, there seems to be a general understanding where each one respects the diversity of the land and the ocean in a way that speaks to consuming mindfully and consciously. 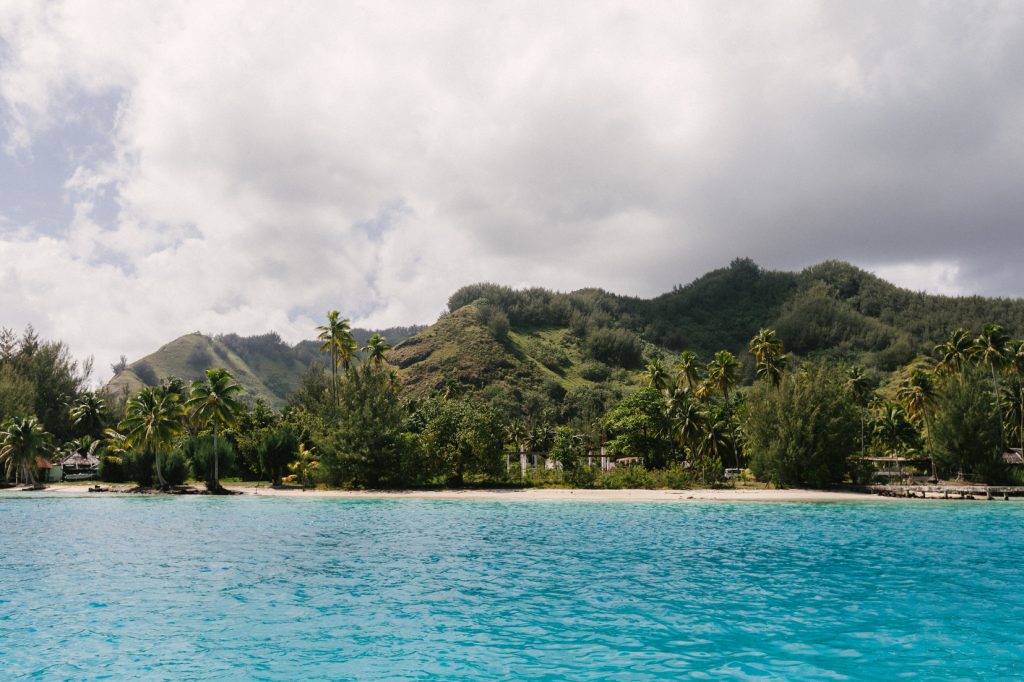 Speaking as a Vancouverite (we Vancity folk LOVE our bike lanes), the Society Islands have well-manicured bike lanes that make it super easy to skip motorized transport and go on two wheels. Island culture, no matter where you go in the world, generally follows the same rule: go slow and take it easy.

Each island is surrounded by a reef break, and the areas of water in between the reef and land are called Lagoons and are home to hundreds of species of fish, sharks, rays, and turtles. The law governed by the locals is that you aren’t allowed to go faster than 5 km per hour in the lagoons; this is to respect the wildlife that inhabits the lagoons. 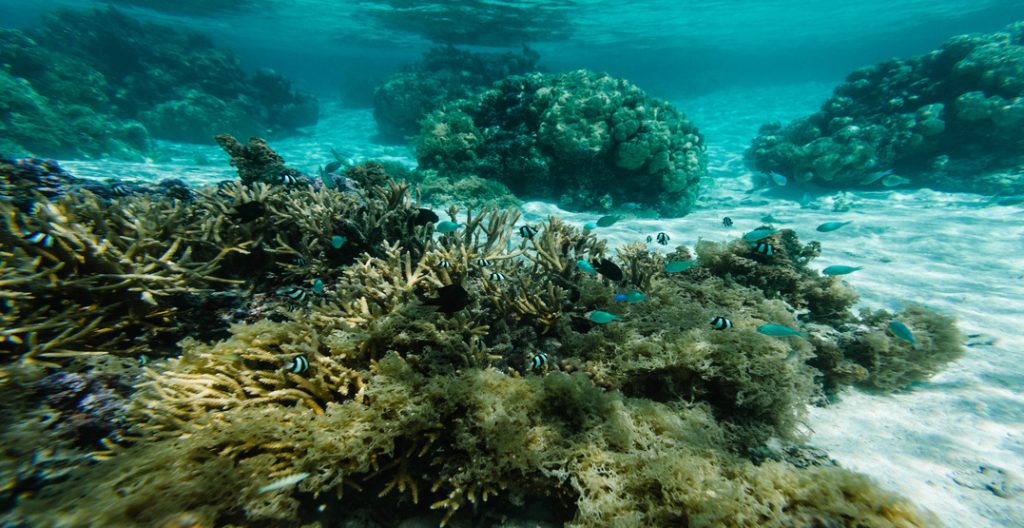 A local excursions company called Captain Taina takes tourists on an intimate yet sustainable excursion of the lagoon allowing their guests to have experiences underwater with the local turtles, black tipped sharks, and stingrays. What’s really cool about this company in particular is that it is rich with educational tidbits about Tahitian culture and history and the local sea animals that live among them. Beyond that, because they spend so much time in the lagoon, every day they scrub the cultural statues in the ocean that were placed to help Tahitians keep ties to their religion, and pick up waste they find in the lagoon that include lots of glass bottles, fishing debris, international waste, tires, and metal. 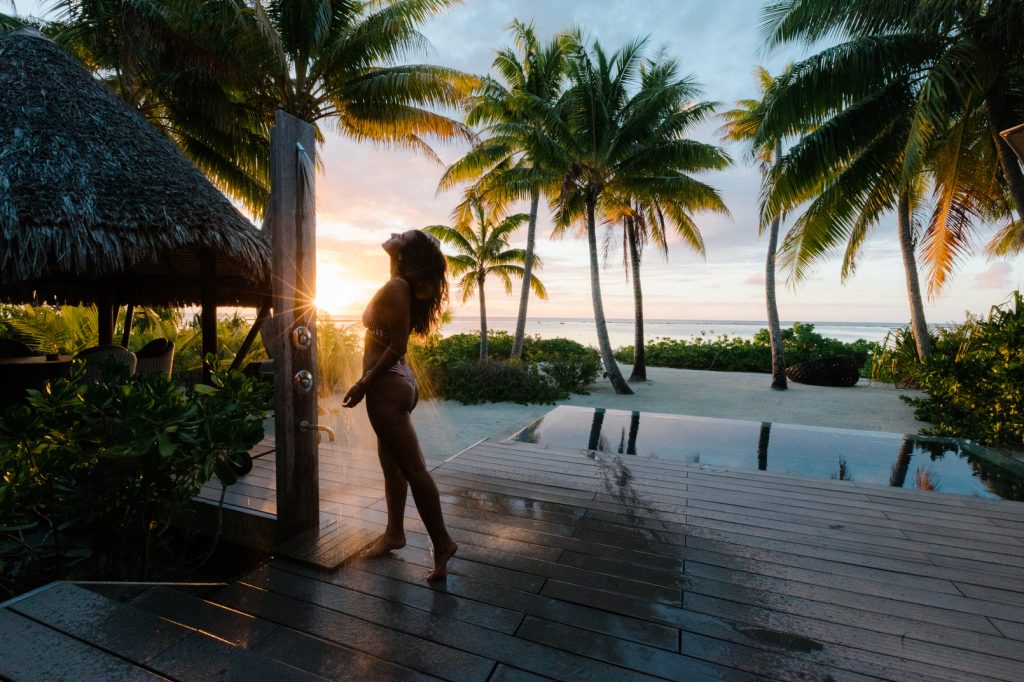 I personally think there should be a many page article written strictly on The Brando alone, as they are a business like no other that is literally revolutionizing what it means to be a world-class luxury resort with an extremely minimal eco-footprint.

Located on a private island owned by the Marlin Brando Foundation, they boast an impressive and unbelievably beautiful property on a small section of the island (the majority of the island is protected nature, at the request of the Marlin Brando Foundation) where each villa comes with its own infinity pool and private beach; although I should mention that the pools and backs of the villas are a safe distance from the beach, as the resort wanted to make the beach a priority and safe place for the turtles when they come to nest during mating season. Silvio Bion, general manager of The Brando, said when making plans to open the resort, they put the environment first with luxury following closely behind, but it was integral to their business plan that sustainability and the environment would not come at the expense of luxury. 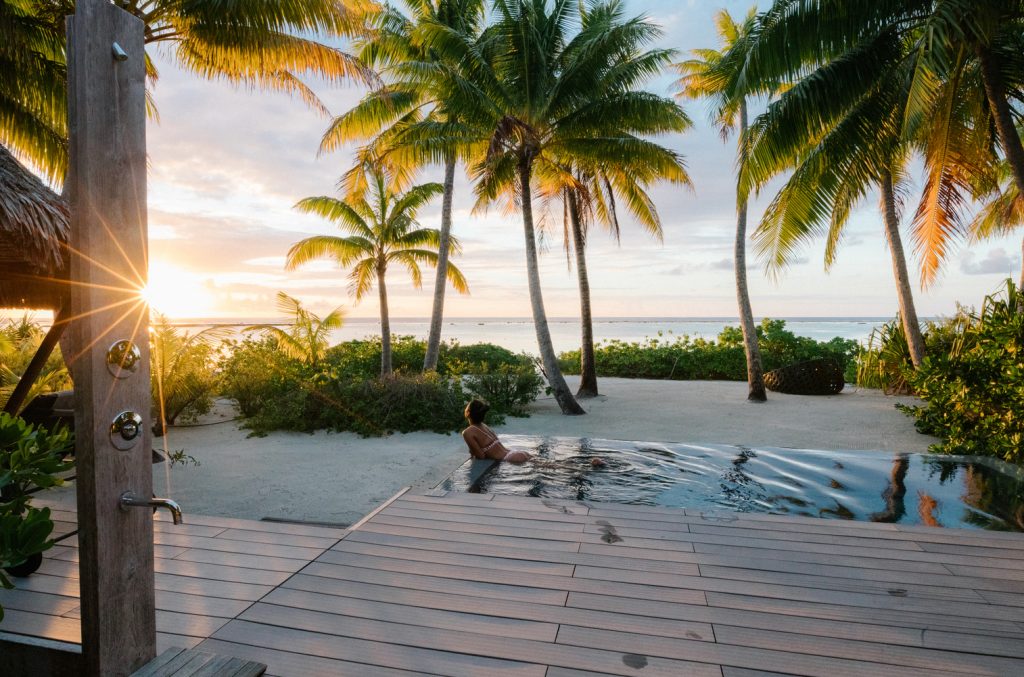 With history of hosting celebrities like Leonardo DiCaprio, Lady Gaga, Barrack Obama, and many more – I think it’s fair to say that they managed to achieve the top tier of extravagance all while keeping it a world-renowned eco-friendly property. For starters, they gift each of their guests a reusable water bottle in each villa, and have no plastic straws on the island, eradicating the single biggest plastic problem at most resorts and hotels. 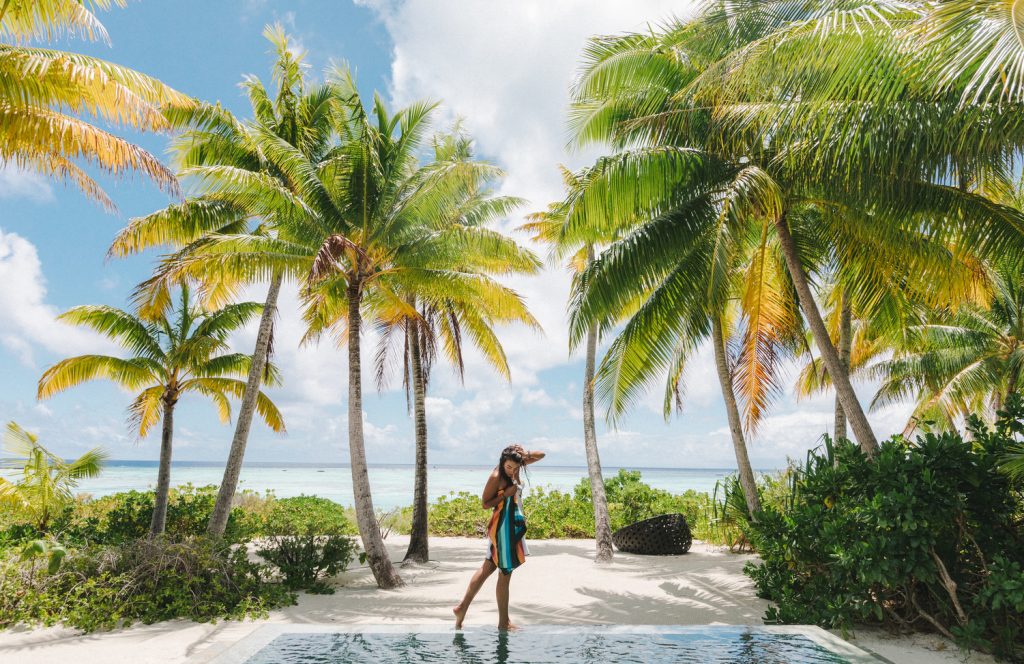 The Brando uses a Salt Water Air Conditioning system that allows them to use cold salt water to power their air conditioning machines in each structure.

They also have technology where they are able to purify salt water into drinkable water.

They also have solar energy structures that collect the sun’s energy to heat the water.

They grow all of their produce in a large garden on the property using rich soil from a machine that turns all the resort’s food waste into compost dirt.

They have 2.5 million of the happiest bees in 64 hives on the island that keep the garden thriving.

They have 14 different recycling stations and crush glass to make it into sand for the island.

They have 4600 solar panels that power two thirds of the island’s energy.

I could honestly keep going, but hopefully you get the point. Which is: you can have it ALL (the hot Instagram pics, the beautiful private villa, the world-class dining, the infinity pool, an outdoor bathtub, a spa that compares to no other in the world) AND be saving the planet in just one vacation.

We know we did.