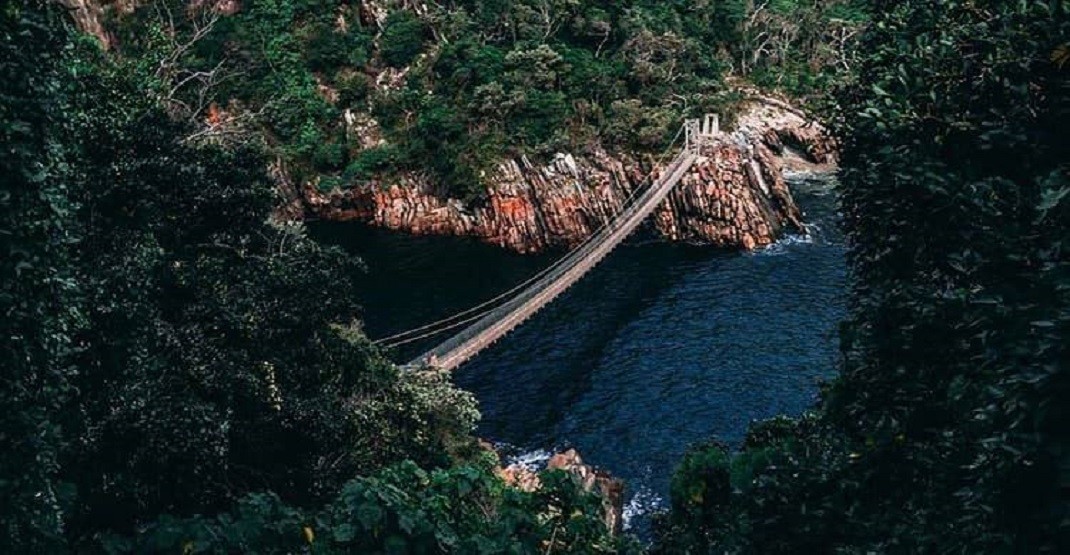 This article was written by Kristine Mitchell, who enjoys exercising her dual passports by slowly but surely making her way around the world. Currently based in Berlin, but constantly planning her next adventure.

When it comes to natural beauty, South Africa has it coming out the wazoo. Think deserted beaches, remarkable wildlife, ancient rainforests, rugged coastlines, mountain views, colourful lagoons… we could go on and on.  If you’re thinking of taking a trip down to SA and want to see something different from the usual urban sprawl, you should definitely consider a trip along the Garden Route.

With jaw-dropping scenery and about one hundred and one outdoor activities, the Garden Route offers adventurous travellers the road trip of a lifetime. Known for being one of the most beautiful stretches of road in the country, it remains fairly wild and quiet (depending on what season you plan to visit). The entire trip should take at least a week or longer if you want to extend your stay in each spot, and you can take it on by renting a car in Cape Town (which is safe and quite affordable).

After a recent trip cruising down here, we’ve put together a list of some of the most stunning checkpoints en route, beginning in Cape Town and ending up in Port Elizabeth. But in reality, every kilometre of this path offers something unique and world-class.

Less discussed but still something important to note: in South Africa there remains quite apparent wealth disparity, which you will encounter along the way. There is a definite juxtaposition between the shanty-towns scattered next to sprawling seaside mansions. Although these striking differences do exist, it should in no way discourage you from exploring this amazing country. Rather, it is something to keep in mind and should encourage you to do some research into the socioeconomic and political situation of the country so that you can be a well informed and open-minded visitor.

Of course, you’re going to want to begin your adventure in Cape Town. The Mother City has such a vibrant scene and simply overflows with things to see and do. Lucky for you, we have compiled a travel guide to Cape Town to help you make the most of your time here!

Not only is this chosen as the starting point of your trip due to its bustling cityscape, but in practical terms Cape Town is super well connected, with an international airport that allows you to easily zip in and out. It also has many cheap car rental options available for after your arrival.

Cape Town makes the perfect base to land and prepare for your adventure.

First up, you’re not going to want to miss this small harbour town. Mossel Bay has over 60 km of golden beaches, is an archaeological hotspot, and boasts many other cultural and natural attractions. Wander down to the Cape St. Blaize Cave or Pinnacle Point where you can see evidence of some of the earliest hunter-gatherer tribes.

You can also check out one of the unique sites in this town known the Post Office Tree. The story goes that a Portuguese sailor sought refuge in Mossel Bay after losing his fleet to a storm. He left his tale of disaster in a boot hanging from a milkwood tree. This boot then served as a post office for decades afterwards; now the tree is believed to be around 800 years old and was declared a National Monument.

And of course, don’t forget to try the mussels here (rated as some of the finest in the world)!

A post shared by Wilderness South Africa (@wildernessgardenroute) on Oct 28, 2017 at 1:17am PDT

The name hints at what you’re bound to find in this gorgeous seaside town. Known for its long, white sandy beaches and lagoons, Wilderness rests on the point where the Touw River meets the ocean.

Consider renting a kayak from town and taking a tour upstream. Along the way you can park the kayak, and hike through the Wilderness National Park to experience a brilliant waterfall or two on the Giant Kingfisher Trail.

Take a swim in the fresh water and experience nature up close and personal in Wilderness.

I have one word for you: ostriches. Oudtshoorn is known to be the ostrich capital of the world. Aside from this, it is also home to Africa’s largest cave system, is an ecological hotspot where three different plant biomes converge, and is well connected to the dramatic Swartberg mountain range.

Known for its artsy and LGBQT friendly-vibe, it has twice been voted ‘South Africa’s Number One Favourite Town’ and for good reason! A short list of the activities you can do here include: mountain biking, forest hiking, scuba diving, beach relaxing, township touring, bird watching and elephant greeting.

Check out Knysna for an epic adventure.

Dramatic coastal scenery, world-class ocean reefs, lush forest and delicate Fynbos (indigenous plants), this hiking and water sports paradise has it all. The Tsitsikamma National Park is a protected area and coastal reserve. It is composed of a mosaic of eco-systems — ocean to mountain, beach to rugged cliff lines.

The main accommodation options can be found at Storms River Mouth, which is also where the famous Otter Trail begins. This five day hike meanders through Tsitsikamma and has comfortable huts to sleep in posted along the way.

For the adrenaline junkies among us, nearby the park is Bloukrans Bridge, from which dangles the world’s highest bridge bungee jump.

Ride a wave in this world-famous surf town. International surfers from all over the world flock to this right-hand surf break, transforming this town into a laid-back hippie hangout.  Known for its seashells, seafood and sea bums, this stop on your trek will surely fulfil your Vitamin Sea cravings.

While in J-bay, take a surf lesson or watch from the beach as the dolphins leap in the swell. By prepared for some epic sunsets and sunrises. Flocked by nature reserves, the little town also has great bird-watching and hiking routes, for when you need to take a break from the waves.

A perfect place to end your journey, Port Elizabeth (PE for short) is a city with great beaches and access to wildlife parks, and is overflowing with artwork celebrating South African culture and history. Famous for Route 67, an art covered path celebrating Nelson Mandela’s freedom fight, the city is also strewn with murals and is home to a variety of institutions that support this creative movement.

It was also named the ‘Bottlenose Dolphin Capital of the World’ in 2016, so if by some chance you missed out on a dolphin sighting on your epic road trip thus far, hopefully here you will finally catch a pic of these playful animals.

With some great bars and amazing eateries, this big city has its own personality and a great underground contemporary culture, making it the perfect place to wrap up your road trip. 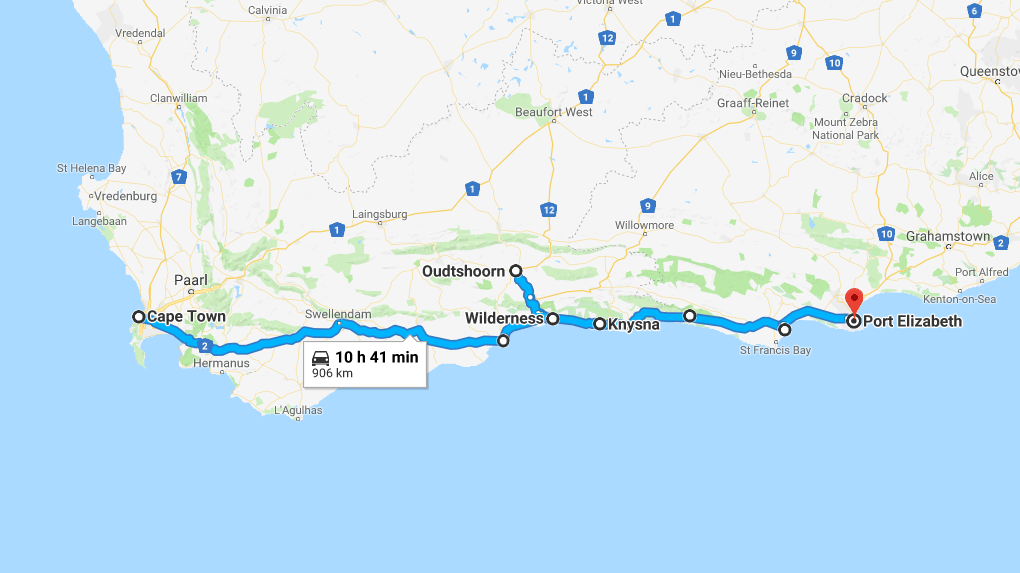