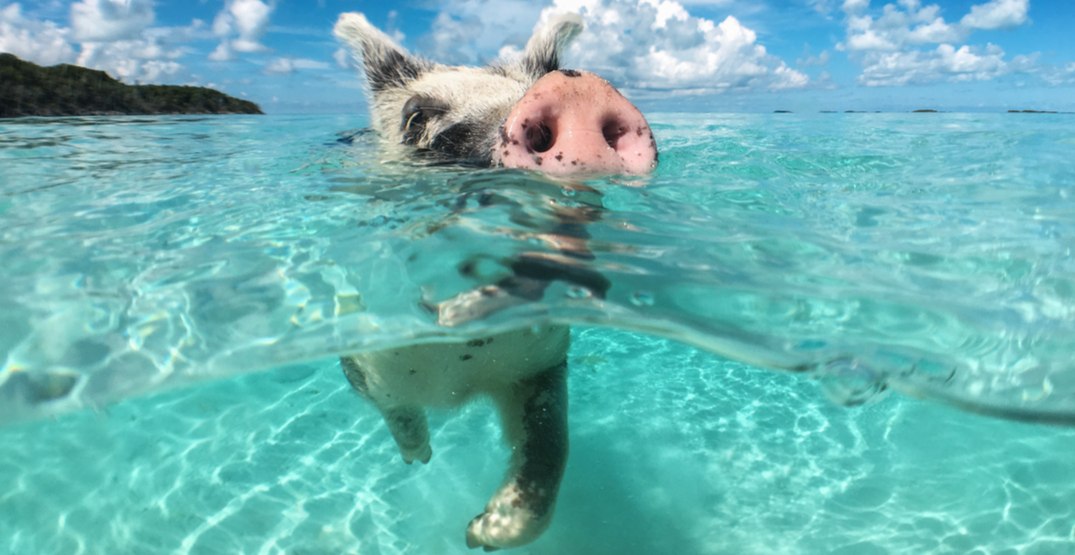 Pig swimming in the Bahamas. (Shutterstock)

me on the first date pic.twitter.com/I7X6p1oHeS

A view of the luxury food court with some luxury school bus transportation at Fyre Festival. #fyre #fyrefestival pic.twitter.com/XL3PtRw8q0

The first luxury tent we found. I believe the rug was Persian. The people who were assigned the tent showed up and we left. #fyrefestival pic.twitter.com/4nPCx1OzZ0

when i wake up with a hangover and watch last night’s ig story https://t.co/BlveJtEnVD

In case you have been living under a rock since the two documentaries came out (FYRE: The Greatest Festival that Never Happened by Netflix and FYRE FRAUD by Hulu, here’s a quick summary.

The soundtrack of our adolescence, Ja Rule, partnered up with wannabe rich guy/con artist, Billy McFarland, to create what was meant to be the most epic music festival of all time. They created an out-of-this-world promo video using the hottest models and influencers, the picture perfect water of the Bahamas (including its pigs), and other imagery that portrayed the lifestyles of the rich and famous.

The Fyre team was great at selling this dream to the people who spent thousands of dollars on tickets. (We actually do feel bad for them, but if you are dropping $250,000 on a festival, you had this coming).

What they weren’t so great at was delivering on that promise. The festival was a total flop, the festival grounds were in logistical shambles, guests were expected to sleep in hurricane tents and eat cheese and bread sandwiches, and ended up fleeing the island for civilization before Ja Rule could say “It’s Murda.”

The dinner that @fyrefestival promised us was catered by Steven Starr is literally bread, cheese, and salad with dressing. #fyrefestival pic.twitter.com/I8d0UlSNbd

The financial loss experienced by the local people of the Bahamas was devastating, so much so that a GoFundMe page was started for local restaurant owner Maryann Rolle (which has raised $218,000 and counting) as well as the labourers and everyone else that was involved in the Fyre fiasco in the Bahamas (sitting at $30,000).

Because capitalizing on the current viral obsession of Millennials is key to being a good marketer, Shutterstock has stepped up to the plate with an ad that shows how Fyre Festival’s extravagant promo video could have been made with a fraction of the cost and time, using stock images.

Shutterstock’s video promises much of the same as Fyre Festival’s promo — models, beautiful beaches, and pigs — but as it’s just in the form of stock footage, they are actually going to deliver on their promise!