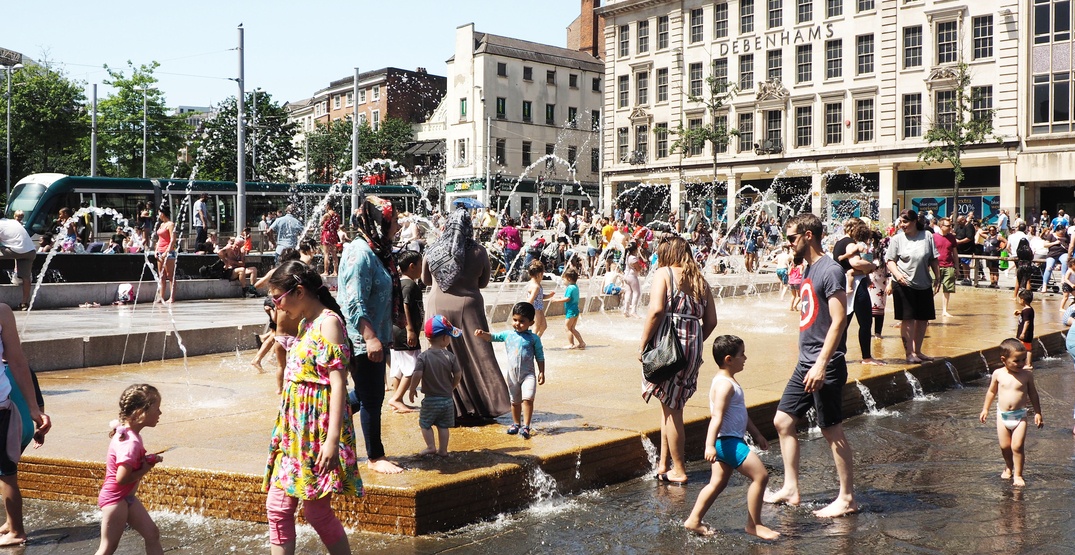 People cool off in Market Square, Nottingham during the heatwave. (Darren Green/ Shutterstock)

An intense heatwave is blanketing much of Europe as heat records have been broken in France, Germany, the Netherlands, and the UK this week.

According to the World Meteorological Organization (WMO), Paris set a new temperature record of 42.6 °C on Thursday, smashing the previous record of 40°C set in July 1947.

#Paris reached a new temperature record of 42.6 °C at 1632 and the temperature might increase further, says @meteofrance pic.twitter.com/rIslJtxQy6

Twenty-five weather stations in the country recorded temperatures over 40 °C.

A day which will make #weather history, says @dwd_presse. #Germany set a new national temperature record (provisional figure) of 42.6°C in Lingen, defeating the old record by 2.3 °C. There were 25 weather stations above 40 °C #heatwave pic.twitter.com/euV1KmEuc3

While the UK is experiencing slightly lower temperatures, the sweltering heat has broken its July temperature record with a temperature of 36.9 °C at Heathrow in London.

The WMO predicts that the all-time UK record of 38.5°C may also be broken in the coming days.

The heat has been so intense in the UK that trains needed to be slowed in case rails buckle due the extreme temperatures, causing major delays.

The UK has broken its July temperature record with a temperature of 36.9 °C at Heathrow, London. @metoffice
says the all-time UK record of 38.5 °C may be broken #heatwave pic.twitter.com/fXx7u86VGB

In the Netherlands, temperatures reached above 40 °C for the first time in history, as a high was 41.7°C  was recorded in Deelen.

With files from Kellie Paxian.