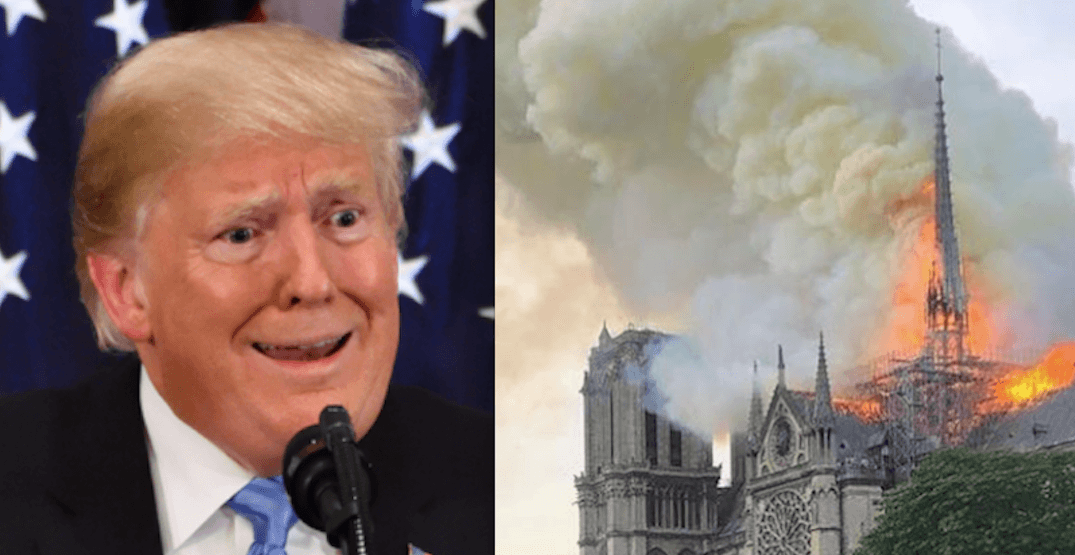 It was a scene that shocked and saddened onlookers at the scene, as well as viewers around the world on Monday morning: The world-famous, history-filled Notre Dame Cathedral in Paris, France, on fire.

The Notre Dame Cathedral marks the heart of the city for locals and tourists alike, and is the most visited monument in Paris. The cathedral sees 12 million visitors a year — nearly double the people who visit the Eiffel Tower.

Paris’ mayor Anne Hidalgo called it a “terrible fire” and asked locals to respect the security perimeters around the scene.

And upon seeing broadcasted images of the blaze, US President Donald Trump had his own, uh, advice for how to handle the situation, including – but not limited to – “flying water tankers.”

So horrible to watch the massive fire at Notre Dame Cathedral in Paris. Perhaps flying water tankers could be used to put it out. Must act quickly!

Now, in case you haven’t been following along, the Notre Dame Cathedral is an 850-year-old structure, so it goes without saying that dumping gallons and gallons of water on it directly from above all at once may not actually be the best idea.

So when Trump chimed in with his suggestion, firefighters in Paris were quick to respond to his idea.

Hundreds of firemen of the Paris Fire Brigade are doing everything they can to bring the terrible #NotreDame fire under control. All means are being used, except for water-bombing aircrafts which, if used, could lead to the collapse of the entire structure of the cathedral.

Yes, the collapse of the entire structure. So yeah, maybe hold off on the “flying water tankers” for now.