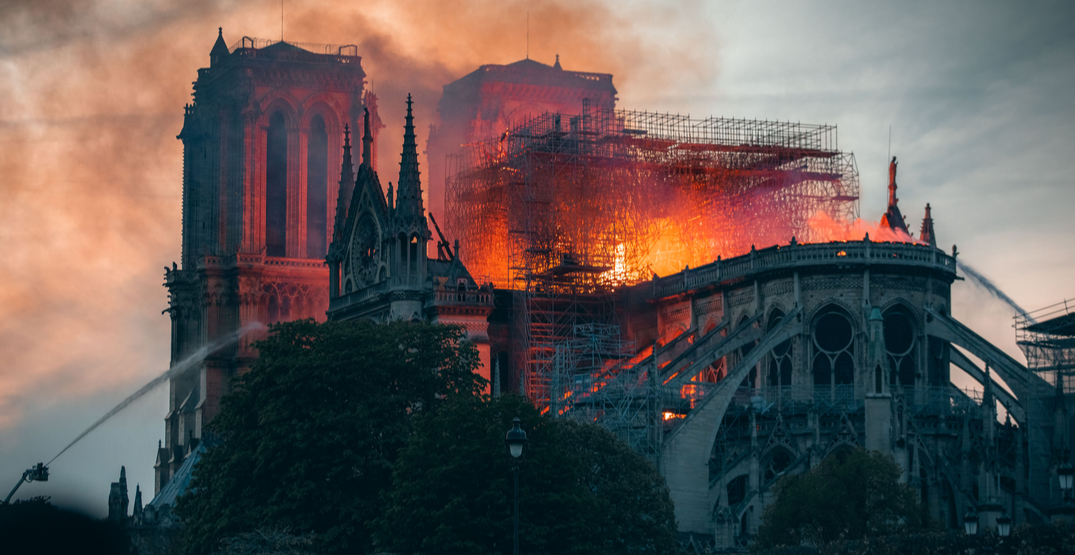 Today, April 15, 2020, marks the one-year anniversary that one of Paris’ most iconic landmarks was tragically engulfed in flames.

On April 15, 2019, a fire broke out at the Notre-Dame Cathedral, a sight that broke the hearts not only of French residents and citizens but of people all around the world who appreciated its rich, historical beauty.

All anyone could do was look on in horror as fire overwhelmed the cathedral, causing the spire to crumble to the ground and the ceiling to cave in as flames swept through its classic interior.

Images emerged across the Internet of the devastation that plagued the beloved structure.

In what is considered a saving grace, the main structure remained preserved, and French President Emmanuel Macron vowed to rebuild what was destroyed and laid out a five-year goal for the reconstruction to be completed.

Unfortunately, due to the ongoing COVID-19 pandemic and France’s countrywide lockdown, restoration of Notre-Dame has been put on hold.

In a video statement — delivered in French — issued today, Macron extended his gratitude to those who saved it and continue to work on its restoration.

“Let’s not forget anything of the heroic outburst of courage that saved the cathedral nor the tremendous wave of generosity that arose in the hours and days that followed,” the president stated.

“Of course the site is in pending at the moment due to the health crisis,” he explained.

“But it will restart as soon as possible.”

Macron concluded his address with a message of hope that the French people will be able to gather together once again.

To mark the one-year anniversary of this tragic event and a hope for its future, the cathedral’s bell was rung to commemorate the occasion.

As well, many users took to social media to share their memories of visits to and time spent at the beautiful Parisian monument.

One year ago today I remember watching in horror as this beautiful and iconic building was damaged. Thinking of the people of Paris and France on the first anniversary of the fire at Notre Dame Cathedral ❤ #Paris #NotreDameCathedral pic.twitter.com/jd4RaZn65C