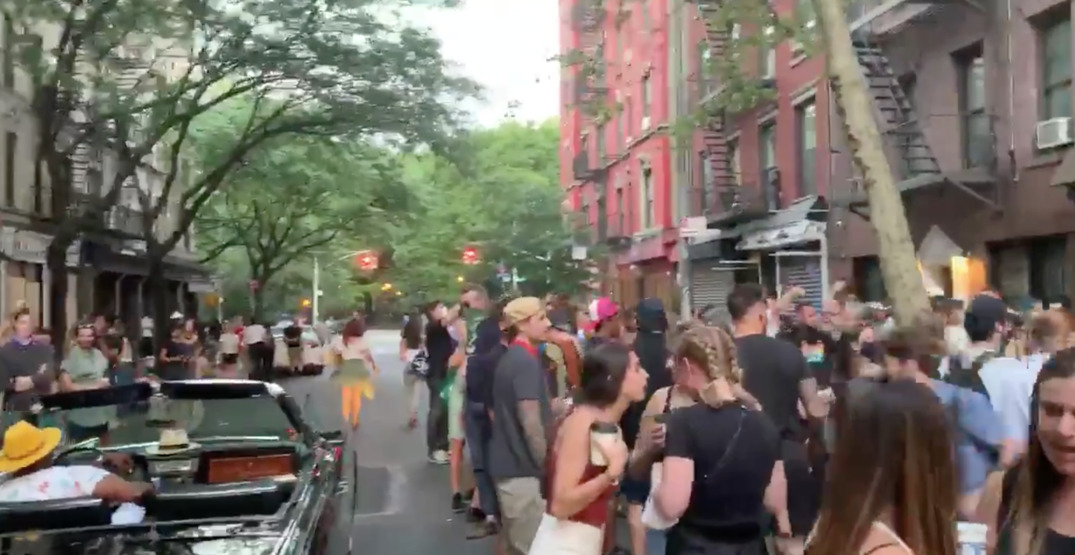 New York Governor Andrew Cuomo is cracking down on those who have been violating physical distancing measures and gathering in large crowds.

In a press conference on Sunday, Cuomo reminded bar and restaurant owners that violations of the state’s reopening policies and guidelines could result in the loss of their liquor licence. He also emphasized the vital responsibility of members of the public to wear facial coverings and appropriately distancing from one another to hinder transmission of COVID-19.

Cuomo stated that he and his government have received 25,000 complaints regarding large gatherings at businesses violating the state’s guidelines. He continued that they have never received more complaints in such a short time.

“What’s alarming about the 25,000 is the volume, but it also shows how smart people are and how offended people are that they’re calling and complaining,” he explained. “They’re afraid for themselves. They walk past the business. They see the businesses violating the rules, and they are saying my health is jeopardized — my health — and that’s why they’re complaining.”

We have received 25,000 complaints of reopening violations.

Bars or restaurants that violate the law can lose their liquor license.

People with open containers in the street can be fined.

Police & protesters not wearing masks can be fined.

Local gov’t must enforce the law.

A majority of the complaints concerned people gathering at bars and restaurants and not following the health and safety measures instituted by the state, which Cuomo described as not only violating the law but also being immoral, unethical, and all-around bad New Yorkers.

Moving forward, businesses that are found to not be in compliance with the strict guidelines set in place will have their liquor licence revoked, which can be detrimental for a bar or restaurant. Inspectors from the State Liquor Authority (SLA) have also been dispensed to investigate these facilities.

“We are not kidding around with this. You’re talking about jeopardizing people’s lives.” Cuomo stated. “It’s a legal violation, and the SLA inspectors are out there.”

Governor Cuomo continued that, if this behaviour continues, he will reverse the reopening plans for areas that are not obeying the rules.

“I am warning today, in a nice way, consequences of your actions,” he stated. “We have 25,000 complaints statewide. I’m not going to turn a blind eye to that. New Yorkers deserve better.”

A video of St. Mark’s Place in New York’s East Village popped up on Friday, June 12, and prompted Cuomo to issue a tweet simply stating, “Don’t make me come down there.” A large number of people can be seen not distancing or wearing appropriate facial coverings.

Don’t make me come down there… https://t.co/OeVGMW7LEO

New York has also experienced a number of protests regarding police brutality brought on by the killing of George Floyd, drawing in large crowds. Cuomo was quick to clarify that although he respects the right to protest, the law still applies and all participants must distance and wear masks.

“Protesters and police, the law applies to you.”