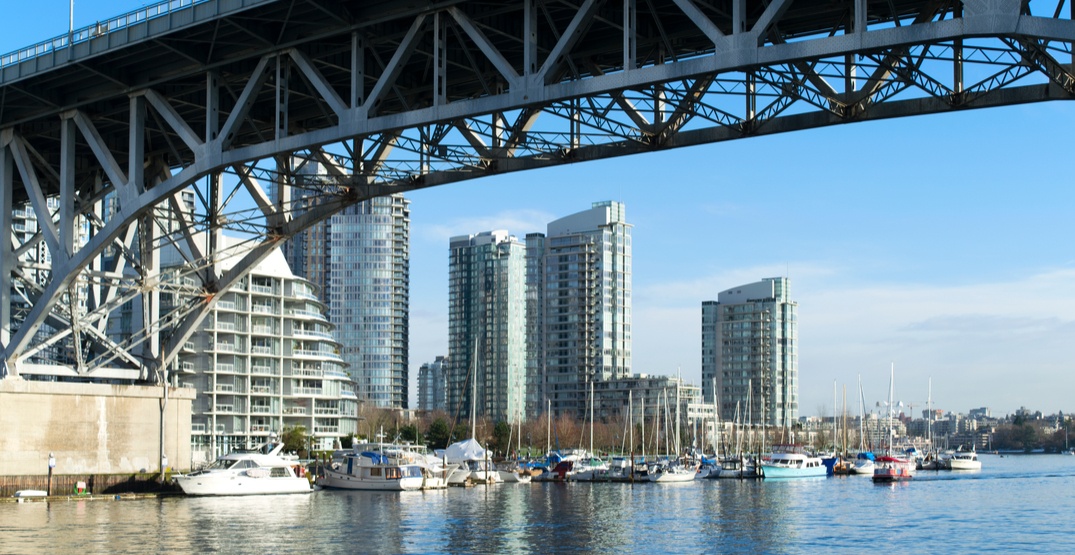 Yes, Vancouver is geographically stunning thanks to its snow-capped peaks and the Pacific Ocean lapping its shores. The sights are all beautifully reflected in the towering glass skyline.

However, where the city gets its personality is in its many diverse neighbourhoods. Vancouver is very accessible and whether you’re taking it on by foot, bike, or transit, you will be able to cover a lot of ground and see all the different sides that make it unique.

Whether you’re a hipster-and-you-know-it, socialite (or wannabe socialite), beach bum, yogi, or nudist beach bum, we’re here to point you to your people.

Without further ado… presenting our neighbourhood guide to Vancouver! 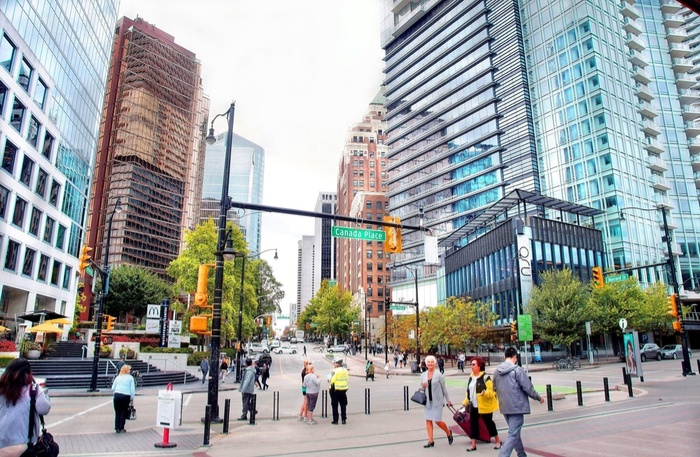 Vancouver’s business and retail core is where the action happens and is extremely walkable. Here is where you can navigate the sidewalks packed with people in suits (and yoga wear, because well, Vancouver) while admiring the shiny glass architecture.

Downtown Vancity is home to the retail hubs of Robson Street, Pacific Centre, and Nordstrom. Business is bustling in skyscrapers such as the Bentall Centre and Telus Garden, and tourists and locals are aplenty at the Canada Place cruise ship terminal and grass-roofed Convention Centre.  Don’t forget Vancouver’s OG party street with the nightclubs locals love to hate (and always end up at the end of the night) – the Granville Street strip.

As in most cities, downtown Vancouver is a great place to kick off your tour of the city and get the lay of the land. 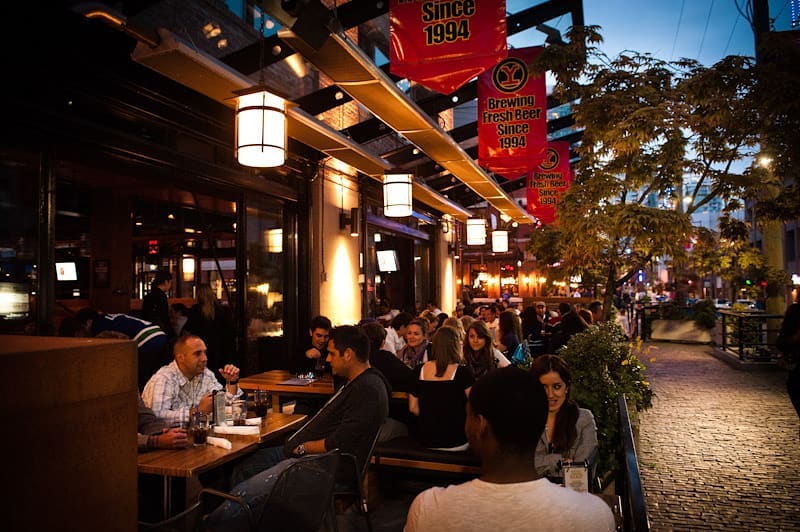 Let us paint a picture of Yaletown. Imagine fit, beautiful people walking their French bulldog on a leash as it pees on the artificial grass, partygoers dressed to the nines and teetering down the cobblestone sidewalks in stilettos, all the self-care businesses you’ll ever need, from fitness to botox to spas, and a plethora of upscale (read: expensive) grocery stores.

Okay, we love to stereotype, but we live here too and are damn proud of it.

The area is mainly comprised of two bumpin’ restaurant and bar streets, Hamilton and Mainland, the surrounding modern condo buildings, and the shiny waterfront marina. Don’t fact-check us, but one of those yachts at the marina might be ours. 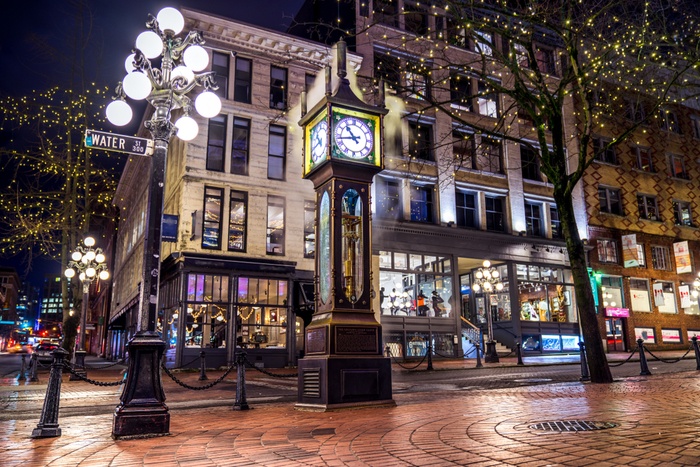 Lamp-lit cobblestone streets, charming sidewalk terraces, and heritage architecture lend a dose of European charm to this area of town. Situated adjacent to downtown, Gastown often sees a lot of tourists coming off the cruise ships or seaplanes and has the tacky souvenir shops to prove it.

Walk along Water Street (Vancouver’s first street) to find points of interest like the Woodwards building, Gassy Jack, the steam clock, Waterfront Station, and Hotel Europe (Vancouver’s mini answer to NYC’s Flatiron Building). Gastown is definitely an area you need to check out. 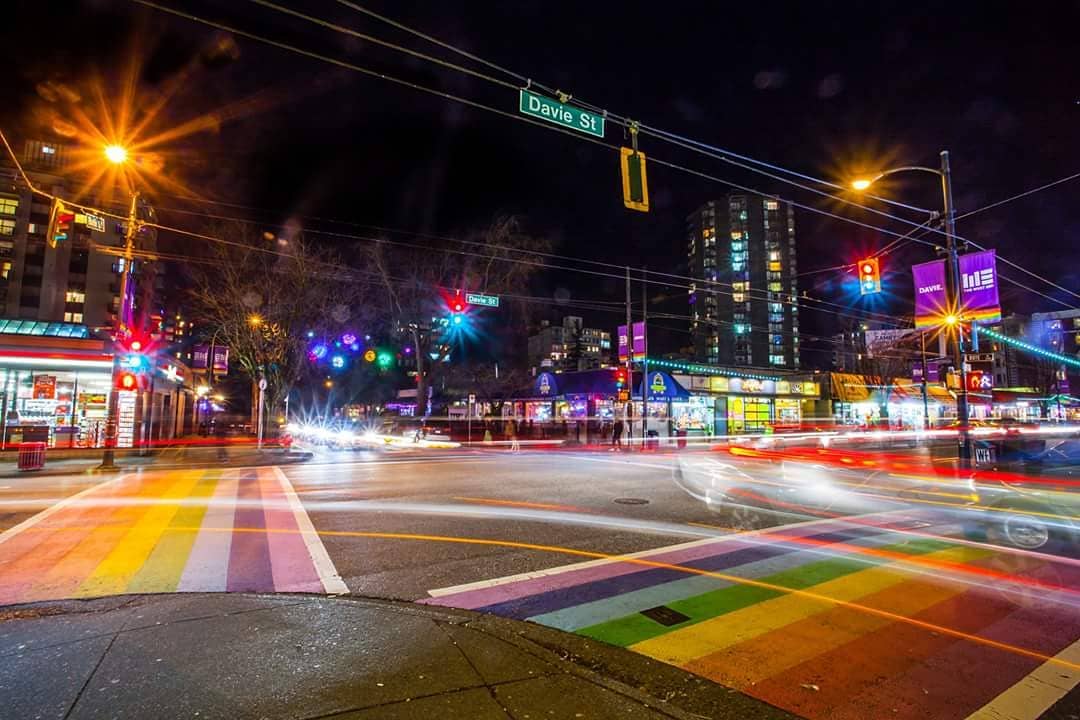 This area is the proud, rainbow-clad home of Vancouver’s LGBTQ community. Davie Street is the spot you’ll want to go for eats, drinks, and dancing with the city’s most vivacious queens. The area is capped off by the stunning English Bay, one of Vancouver’s prime sundowner viewpoints, where you’ll find a large stretch of beach dotted with logs for lounging (and where you most definitely will notice some hilarious laughing statues nearby).

The West End particularly shines during the annual Pride Festival or the Celebration of Lights fireworks displays, where the entire city and then some flock to the beach. However, its views make it worthy of a visit no matter what the season. 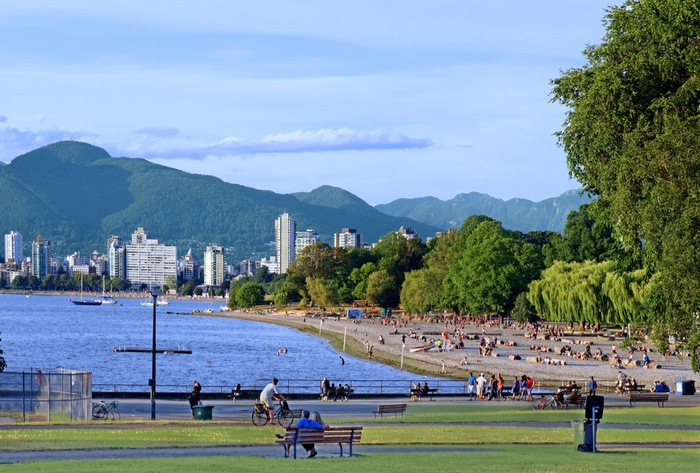 While we’re on the topic of beaches, views and prime sunset locations, allow us to introduce you to the neighbourhood of Kitsilano, or “Kits” for short. It’s been said that this beach attracts some of the best-looking people in the city/country/world (are we biased?). This could be something to do with the major #fitfam scene here. And yes, those people are doing acro yoga on the grass. It’s fine. It’s normal. We’re good.

Not only is Kits home to the first-ever lululemon store on the retail street, West 4th – meaning the local Whole Foods is filled with babes in activewear – but it is the perfect area in the city to grab a green juice, bike along the seawall, play some beach volleyball, and then head off to your yoga class.

Once you’re done being all active, park yourself at the Local patio for a Caesar or beer. It’s basically a right of passage for Vancouverites. 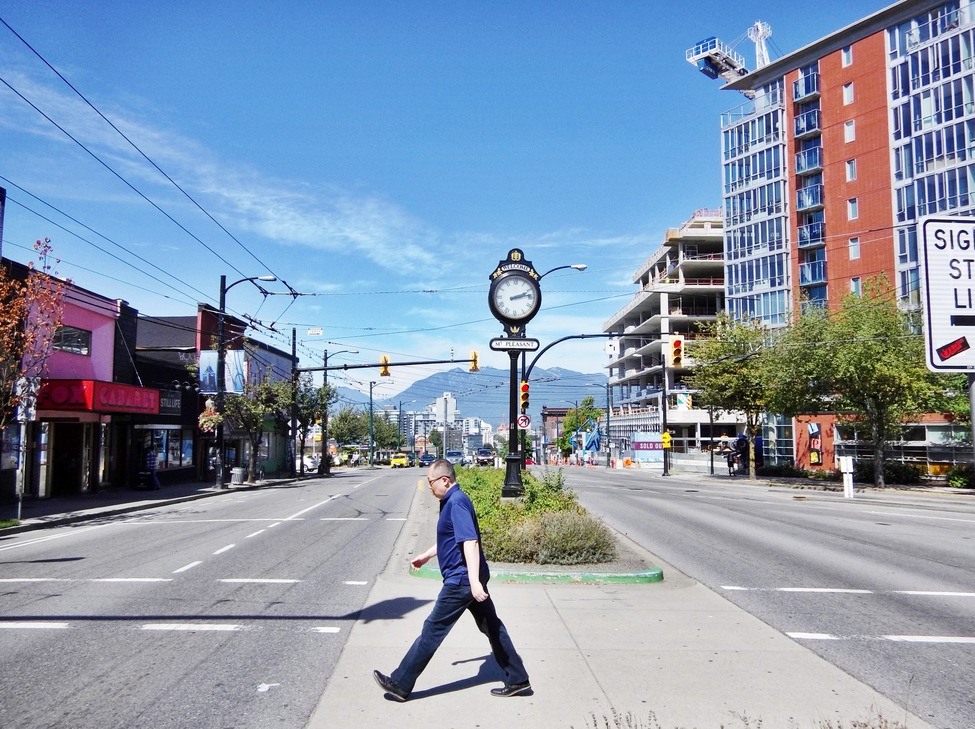 You’ll know you’ve hit East Van when you notice the chill hipster vibes, colourful murals, and breweries on every corner. Must-visit hubs are Main Street in Mount Pleasant and Commercial Drive (dubbed as “The Drive” by locals). Both are comin’ in hot as the trendiest and most desirable areas of the city for young people to live and hang out, as gentrification swallows some of East Vancouver’s 90s grunge and replaces it with indie shops, cafes and other spectacular hipster fanfare.

Here is where you can find more affordable real estate (that is, relative to downtown), mom-and-pop shops, tech companies, all the artisanal food options, skateboard shops, and craft breweries galore. Home of the Vancouver Mural Festival, Mount Pleasant caters to all forms of artistic expression.

Like every other area on the brink of downtown, it’s rapidly growing so don’t be surprised if it looks a bit different every time you come back. 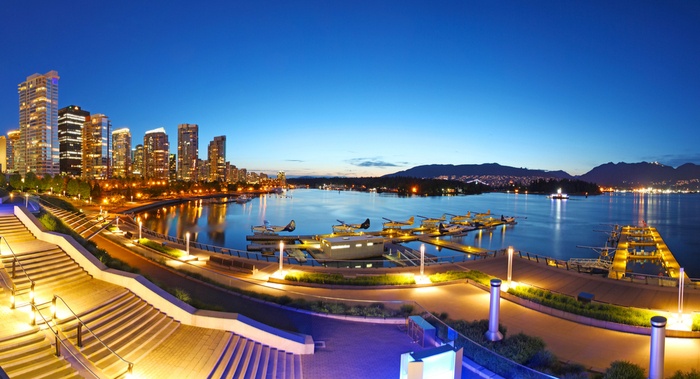 Situated on the seawall and capped off by Stanley Park, there is a calm, peaceful, fresh vibe to this neighbourhood. These high rises boast some of the city’s most expensive, most lavish real estate – and, rightfully so. A lovely place for a stroll with a cup of gelato or a bike ride – and keep an eye out for seals in the marina!

This is also another place where we may have parked our yacht. Can’t remember. DM us if you find it. 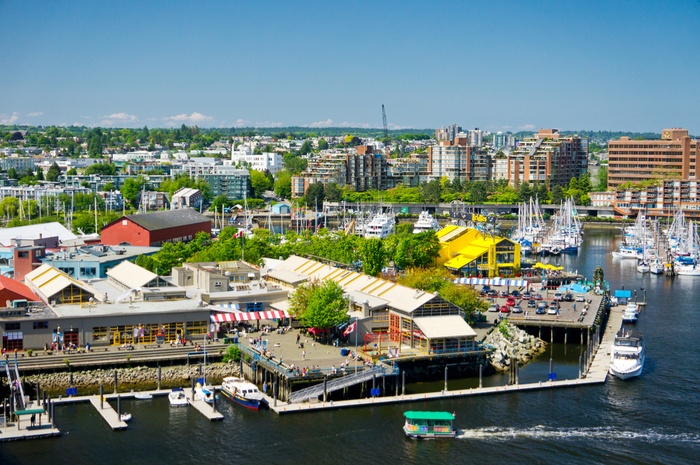 Right across the bridge from the downtown core, continue down Granville Street to (what some people are trying to call) “SoGo,” for chic boutiques, art galleries, and all the home decor stores you ever dreamed of. A major attraction is Granville Island, an art hub under the bridge that offers a large fresh food market, various restaurants, cute shops and galleries on Railspur Alley and in Net Loft, and plenty of space for strolling and soaking in the marina-side views. If you want seafood in Vancouver, you come to Granville Island. 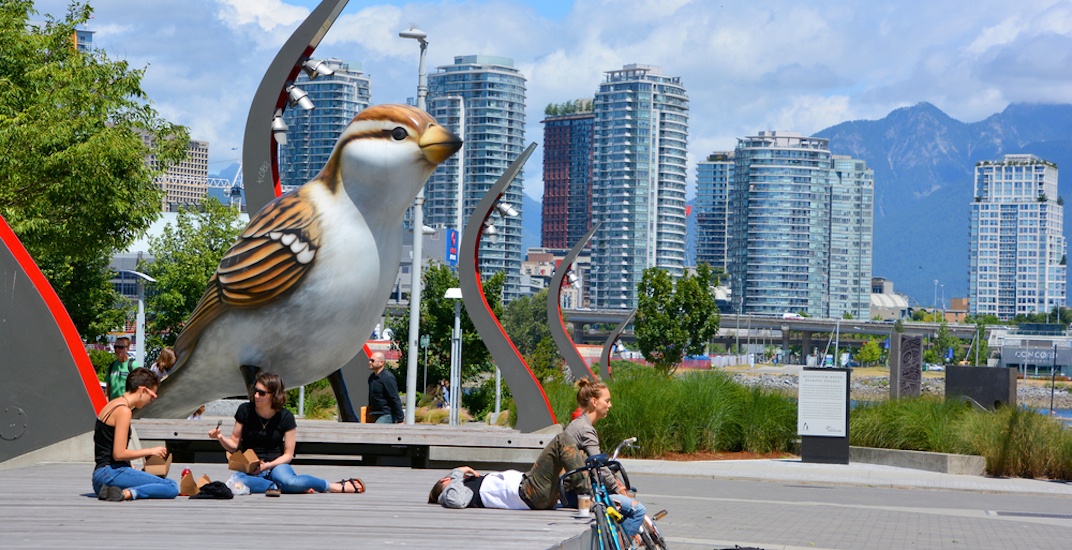 Originally created as the athletes’ homes for the 2010 Winter Olympics, this area consists of complexes of shiny condo builds, spacious seawall grounds with plenty of room for people-watching, and some fab drinking establishments. It’s a newer and increasingly desirable area of town with awesome views of Science World, BC Place, and Rogers Arena. Home of the annual Dragon Boat Festival, it’s also a great place to take the small Aqua Bus across False Creek. 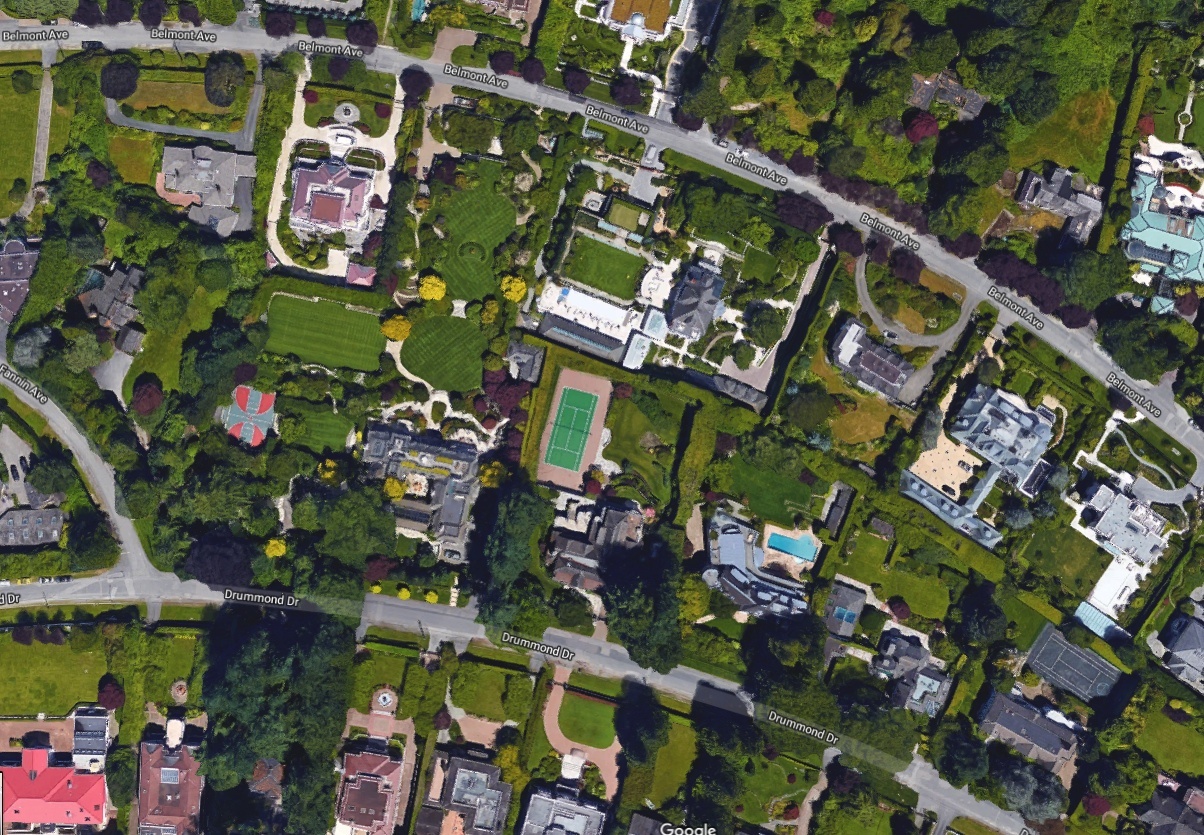 We’ve been saving our pennies and we still can’t afford to live in Point Grey, but we do enjoy sneaking a peek at its drool-worthy oceanview properties. This is home to some of Vancouver’s more chill and spacious beaches, Spanish Banks and Jericho Beach – perfect for beach volleyball, a picnic on the grass, or just epic views of the downtown skyline.

Keep on driving and you will pass by Pacific Spirit Regional Park; a little further and you’re in the impressive grounds of the University of British Columbia, and even further and down an aggressive amount of steps for North America’s largest nude beach, Wreck Beach. Sun’s out, buns out, are we right or are we right?! (We’re right.) 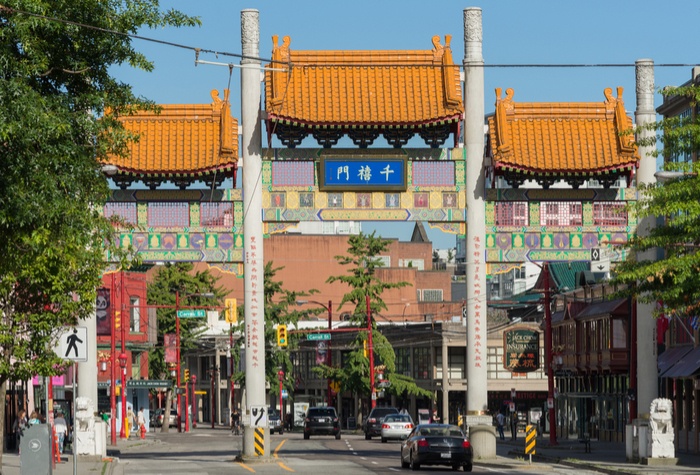 Chinatown is a staple in major cities all across the world, and Vancouver is certainly no exception. This is where you can find the most delectable dim sum, hip coffee and tea shops and bars, and indie shops. Get your goods at T&T Supermarket and stroll through the tranquil grounds of Dr. Sun Yat-Sen Classical Chinese Garden if you want to really get your Chinese fix. 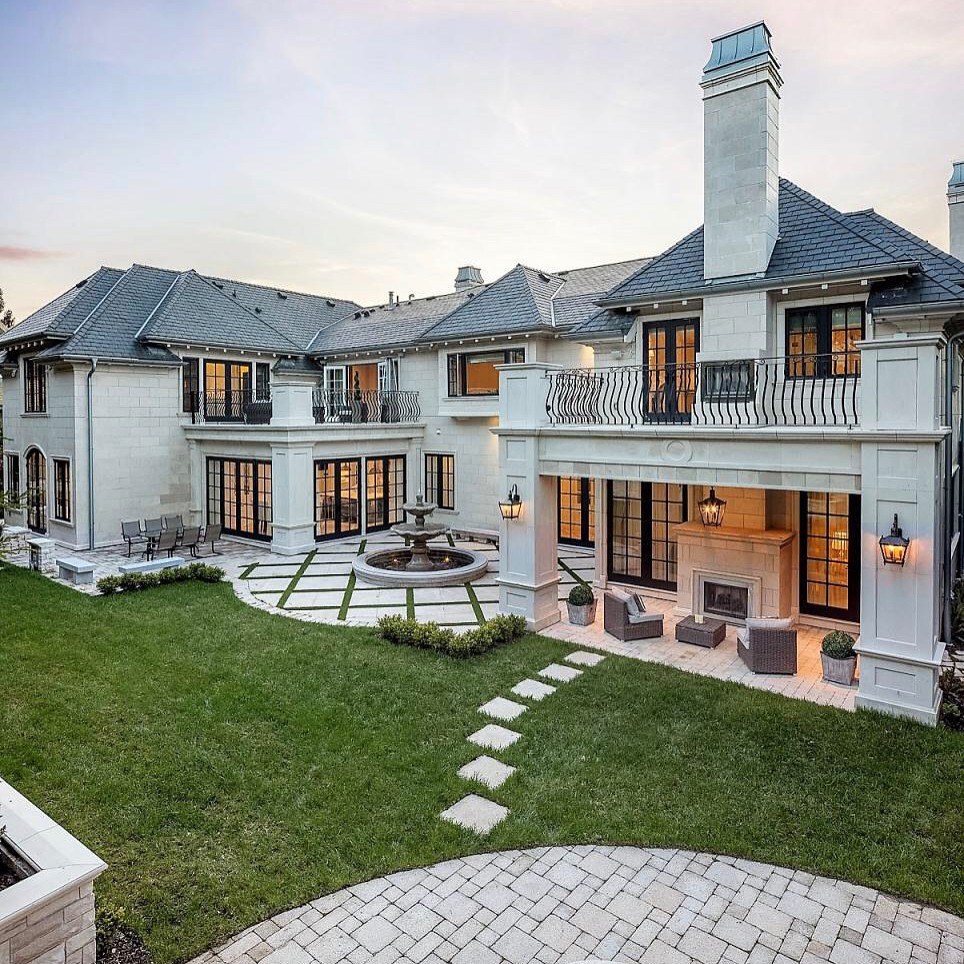 Heading south from the downtown core, Arbutus Ridge, Kerrisdale, and Shaughnessy are largely residential areas with, well, large residential homes. This is where you will find a lot of the dream properties in Vancouver, the ones us locals love to joke about never being able to own! (In case that wasn’t clear, Vancouverites’ favourite topic is our expensive real estate.)

The demo is a bit older here but you can absolutely seek out some great hidden gems for coffee, eating or boozing – especially in Kerrisdale Village along 41st Avenue. 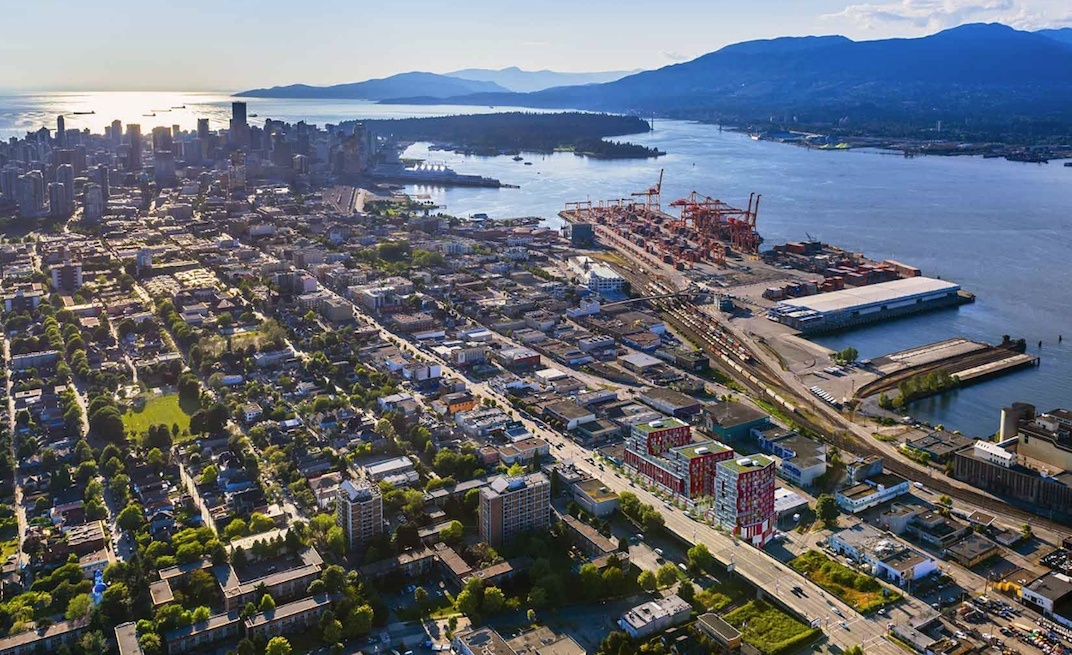 The other side to the opulent neighbourhoods above are the ‘hoods of Strathcona and Hastings Sunrise. Here, you can still live in a detached home, but it is a little more accessible due to a bit of extra grit on these streets. You may come across some questionable characters in this area, but everyone still maintains that classic Vancouverite politeness. With trendy warehouse businesses, distilleries and breweries, all the cool kids hang out in Strathcona.

That’s a wrap on the top neighbourhoods to check out in Vancouver; now it’s time to get out there and explore! Share your snaps using the hashtag #dailyhivemapped.