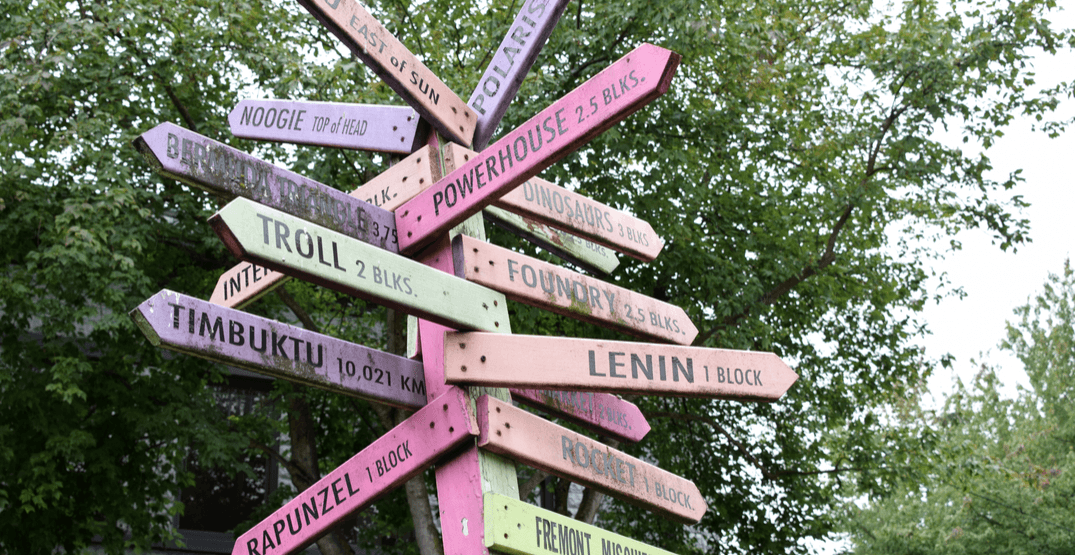 Seattle is a city that rewards patience and discovery. It won’t hit you in the face with a custom song about how great it is like New York City, and it won’t dazzle you with glitzy beaches and glitzier people like Los Angeles. What it can offer you is a city that will open itself up, layer by layer.

Under the constant watch of Mount Rainier, an active stratovolcano that puts anything in Vancouver to shame, Seattle’s neighbourhoods each have their own distinct style, personality, and boundaries.

So to help you feel like a local ASAP and do your best to overcome the Seattle Freeze (it’s a thing), we’ve compiled the basics about each of the city’s major areas. So grab a cup of coffee (it’s all good here), hop on a bike, and get ready to explore Seattle! 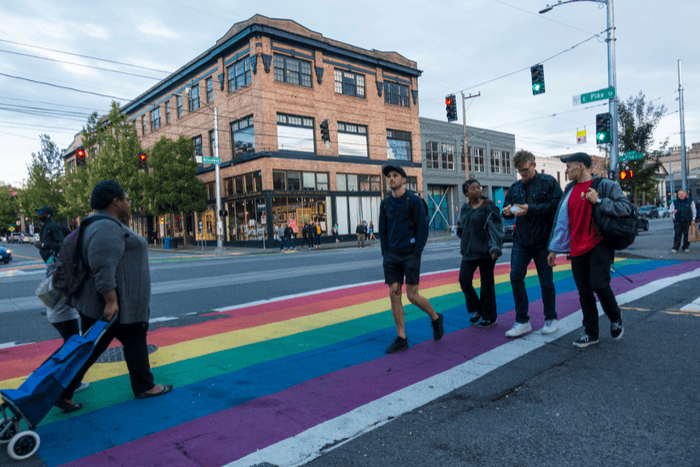 The Hill is an amazing place to start your visit to Seattle. From locally-owned restaurants and boutique shops to the excellent Volunteer Park (perfect for a solo date with a book and a coffee), the neighbourhood was almost built for lowkey brunch hangouts.

Start your day at Analog Coffee, go grab a book (or a cat??) from Twice Sold Tales, and swing by Uncle Ike’s Pot Shop for something we are not legally allowed to suggest. And make sure to check out the rainbow-coloured crosswalks. 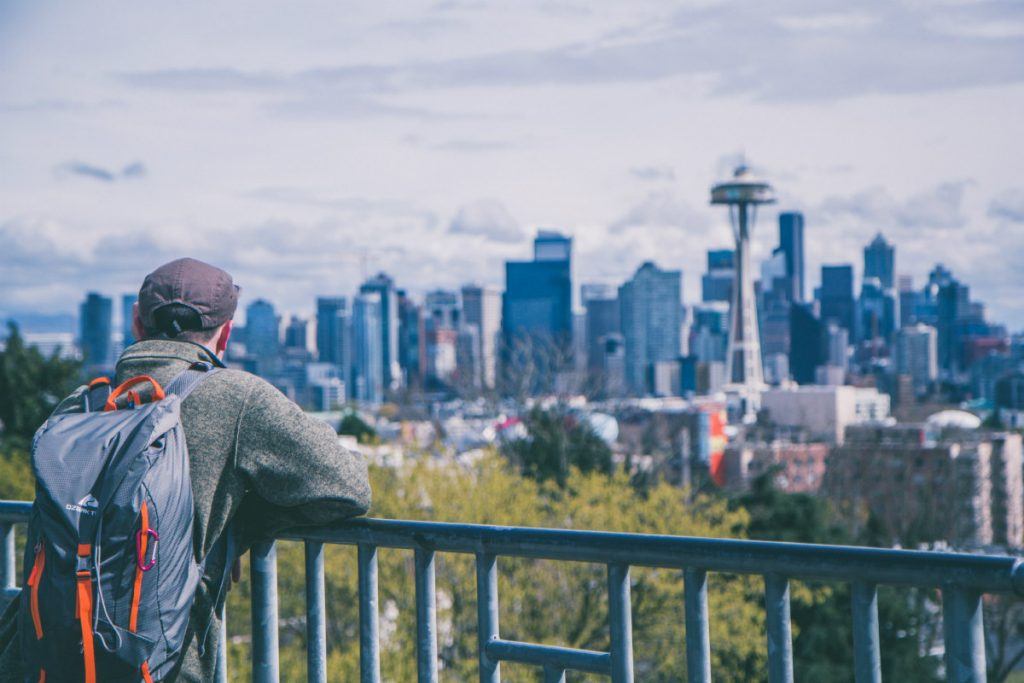 Looking from Queen Anne to Lower Queen Anne and the Space Needle. (Unsplash)

All of Seattle slopes downhill towards downtown and the pier, but on the opposite end of the sea level spectrum sits Queen Anne, at the top of the city’s hills. So for starters, don’t visit the neighbourhood by bike unless you have legs (and lungs) of steel. For everyone else, you’ll find some of the city’s most laid-back and exclusive shops. (Check out the Parsons Gardens, you won’t regret it.)

Meanwhile, in lower Queen Anne, you can find the city’s iconic Space Needle, some awesome craft breweries, and truly unique EMP Museum of pop culture. Make a day of casually browsing these neighbourhoods and you won’t be let down. 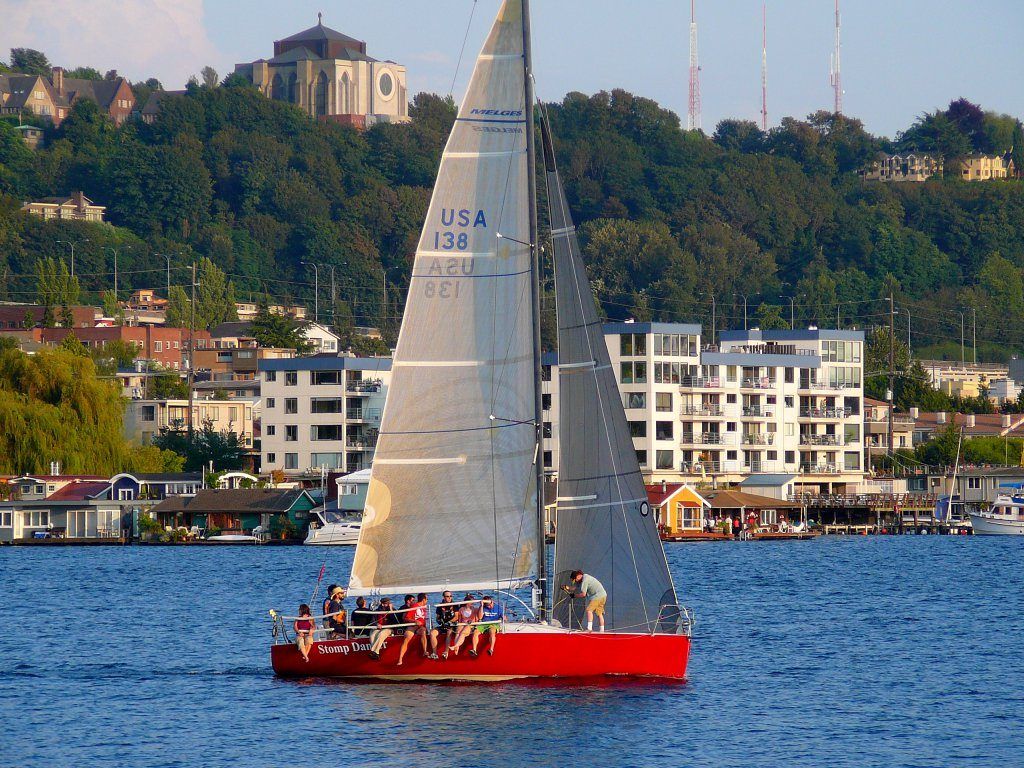 This is where Seattle’s tech side comes to play, with warehouses and industrial fixtures quickly making way for trendy bars and the other spoils of gentrification. However, there are plenty of smaller and intimate spaces for those who want to avoid the rush. So whether you want to rub elbows with Amazon programmers or share a meal with some friends, you’ll find something to suit your needs here.

Browse the food stalls at Assembly Hall until you find something that matches your appetite, enjoy a stein at Feierabend, and end your (surprisingly late) night with a slice or two at A Pizza Mart. Now you’re partying like a tech bro! 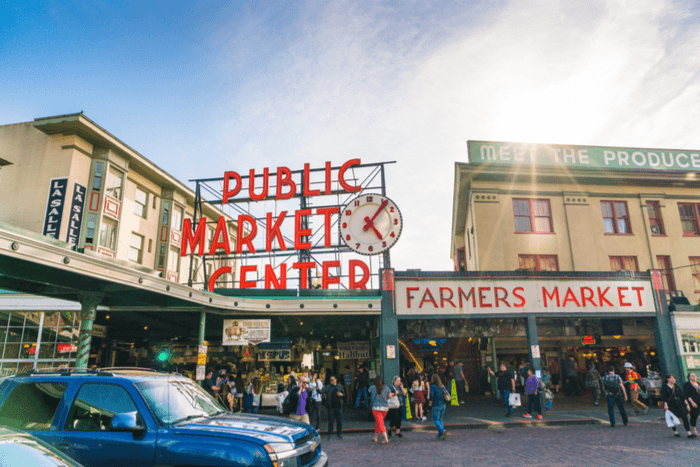 Some of Seattle’s biggest landmarks can be found here, from the first-ever Starbucks store, to the legendary Pike Place Market. Throw in a trip to the Seattle Aquarium (Octopus!!!) and a drink at Rachel’s Ginger Beer, and you have a full day. But then it’s time to go off the beaten path.

Check out the Gum Wall (it’s exactly what it sounds like), swing by Radiator Whiskey, and dig around Post Alley for The White Horse to prove you’re not just another tourist (and have an amazing time as well). 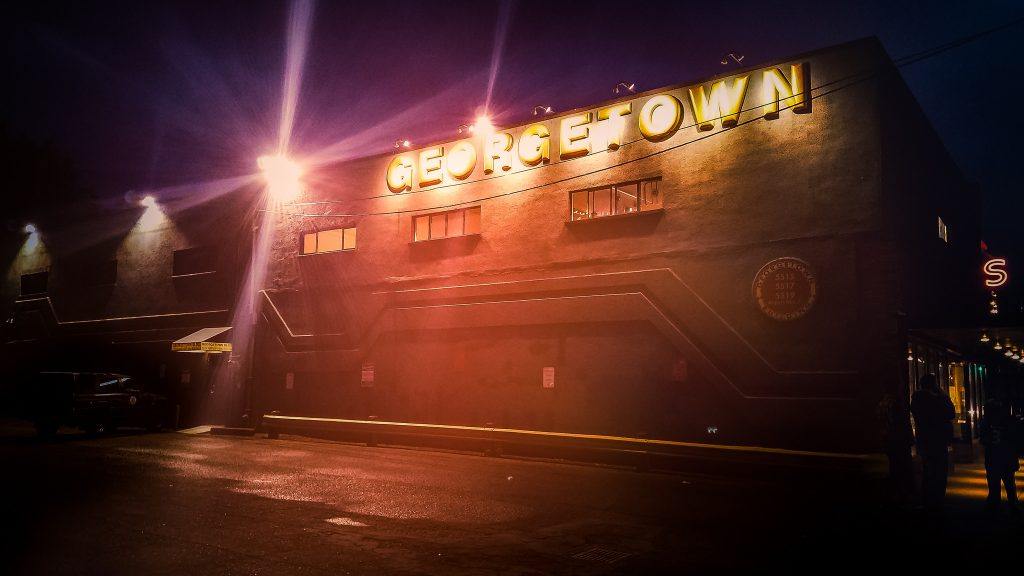 If you want to experience old-world Seattle, this is the place to be. Between antique shops, decades-old restaurants, and more distilleries than your liver could reasonably handle, you’ll be able to walk across abandoned train tracks and through IG-friendly alleyways as you explore the neighbourhood.

Eat Chinese food in an actual train car at the Orient Express Restaurant and Lounge, go straight to the source of one of the biggest graphic novel publishers at Fantagraphics, and enjoy some vegan-friendly beers at the Ghostfish Brewery Taproom before ending your day with a show at the Showbox SoDo. 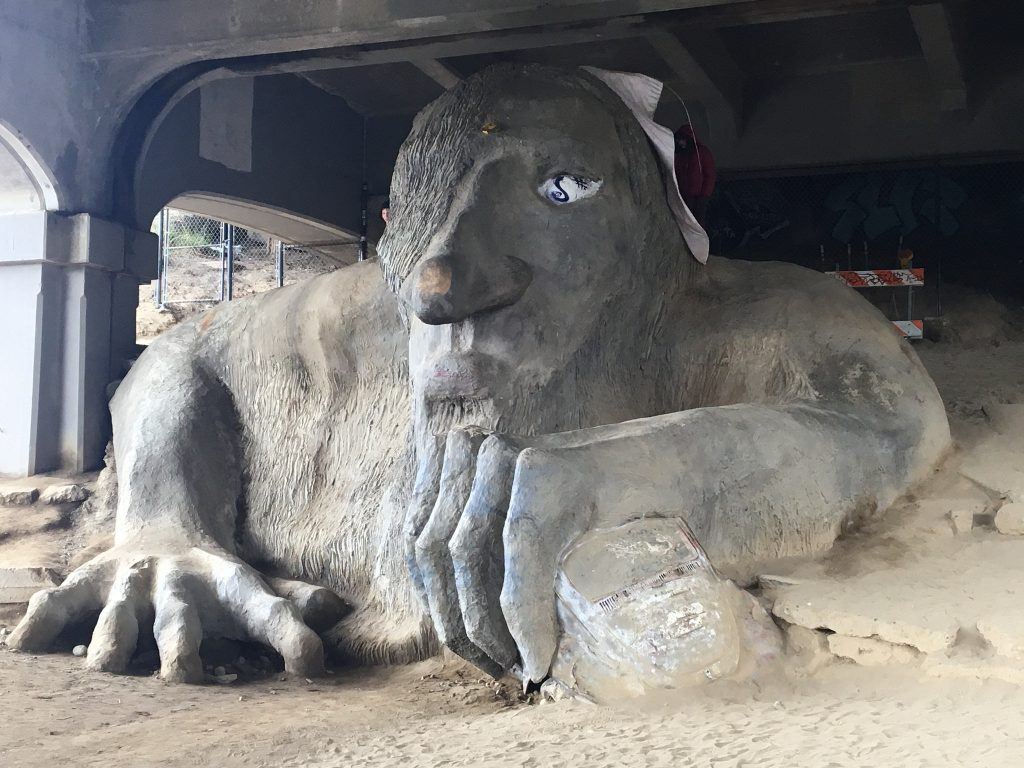 This tiny slice of the city is as hippie-happy as Seattle gets. It’s a great place to experience some truly local food and drinks while taking in some psychedelic sights. You haven’t lived until you’ve spend an afternoon in Gas Works Park, taking in the amazing juxtaposition of nature right beside a decommissioned gas plant.

Once you’ve had your share of sun, head for some delicious Korean food at Joule, snap a picture at the Fremont Troll, and grab a sandwich at Paseo (it’s worth it, trust us) before walking along some of the Burke Gilman Trail to get the best views of the city. 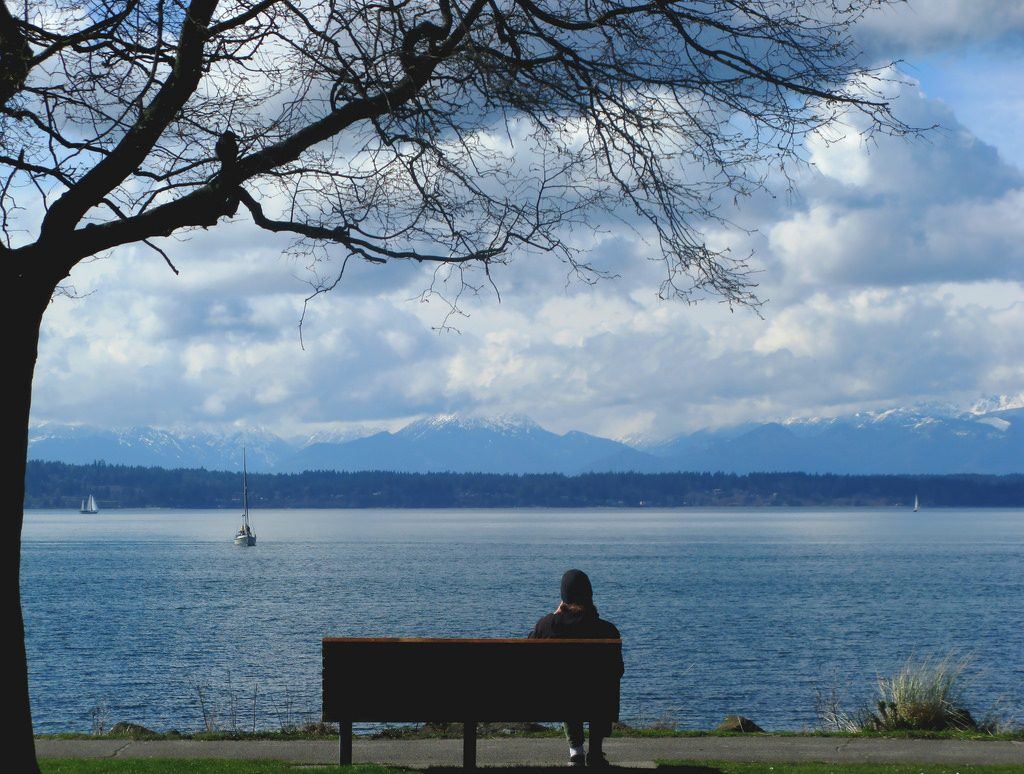 The view at the Golden Gardens is unreal. (Flickr)

This neighbourhood brings the charming vibe of a small seaside fishing village to the big city, and Ballard is proud of its roots. The Sunday Farmers Market is legendary, so bring your own tote and get ready to fight someone for something organic.

If you need to focus on your own wellness journey, make sure to hit up Dandelion Botanical Company for all your sage and incense needs. If you can find a table for brunch at The Fat Hen, your stomach will thank you. And wrap up your day with a trip to Golden Gardens, a park that’s also a beach. Day drinking isn’t just encouraged, it’s practically mandatory. 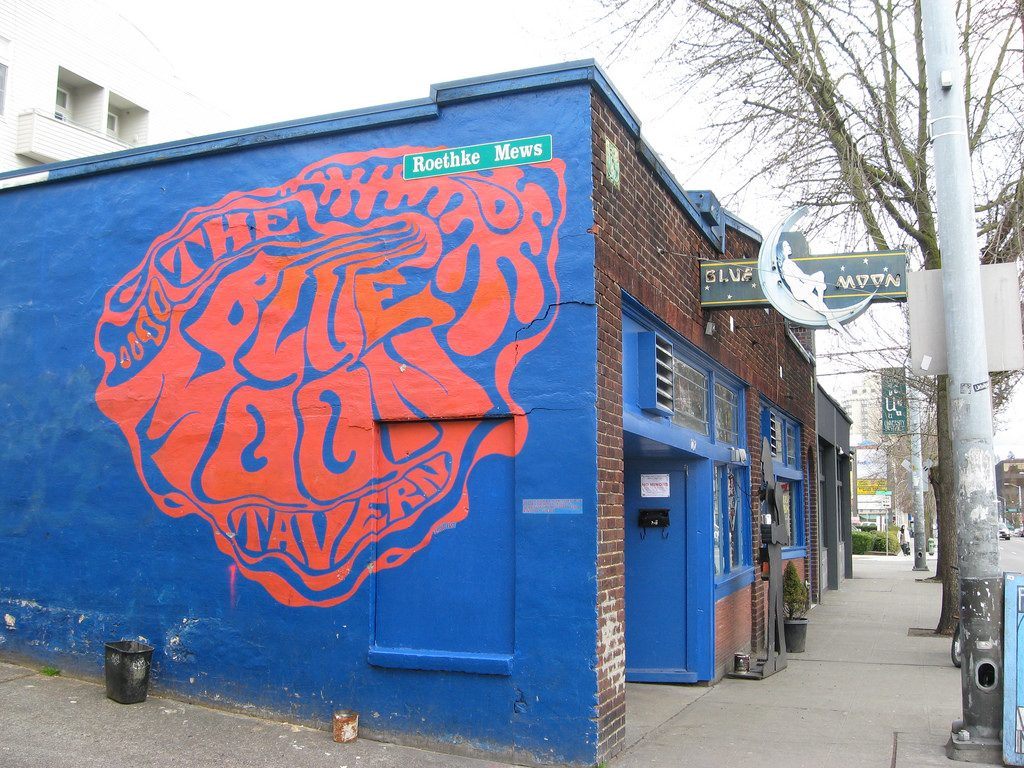 Whether you’re looking to hang out with some students or just drink like one, this is the place for you. The main event is obviously the University of Washington, but unless you’re super into higher education, there’s not much for a tourist to do other than take in the stunning architecture.

If you want to continue treating your eyes, hit up Ravenna Park, and then take in some live music at the Neptune Theatre. You can hit up the legendary Blue Moon Tavern to grab a drink at a legitimate Seattle landmark, or go to The Kraken because it’s a pirate-themed bar. 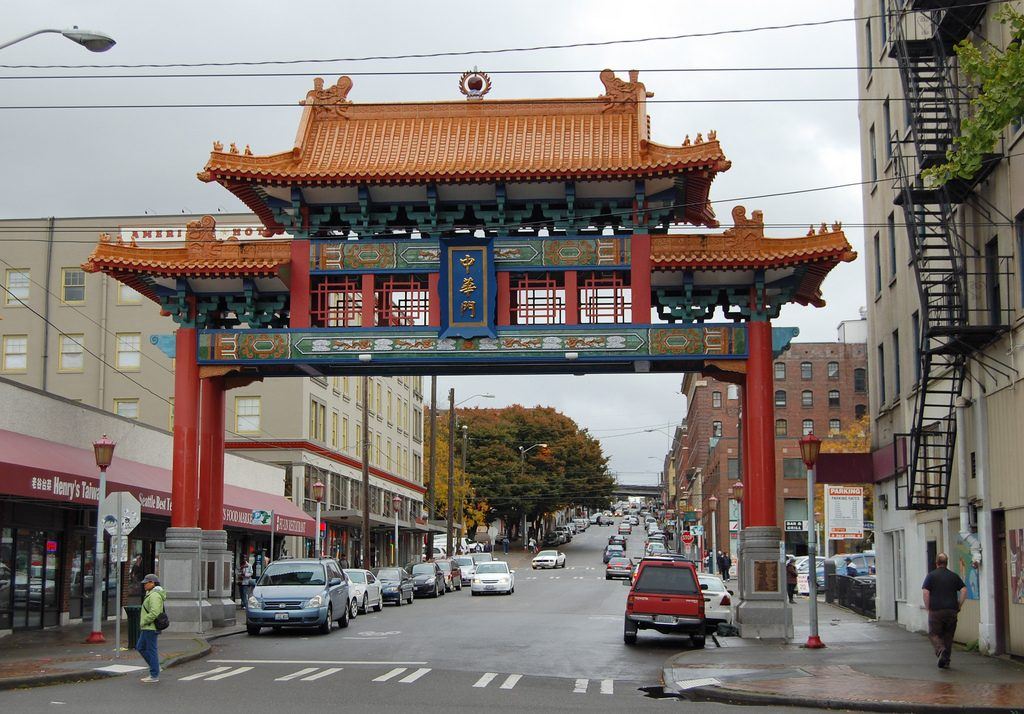 Comprised of Chinatown, Japantown, and Little Saigon, this neighbourhood is as rich with history and culture as it is with amazing places to eat and drink. Perfect for a rainy day, you can start your visit to the ID with a bowl of hot noods at Mike’s Noodle House, and then watch the rain (or the tai chi) at Hing Hay Park.

If you want to change up your activities, make a beeline for the Seattle Pinball Museum to either relive your wasted youth or learn about how people spent their free time before smartphones. Take in some history at the Wing Luke Museum before grabbing some souvenirs from KOBO at Higo for the trip home.

That should give you a good start in Seattle – but as we mentioned, this city is made up of many layers, so we want to see where your favourite place to explore is! Share your snaps using #dailyhivemapped.