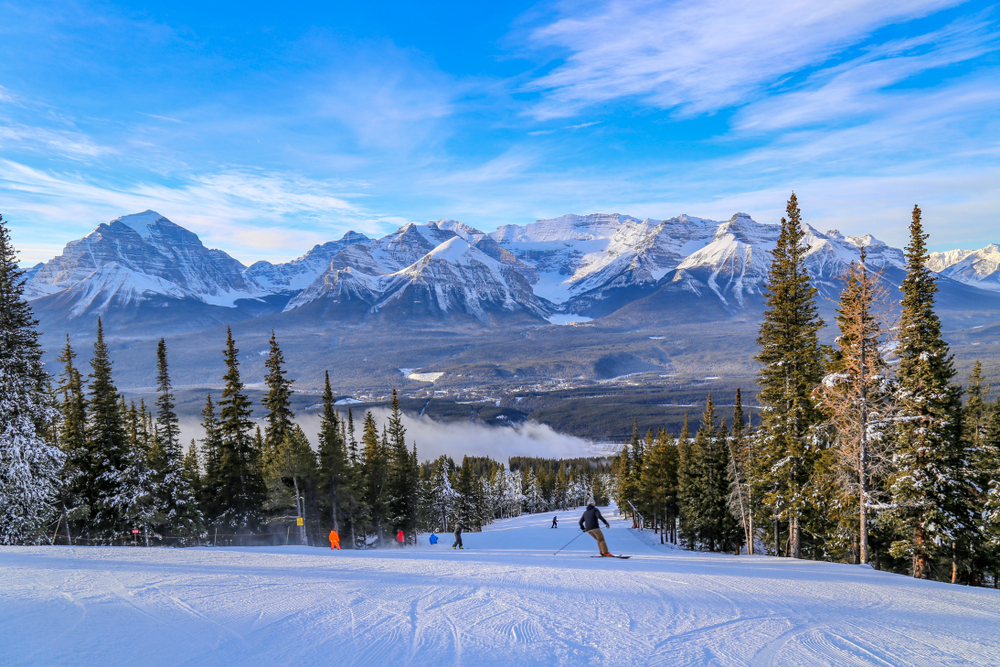 Even though you can’t go to a resort and enjoy a warm-weather escape this winter, that doesn’t mean that you have to stay inside.

During the winter months, many of Canada’s national parks are open to exploration and offer visitors a range of recreational winter activities to enjoy. The trails might be covered in snow, but the parks transform in the winter, offering snowy vistas and icy escapes.

Here are 12 national parks in Canada worth bundling up to enjoy this winter.

Warm up even on the coldest winter days at the hot springs in Kootenay National Park. The park is home to several hot springs that are open to the public, including Radium Hot Springs (the largest hot spring mineral pools in Canada), the mineral-rich Halcyon Hot Springs (overlooking Upper Arrow Lake and the horseshoe-shaped cave lined with stalagmites and stalactites), and Ainsworth Hot Springs (owned by the Yaqan Nukiy people of the Ktunaxa First Nation).

Near Tobermory, Ontario, Bruce Peninsula National Park is known for the dramatic cliffs emerging from Georgian Bay. In the winter, reserve a yurt at the Cyprus Lake Campground or put on your warmest snowsuit to hike three to four hours to reach Stormhaven for backcountry camping.

As a pilot program, Parks Canada and Tourism Cavendish Beach have partnered to groom winter trails for hiking, snowshoeing, and fat bikes. The trail that connects the Cavendish Dunelands to Cavendish Grove is suitable for all hiking levels.

Visitors can ski at Banff Sunshine Village, Lake Louise Ski Resort, and Mt. Norquay in Banff National Park. The resorts have banded together as “SkiBig3” to offer vacation and lift packages allowing you to explore all three mountains during your stay. For the adventurous, several snowcat experiences transporting expert-level skiers to untouched terrain.

In the winter, the fjords and mountains in Gros Morne National Park become a winter paradise for cross-country skiing, snowshoeing, or even an outdoor picnic. For the experienced adventurer, hike into the backcountry or stay overnight in one of the backcountry ski huts.

Located between Quebec City and Montreal, La Mauricie National Park offers 68 km of marked and groomed trails in protected land ideal for cross-country skiing. Warm up while on the trails in one of the heated shelters located every 5km along the trails.

As one of the largest and darkest Dark Sky Preserves in Canada, Grasslands National Park is the perfect spot for stargazing during the long winter evenings. Many of the trails are open during the winter, including the Ecotour Scenic Drive, where you might catch a glimpse of bison or other wildlife.

Explore Kluane National Park and Reserve as soon as the lake freezes over and snow covers the land. On land, you can pick between cross-country skiing, ice fishing, snowshoeing, dog sledding, backcountry camping, and snowmobiling or by air with one flight-seeing tour.

Kouchibouguac National Park transforms in the winter to offer several winter activities, including cross-country skiing, snowshoeing, fat biking, sledding, and bird watching. For those looking to stay over in the park, choose between a rustic shelter in the South Kouchibouguac campground along the cross-country ski trail or backcountry camping at Petit-Large.

During the winter months, visitors can still book oTENTiks in Riding Mountain National Park to glamp in an A-frame cabin at the Wasagaming campground near Clear Lake. Each cabin has sleeping platforms for up to six people, a wood stove, a deck, and a fire pit, but you’ll still want to bring a warm sleeping blanket to keep warm during the adventure.

Even though Wood Buffalo National Park is the largest national park in Canada, there are a few hiking and snowshoeing trails that are short enough for a half-day escape into the wilderness. During the evening, be sure to look up to catch a glimpse of the northern lights dancing in the sky when it gets dark.

The Bay of Fundy isn’t only a popular summer destination; Fundy National Park is open during the winter for cross-country skiing, birding, snowshoeing, tobogganing, and more. Stay over in a yurt, oTENTik, or in a tent to spend a few days immersed in the winter wonderland.