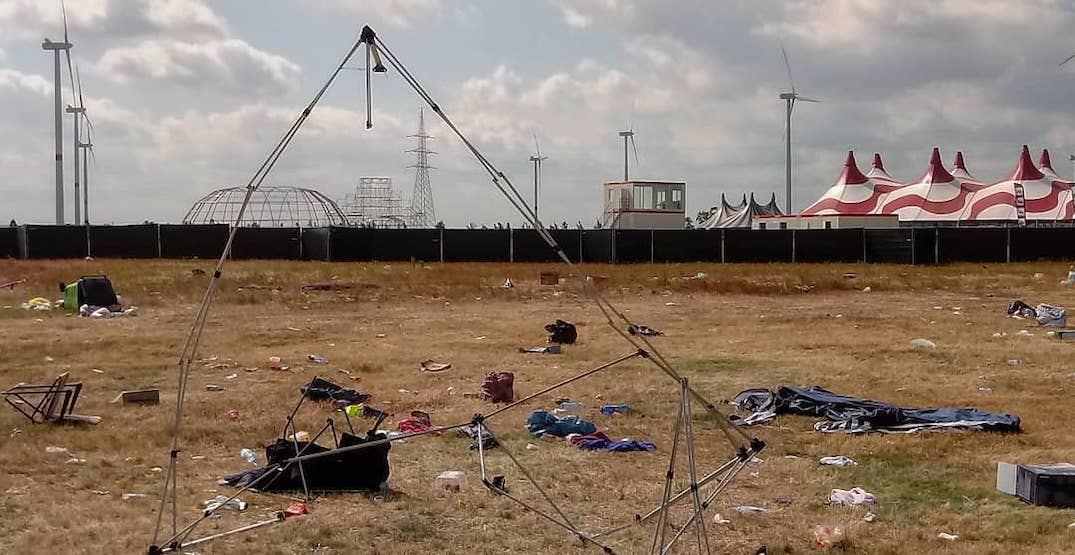 Europe just couldn’t let the Bahamas have all the Fyre Festival fun.

A similar disaster unravelled in Europe this weekend when the VestiVille music festival was cancelled. The event has since been dubbed Fyre 2.0.

Fyre Fest was arguably one of the most publicized music festival disasters in history. Scheduled to take place over two weekends in 2017 on the Bahamian island of Great Exuma, the event promised to be the world’s greatest “luxury music festival” until disaster struck on its inaugural weekend. Instead of luxury villas and gourmet meals worthy of the pricey tickets, attendees were put up in FEMA tents and fed packaged cheese sandwiches.

Fyre Fest was postponed indefinitely and its organizer eventually charged with fraud. The shock and horror surrounding the festival were later captured in two documentaries, FYRE: The Greatest Party That Never Happened by Netflix and Fyre Fraud by Hulu.

While many hoped Fyre was a one-off disaster, VestiVille has just put itself in the running for most epic festival fail.

VestiVille was supposed to be a three-day music festival taking place in Lommel, Belgium from June 28 to 30th. The allegedly “LIT” lineup included top industry names such as A$AP Rocky, Cardi B, Migos, Future, Meek Mill, and Ja Rule.

Attendees from all over the world paid hundreds of Euros for tickets and even more on flights and accommodations after being enticed by event teasers and promo videos.

Unfortunately, festival goers arrived on opening day to discover that the whole event was cancelled. Outraged, they immediately took to Twitter.

Fuming that #Vestiville is cancelled, the fact that it’s in ANOTHER COUNTRY🙃tell me what I’m meant to do in Belgium??

What went wrong at VestiVille?

The entire festival was apparently cancelled after A$AP Rocky announced he would not perform due to “security and infrastructure concerns.”

A$AP Rocky released a statement on Twitter just before 5 pm on opening night to explain his reasons for backing out.

Sooo apparently #Vestiville has been cancelled, #asaprocky pulled out because it wasn’t safe
He allegedly called the authorities because #Vestiville had no security, license or permit for the festival 😱 pic.twitter.com/ULjyG8FxEm

According to the festival’s Twitter and Facebook pages, it was Lommel mayor Bob Nijs who prevented the festival from starting.

Today at 5:00 PM the mayor of Lommel decided to not let Vestiville start. After consultation with the security services and ASAP Rocky’s security officer, it was decided that the safety of the artist and the public could not be guaranteed.

Production and suppliers have given everything to make Vestiville possible. The campsite will remain open for the time being and an organized festival exit will be organized in consultation with the municipality.

The organisation will now consult with their official partners about a refund.

Though the campsite remained open, there was allegedly no food or water for sale. On the ground, further chaos ensued due to a lack of communication, organization, and preparation.

Scenes at @VestiVille were beyond scary. Unprofessional and so unsafe. No announcement regarding cancellation and staff members put at risk. Ridiculous pic.twitter.com/IitjUjvFze

Attendees were also allegedly “stranded” after finding out the event was cancelled due to a lack of organized transport.

Finally leaving Fyre Festival part 2, I’m gonna be the black lady at the end crying for sure 😔 #Vestiville pic.twitter.com/NiNvd79NBX

Rather than leading a safe exit strategy, police forces who were waiting on premises with dogs allegedly caused crowds to panic and run.

Here you can see everyone trying to get inside but are being hold back by the police. #Vestiville #vestiville2019 #Lommel pic.twitter.com/P677yJa0N8

Police were waiting inside with dogs for people to start running in instead of defusing and getting us to leave safely pic.twitter.com/S6T5Kr7DHG

Following the disaster, many couldn’t help but point out the similarities between VestiVille and 2017’s Fyre Festival.

Just like Fyre, VestiVille sold luxury amenities that turned out to be… not so luxurious.

This fake Cardi B voiceover for #Vestiville is sending me 😬🤣 https://t.co/MGSTOoJVGB

Another uncanny similarity is that rapper Ja Rule, a co-organizer of Fyre Fest, was featured on the VestiVille lineup.

Yall saw JA RULE on the #Vestiville lineup and STILL BOUGHT TICKETS?! Lmfaooo yall are really dumber than i thought.

People have also taken to Twitter with several other observations that may warrant deeper investigation.

Wait..hold up, #Vestiville was organised by a pair who call themselves ‘2Crooks’ on Instagram. This can’t be real 🤣

HOW ARE YOU GONNA GO TO A FESTIVAL WHEN THE ORGANIZERS NAME IS LITERALLY 2CROOKS?! DO YOUR RESEARCH BEFORE FLYING TO A DIFFERENT CONTINENT#Vestiville pic.twitter.com/74fz6C0UNk

Many attendees are now seeking refunds, with no sign of success.

#vestiville wait two hours to get in and it’s cancelled, spent 800 pound in total and came all the way from the uk are u mad. And apparently no refund? The debt is mad 🤣

“Went to #Vestiville and LITERALLY all i got was this stupid tshirt” pic.twitter.com/gzJc2FgQXu

Meanwhile, others were solely focused on leaving the festival grounds.

While many festival goers walked away with nothing more than subpar merchandise, a lucky few managed to find the artists who actually turned up and performed on the weekend.

My friend got scammed by the #vestiville ting and then ended up going to a club and treysongz and jacquees just turned up and started performing 😂 pic.twitter.com/xPHDoOn6h8

Think you can put on a better music festival? We know just the place. According to CNN, Saddleback Cay, the private island best known for its appearance in Fyre Festival promotion videos, is now for sale for US $11.8 million.

As for those who prefer to remain festival goers, be sure to do your research and proceed with caution.