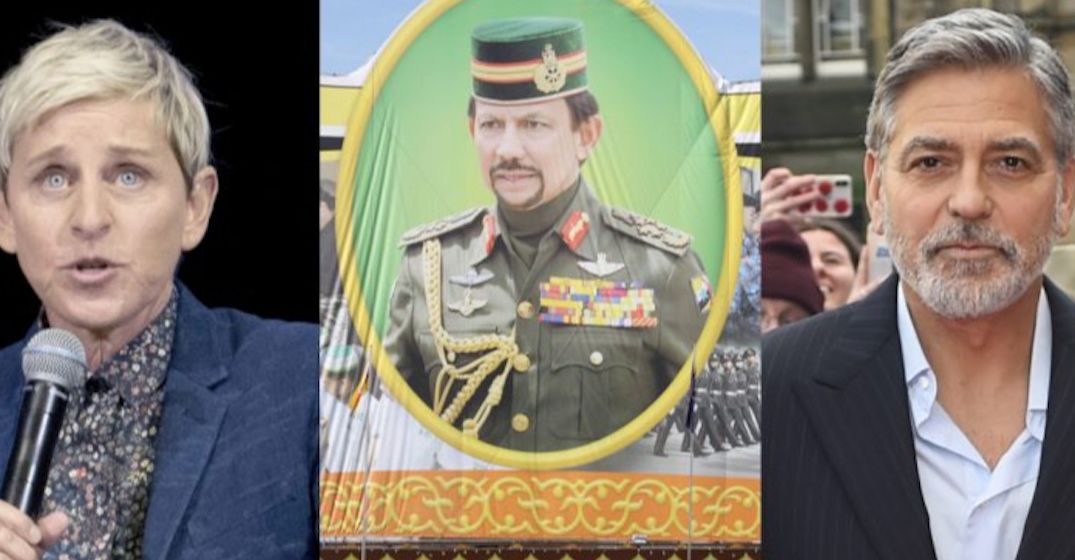 Ellen DeGeneres has officially joined the growing list of celebrities who are urging their followers to boycott nine luxury hotels.

The latest surge against Brunei’s new laws began last Thursday, when award-winning actor George Clooney published an op-ed in Deadline. It was a clear call to action: Boycott Sultan of Brunei’s Hotels Over Cruel Anti-Gay Laws.

As of today, April 3, “the nation of Brunei will begin stoning and whipping to death any of its citizens that are proved to be gay.”

Indeed, Brunei’s Sharia laws have officially gone into effect. It is now legal to punish gay sex and adultery by stoning to death. Similarly, theft can also be punished by amputation. The passing of this law has sparked condemnation around the globe.

Singers Elton John and Lance Bass were among the first celebrities to echo Clooney’s plea. They are now joined by the likes of Nancy Sinatra, Billie Jean King, and many more.

Perhaps most notably, daytime talk show host Ellen DeGeneres has voiced her support of the boycott. For those who don’t remember, — or weren’t around — DeGeneres famously said “Yep, I’m gay” when she came out publicly in April 1997, more than two decades ago. It was a groundbreaking move that paved the way for many others in the LGBT+ community.

Yesterday, DeGeneres Tweeted: “The country of #Brunei will start stoning gay people to death. We need to do something now. Please boycott these hotels owned by the Sultan of Brunei. Raise your voices now. Spread the word. Rise up.”

Tomorrow, the country of #Brunei will start stoning gay people to death. We need to do something now. Please boycott these hotels owned by the Sultan of Brunei. Raise your voices now. Spread the word. Rise up. pic.twitter.com/24KJsemPGH

DeGeneres has publicly supported the boycott since the Sultan renewed his call for the law in 2014. Her original tweet read, “I won’t be visiting the Hotel Bel-Air or the Beverly Hills Hotel until this is resolved.”

Here’s what other celebrities have to say:

This is wrong. The world needs to know. "Barbaric to the core': Brunei brings in gay sex stoning lawhttps://t.co/Emeo7XDq0o

This atrocity begins today in #Brunei. Please join me and spread the word about the boycott of hotels owned by the Sultan of Brunei. https://t.co/GcJnlbq5nb

I believe that love is love and being able to love as we choose is a basic human right. Wherever we go, my husband David and I deserve to be treated with dignity and respect – as do each and every one of the millions of LGBTQ+ people around the world.