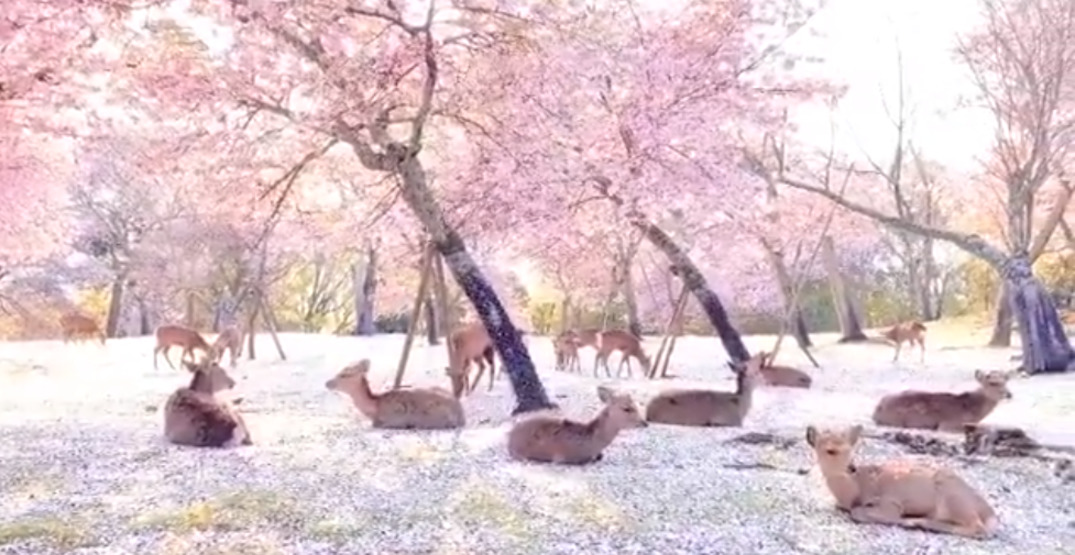 A video posted to Instagram by Japanese photographer Kiki Photoworks has received considerable attention as it features the sika deer of Japan’s famous Nara Park taking up residence among the beautiful bloomed cherry blossoms in the absence of tourists.

While the video is undoubtedly mystical and magical, there has been some misinformation spread regarding the deers’ presence in the park.

Some social media users have stated that the deer are enjoying the flowers and ample space due to the absence of people. One person wrote “no tourists in #japan? No problem,” while another posted “Deer enjoying the cherry blossom trees at Japan’s Nara Park near Osaka unencumbered by humans who are staying home because of lockdown.”

In actuality, the deer occupy the park all the time. In fact, many people journey from around the world just to see them.

According to the Nara Park website, the herd of deer is considered to be a “national treasure” that occupies the park but is not owned by it.

“There is a legend that in AD768, the first of the four gods of Kasugataisha Shrine was invited down from Kashima in Ibaraki Prefecture just North of Tokyo,” the site explains.

“The deity travelled all the way to Mt Mikasa on a white deer. Thereafter, deer were considered sacred, and killing one was punishable by death. After WWII, the deer were officially stripped of their sacred status, but are still protected in Nara.”

Nara Park has become a popular tourist attraction due to the adorable deer, and many people take part in feeding and taking photos with or of them. People can purchase food onsite to feed them and are encouraged to refrain from bringing other food in, as it may make the deer sick.

Since they are still wild animals, visitors are instructed to give the food to them immediately, as they can attack because “teasing makes them angry.”

The deer can also be quite pushy if they see that you have food, as they have become used to seeing people as a food source.

If you would like to up the cuteness factor even more (if that’s even possible), visitors that venture to Nara Park in the late spring will see many new fawns. However, the does and their new babies are protected at the Roku-en deer center until the fawns are old enough to follow their mothers.

Typically, every day in June, visitors can visit and see the fawns before they are released into the park.

Multiple venues of Nara Park remain closed due to the global pandemic. A full list of temporary closures can be found online.