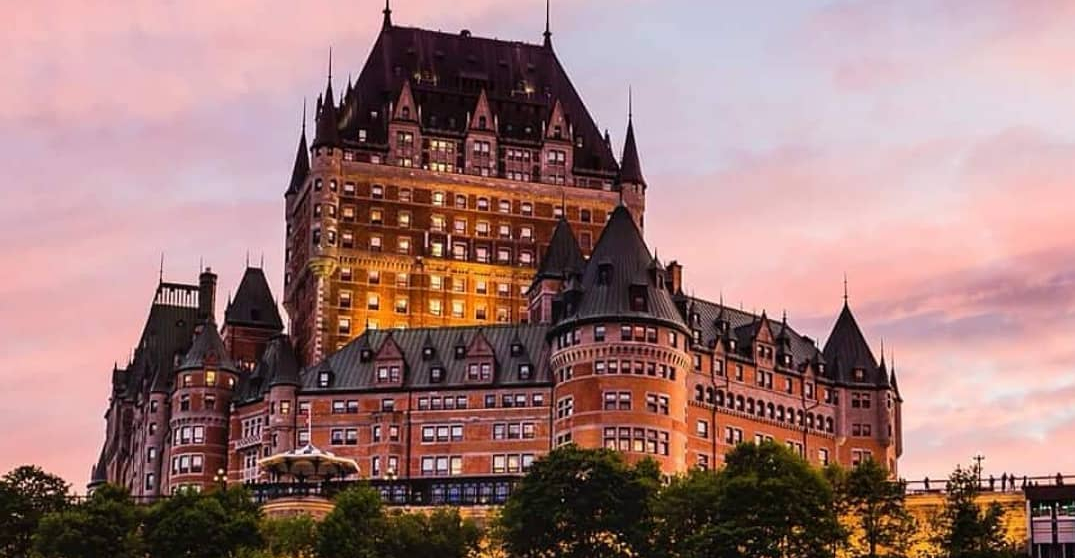 If you’re on the hunt for some outstanding hotels in Quebec, there are a few that are must-tries.

Whether you’re coming to Quebec as a tourist or are a local looking to expand your knowledge of the gorgeous province, these are some hotels that you have to visit at least once in your life.

We’ll see you in the spa.

The Fairmont Le Château Frontenac in Quebec City is said to be the most photographed hotel in the world.

With that said, it’s certainly beautiful. The Château, located in Old Quebec’s Upper Town, sits atop a hill of land and overlooks the Saint Lawrence River.

It’s the most iconic feature of Quebec City and is 128 years old.

The hotel has a sustainable bee program on its rooftop garden and the harvested honey is served to guests at its restaurants.

Prices range per room (starting at $360 per night) but it’s a crown jewel of Quebec — an absolute must-visit during any (and every) season.

Sofitel Montreal is right in the middle of the city’s Golden Mile, an area with great shopping, cafe, and restaurants, minutes away from the Old Port and an easy walk to Ste. Catherine and all of Montreal’s constant foot traffic.

If you want to enjoy a sophisticated stay in Montreal, it’s tough to top the Sofitel.

Overlooking the Saint Lawrence River, the Fairmont Le Manoir Richelieu is perched atop a hill in La Malbaie (about 144 km from Quebec City) and offers picturesque views of the gorgeous old Quebec town.

At $269 (and up) per night, the hotel has on-site activities for all seasons including golf, tennis, ice skating, and snowshoeing, has a spa, sauna, pool, gym, and three dining options. If you want something that isn’t in Montreal or Quebec City, keep Le Manoir on your hotel radar.

You don’t have to be a big time skier to want to stay here (but it’s rad if you are.)

Centred in the heart of the respected ski and snowboard town, Le Westin Resort & Spa puts tourists within reach of any of Tremblant’s snowy peaks.

Summer tourists can take advantage of nearby hikes, bike trails, beaches, and lakes.

Regardless of the season, enjoy the Pedestrian Village which is full of bars, clubs, restaurants, and cafes.

Starting at $269 a night, rooms have giant beds and windows overlooking the mountains. Rooms vary in size and style, some of which have fireplaces, wood furniture,  and hot tubs.

The Fairmont Le Château Montebello might be the perfect halfway point if you’re on the fence between being in Quebec or Ontario.

Situated along the Ottawa River, the luxury hotel is about 120 km from the Ottawa Airport.

The hotel functions as an upscale wood cabin. Complete with wooden furniture, TVs, and large windows to soak up the great outdoors, pamper yourself with a spa treatment or have dinner in front of the massive fireplace.

Le Baluchon is an eco-resort in St-Paulin. If you’re not in the mood for a high-end luxury hotel, this 89-room lodge might be up your alley.

Le Baluchon is on 1,000 acres of trails, forest, and land and offers a variety of rooms for everyone: 10 classic rooms, 30 luxurious rooms surrounded by greenery, or 25 rooms along the river.

The hotel offers a wide range of sleeping arrangements, has great restaurants, an on-site bar, and activities ranging from canoeing and horseback riding in the summer to snowmobiling in the winter.

It underwent a massive $200 million restoration in 2008 and is arguably the best place to stay in Montreal.

Le Ritz offers 129 rooms, a spa, three gorgeous outdoor terraces, a bar, restaurant, and is walkable to all of downtown Montreal’s amenities.

Rooms start at upwards of $600 a night and you know what? It’s worth it.

Nested in the Old Port of Quebec City, the Auberge Saint-Antoine features decor that is over one hundred years old. Coupled with its cobblestone streets, you’ll feel like you’re in early 1900s Europe.

Refreshed with a modern take, the hotel has minibars, coffee machines, and bathrooms equipped with heated floors and no-fog mirrors that might not make you feel like you’re in the 1900s.

The hotel has a chic dining room and bar with stunning views of the Saint Lawrence River and decadent French-Canadian meals.

Starting at $390 per night, the hotel has a gym, spa, bars, and of course, poutines.