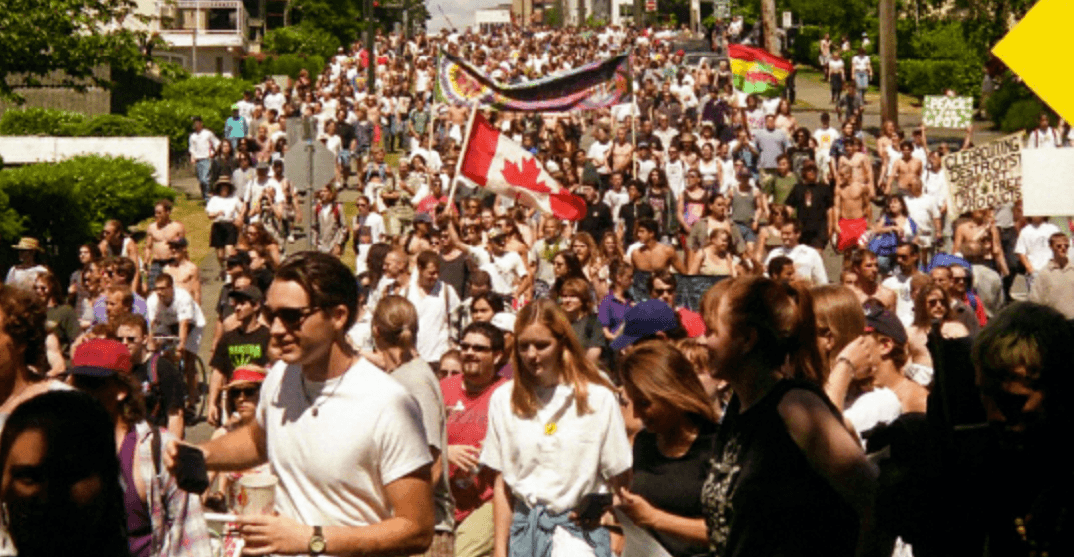 Cannabis Day has roots in the 1970s (http://www.cannabisday.ca)

Organizers from the annual 420 farmer’s market and protest will be back at it this weekend for Cannabis Day on July 1.

Vancouverites are invited to show their support for the cannabis community by rallying at Thornton Park, located just in front of Pacific Central Station.

Cannabis Day festivities will resemble a pared-down version of April’s Sunset Beach event, which drew over 40,000 people and nearly 500 vendors.

The 420 protest was criticized by the Vancouver Park Board for being an unlicensed event that broke the city’s no smoking bylaw, and causing damage to the field at Sunset Beach Park.

It was originally estimated that the field could take up to 10 weeks to repair, although that time was seemingly exaggerated and West End residents took to twitter to claim the field looks pretty the same all year-round.

Daily Hive reached out to the Vancouver Park Board for a comment about Cannabis Day, as they did not release a statement which they had previously done for 420.

Daily Hive was able to confirm that a license was not issues for the Cannabis Day event, but a representative was unavailable for further comment.

Cannabis Day dates back to 1977 as a peaceful protest in Edmonton. Previous cannabis protests at the Vancouver Art Gallery have been met with police interference, but there have been no issues at the Thornton Park location, which is in its second year.

According to the City of Vancouver website, Station Street which runs along the park border, will be closed, but Main Street will remain open.

Where: Thornton Park- 1166 Main Street, across from Pacific Central Station.