Every week we take a closer look at some of the best stoner films of all time and provide some random factoids about the cult favourites in the Grow series: Reefer Rewind.

Have you ever seen the cult classic Dazed and Confused? “It’d be a lot cooler if you did.”

There is no better way to begin this new stoner film series than with the 1993 Richard Linklater classic. So grab your best bud and let’s reminisce.

Not only did the movie become a favourite for both the straightlaced and the permanently cloudy, but it helped launch a few acting careers along the way like Milla Jovovich, Anthony Rapp, Ben Affleck, Matthew McConaughey, and Parker Posey to name a few.

Although most people hold this film in HIGH regard, it completely bombed at the box office making just under $8-million domestically. Most of the money the studio made came from the VHS and DVD sales and of course let’s not forget about the soundtrack which went on to hit double platinum.

Ah yes, the soundtrack, with its timeless rock anthems like Aerosmith’s “Sweet Emotion,” Alice Cooper’s “School’s Out,” and Foghat’s “Slow Ride.” When it comes to Richard Linklater flicks, the music is as important to his movies as the actors. So much so, the writer/director spent one-sixth of the film’s budget on securing the necessary music rights. The songs of the time were so pivotal, Linklater made each actor a mixtape that they had to listen to nonstop in order to get into character as a 1976 high school student.

Of course, most of the characters in this film practically spent every minute blazing to those classic tunes, as well as arguing about aliens, sex, and how much weed George Washington smoked. As authentic as the director wanted the film to be, he ran a very professional set with the actors smoking fake cannabis on the screen instead of the good stuff. Although the cast does admit to being stoned in several scenes, “particularly at the very end,” Linklater told Esquire. So clearly there were opportunities to partake offset.

One of the characters that stood out the most was Matthew McConaughey’s Wooderson. From the simple and now iconic lines, “alright, alright, alright” to, “that’s what I love about these high school girls, man,” Wooderson will forever be immortalized as a stoner legend. The same can be said for Slater, played by Rory Cochrane who made the teenage burnout into a lovable, thoughtful guy, who riffs on the plight of the Native Americans or the unheralded American hero Martha Washington.

What people love about Dazed and Confused is the classic rites-of-passage story from the ritualized hazing to the awkward first encounters with girls. The plotline is simple with very low stakes but it’s so easy to relate or connect with the characters that you enjoy the trip. It also portrays cannabis in a very transcendent and beautiful way, especially near the end of the film when a few characters enjoy a sunrise toke on the high school football field.

Dazed and Confused is not like a lot of other stoner flicks. It actually has some artistic merit, even becoming part of the Criterion Collection.

Linklater’s deep love of film permeates every frame. The opening scene, for example, is a glorious piece of editing, giving the audiences a brief glimpse of the main characters and social groups before the school day begins. By the time the movie is five minutes in, audiences are transported to 1976 thanks in large part to the filmmaker’s attention to detail. 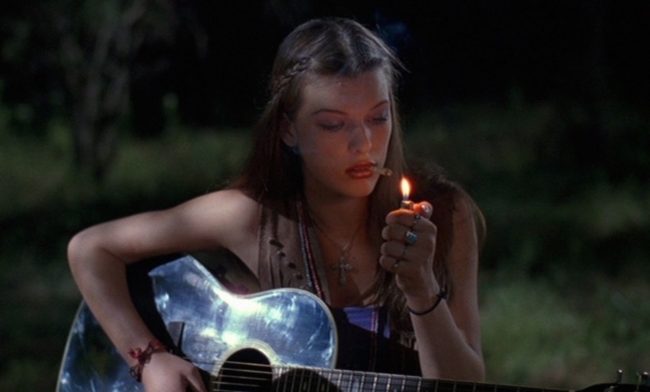 Milla Jovovich as Michelle in Dazed and Confused (Gramercy Pictures)

Linklater, who was 31 when he made the movie, told EW that he’d wanted to make the flip side of a John Hughes movie.

“The drama is so low-key in Dazed. I don’t remember teenage being that dramatic. I remember just trying to go with the flow, socialize, fit in, and be cool. The stakes were really low. To get Aerosmith tickets or not? That’s a big thing. It was really rare when the star-crossed lovers from the opposite side of the tracks and the girl gets pregnant and there’s a car crash and somebody dies. That didn’t really happen much. But riding around and trying to look for something to do with the music cranked up, now that happened a lot!”

It’s time to give this one another viewing along with my recommended pairing of a Blue Diesel or a White Widow strain.