Reefer Rewind is a Grow series that takes a closer look at some of the best stoner films of all time and provides random factoids about the cult favourites.

In August 2008, the stoner comedy Pineapple Express hit theatres and bongs everywhere. Most probably remember Seth Rogen in his suit and James Franco with his grey headband and pyjama pants, going on a crazy paranoid adventure while being pursued by gangsters.

If you haven’t had the pleasure of seeing it yet, you can spark that film up on Netflix right now. Here’s our Reefer Rewind. 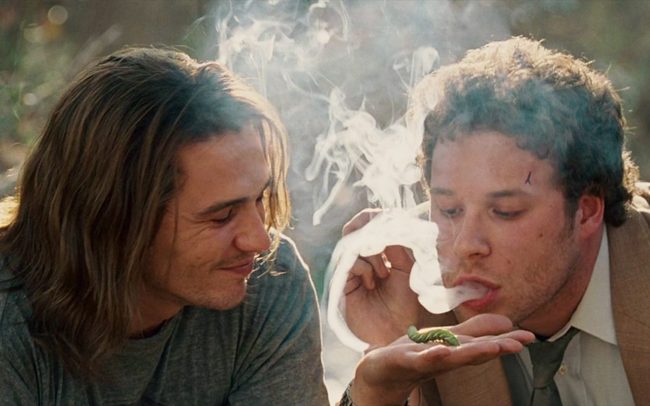 Besides being a hilarious film, Pineapple Express also has the distinction of being a real-life Sativa dominant strain with a 60:40 Sativa/Indica ratio. Ironic because its roughly the same ratio of people who liked/disliked this movie. The reviews were mixed and currently sits on Rotten Tomatoes at 68%.

Coming off the heels of Knocked Up and Superbad, Seth Rogen and Evan Goldberg were on fire with another one of their screenplays getting a rewrite by Judd Apatow. The story was slightly changed and heavily influenced by Brad Pitt’s perpetually stoned character, Floyd in 1993’s True Romance. Apatow “thought it would be funny to make a movie in which you follow that character out of his apartment and watch him get chased by bad guys.”

With that idea in mind, David Gordon Green came on as director and Seth Rogen and James Franco were cast as the leads. Rogen originally wrote the part of Saul for himself, but Franco was given the role after he proved far funnier during the table read. The rest of the cast was rounded out with the likes of Danny McBride, Gary Cole, Rosie Perez, Bill Hader, Amber Heard, and more.

Franco, who doesn’t smoke cannabis in real-life, was so convincing as a stoner that he received a Golden Globe nomination for the role. He went on to say that his approach to the baked character was as simple as pretending to “look into the wind…”

The movie had a $25-million budget and became the first stoner comedy to ever break $100-million at the box office ($102-million), which is impressive considering it was going head-to-head against Christopher Nolan’s The Dark Knight at that time. 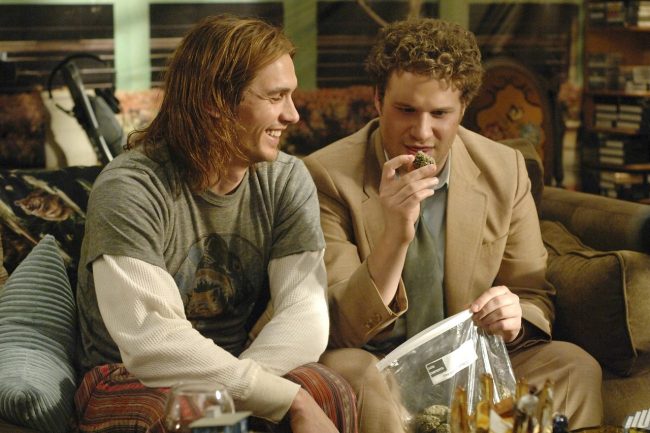 One of the funnier behind the scenes stories involved Franco stealing one of Rogen’s ad lib lines and making it his own. Rogen addressed the theft in an essay and wrote:

“We start filming, and there’s a scene where me and James are smelling a big bag of weed (fucking shocker, I know) and the director cuts. Between takes, I kind of laugh to myself, and Franco’s like “What?” and I’m like, “I just thought of a joke, but I don’t think I can say it in the movie because it’s probably too ridiculous. But I thought I would be funny if when I smelled the weed, I said it smelled like ‘God’s vagina.’ But I don’t think I can say that.” Franco smiles and then the next take starts. We smell the bag of weed and Franco goes, “It smells like God’s vagina!” The director cuts and everyone laughs heartily and showers Franco with praise.”

All the cannabis used in the film was fake, including all the joints which Rogen was responsible for rolling like the cross or “trifecta joint” that is featured in the movie.

The big question that gets asked a lot is whether Pineapple Express will ever get a sequel. Rogen has said many times that he would love to make that happen but unfortunately, studio executives don’t seem too excited about it.

A couple of years ago during a Twitter question and answer session to promote his holiday comedy, The Night Before, the Canadian actor was asked about the chances of a Pineapple Express 2, to which the comedian responded:

Will there ever be a Pineapple Express 2? I hope there will be one day. I think in the Sony hack you can literally read the email where one of the executives decides not to make it. I know I did! So yeah, that’s a fun little behind the scenes glimpse at why there’s no Pineapple Express 2 right now.

It’s great to hear the enthusiasm for a sequel but it’s clear that same excitement isn’t shared by the bigwigs at Sony who still seem rather sore that 2014’s The Interview, which Seth Rogen co-directed and starred in alongside Franco, caused an international incident when it poked fun at North Korea dictator Kim Jong Un. In response to the film, some hackers who called themselves the Guardians of Peace, with supposed links to North Korea, hacked Sony Pictures Entertainment and then spent the next few months systematically embarrassing most of Hollywood with what they found.

So, for now, we can only enjoy a few puffs and rewatch this classic on Netflix and hope the people at Sony decide to pass the sequel joint to the left.