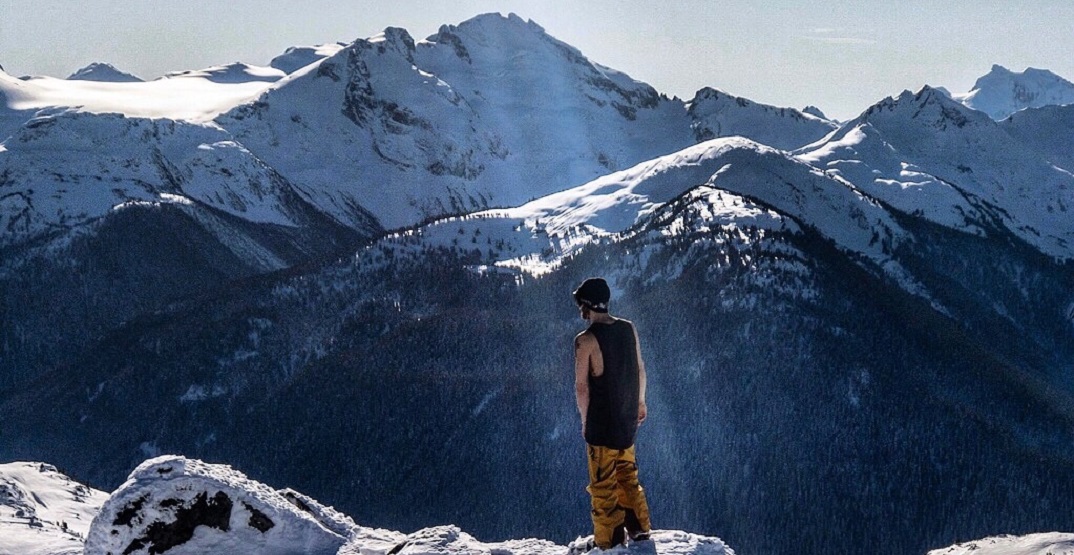 I grew up with a really busy mind.

A combination of ADHD and OCD controlled large parts of my life in ways I couldn’t really break through.

Moments of mental clarity, where my mind could be quiet and not move a mile a minute or obsessively follow rules it had created, were blissful, but few and far between.

I developed a daily amphetamine habit while seeking a solution. No, not speed or meth – though not far off from them. I was prescribed Ritalin by my doctors and given daily dosages to keep me focused. The problem was that this new habit came with unwanted side effects: some extra anxiety (as if my mind wasn’t challenging my perspective enough), loss of appetite, and trouble sleeping.

To me, the side effects almost seemed worse than the initial issues.

High school hit, and I was about to have a radical shift in paradigm. One day after gym class, a friend I had grown up with showed me some marijuana he had picked up. More and more this new substance popped up in my life. My cousin and I began talking about it and decided to dip our toes in and see what this mysterious plant was like.

The first time we smoked, we had these Golden Wraps (closer to a blunt paper than a rolling paper). If you think learning to roll a joint is hard, try rolling a blunt for your first time. We rolled one each, but suffice to say, they didn’t exactly work out as intended.

Maybe it did subtly.

All I can really remember from that day was wanting to walk over to my friend’s house who supplied the herb to discuss the perceived poor quality of the product, but in the end, we decided against it. We had heard you might not feel it the first time, and realistically our roll job was… less than ideal. We decided to let it slide.

For round two of our self-taught rolling skills, we took our time. Again, we spun up a Golden Wrap, and this time it smoked flawlessly. The first time we smoked two joints (like my good friends Sublime are always promoting), but this time we only needed the one.

We got really, really high.

I remember sitting in our friend’s family’s pizza shop across from the forest we had blazed in, giggling hysterically, thinking someone was pushing us off our stools (we were the only customers in there). Over the next year or so, we would only smoke with each other maybe once a month.

Besides giggling and pizza, there was a new experience when I smoked. The demons in my mind forcing me to abide by crazy rules that had be set in place years prior seemed to be yelling a little less loudly. The busyness of my ADHD-mind, which kept me from being able to sit still, or concentrate on anything, seemed to slow down a bit too.

The more I introduced this little dried green bud into my daily practices, the more I saw the intended effects of the Ritalin being satisfied, without the intense and unwanted side effects. I felt more in my body, not less. I felt calmer in my mind, not more anxious. My appetite was normal, and I slept like a baby.

I remember my parents, after finding out about me and my cousin’s habit (and bringing us to the cops), telling me that Ritalin and marijuana had really negative drug interactions, and it was imperative that I didn’t mix them.

Surely the intended result was to get me off the pot, but if I was going to give up one, it was clear to me which one that would be.

I became a daily weed smoker.

I was friends with all the cliques at my high school. I played briscola with Italians at lunch, chilled with the Asian gangs on breaks, studied and took classes with the “gifted students,” worked out with the jocks before and after school. I smoked pot with the stoners whenever there was a free time. In spite of my acceptance I never really fit into any of these categories. I wasn’t a jock, a nerd, a gangster, a stoner – I was just me. None of these aspects of myself, including the weed smoking, defined me. It was a tool to help me find some quiet time in my mind.

Over the next few years, I started trying to shift my worldview. With the weed in my right hand and the continued practice of strengthening my willpower to draw my attention away from my mental conditions, I began seeing some slight shifts in my behaviour. Years later an ex-partner (who is an Occupational Therapist) explained I had been running Cognitive Behavioural Therapy on myself to shift my perspective and break free of the patterning that I had become conditioned to. Progress was slow, but I was starting redefining my conditions.

A few years later, after sustaining a number of relatively serious injuries from snowboarding in the mountains of the PNW, I decided to try this thing I heard about and was all over my hometown – Yoga. 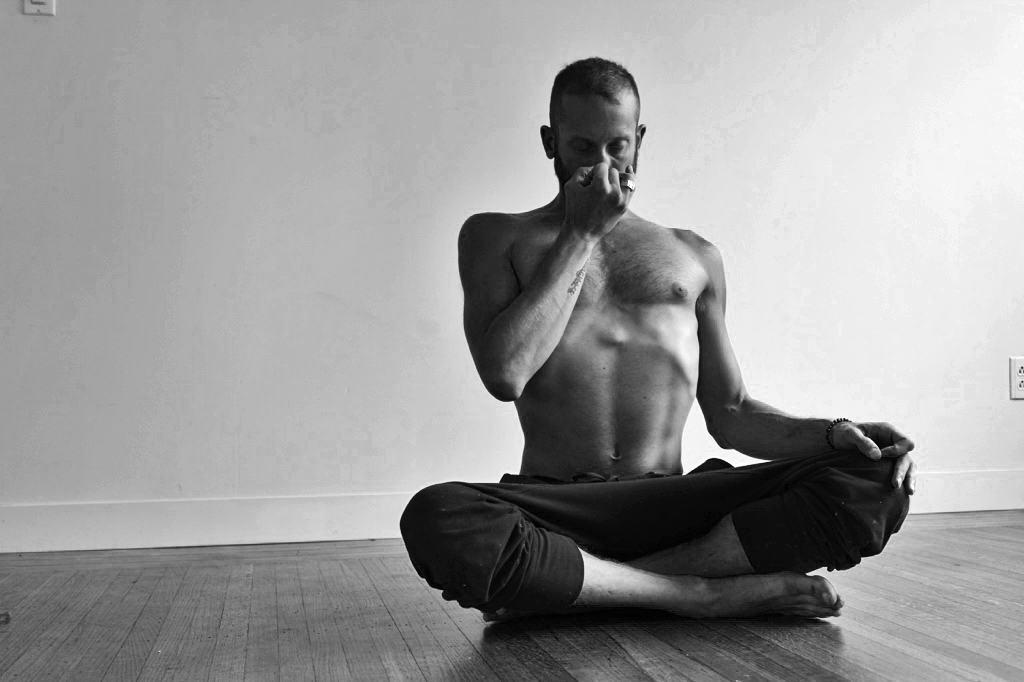 First, I went to a Bikram class, and got yelled at by the teacher (more than once). Then Moksha – I really liked that, but the heat was still a little much for me. I finally stumbled across a teacher that spoke like he was speaking just to me. He taught from a vinyasa school (with more dynamic movement), and, like me, was a former DJ with lots of urban influence.

I was always a little more on the hip-hop side of things (I like to say I was raised by Tupac and Wu-Tang), he was a little more on the reggae side. But I saw how this practice could be a healing modality grounded not only in benefits for the physical body, but also for my emotional, mental, and spiritual well being. Ultimately, the one thing that kept bringing me back to the practice was this sense of calm that I could sometimes access after a class.

I could still be easily distracted, by the pose the person was doing beside me, by trying to push myself into things I couldn’t really do, the sweet tunes being pumped through the speakers, by that cute girl a row or two away, but the more and more I went, the more often I could access this sense of inner calm afterwards. Especially when I sparked a joint before going. The ganja has always brought me back into my body. Coupled with the work done in a yoga class, I would leave classes increasingly more aware of the eternal peace within me, finding myself, for at least a little bit, a little less ruled by the fluctuations in my mind. The progress I had made before started ramping up now that I had more clearly defined tools to be working with. 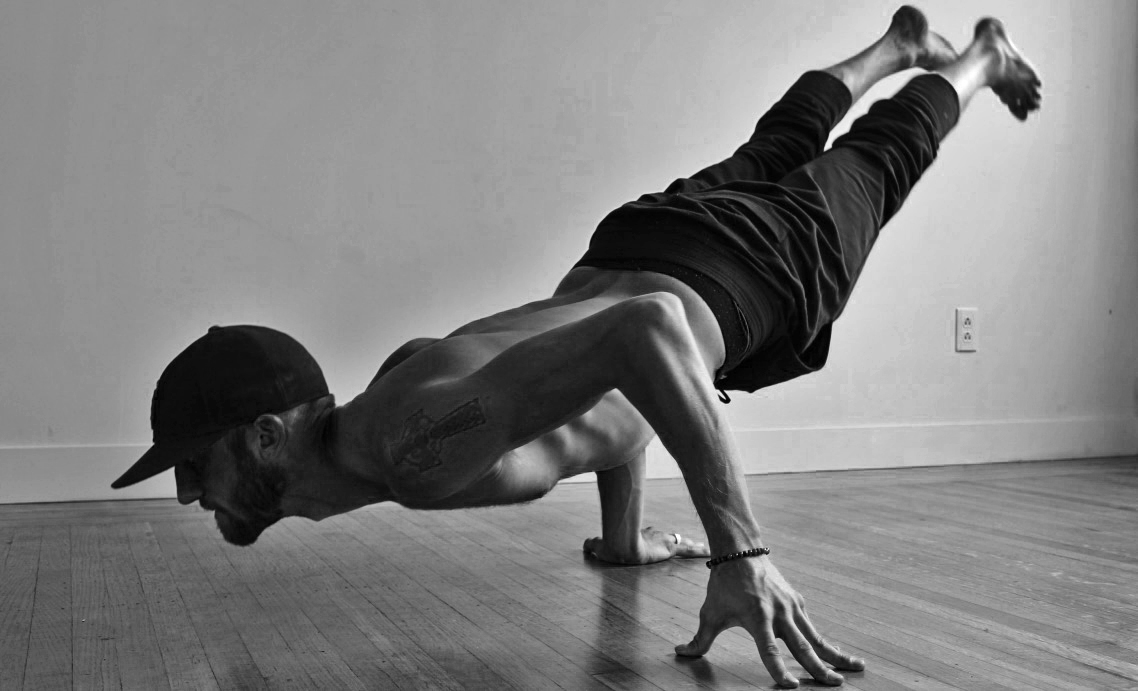 I’ve now been engaging in the practices of Yoga for over a decade. I used to not be able to sit still for even short amounts of time, now 10, 20, 30 minutes can pass with little to no readjustments. My mind was seemingly in constant chaos mode, and now it is much better trained.

Are my demons gone? Absolutely not. Do they control a much less significant part of my awareness? Absolutely.

As the years pass, the more my attention shifts away from the weed, and towards yogic practices, realizing that everything I was searching for – mental clarity, inner peace and calm, more stability – is available to me. I’ve used external sources for over two decades now (initially with Ritalin, but much more prominently with weed), but see more and more how this can all be accessed within myself too. My teacher once told me that one day I wouldn’t need the weed anymore. But that doesn’t mean I wouldn’t still do it! I just wouldn’t have the attachment to it any longer. 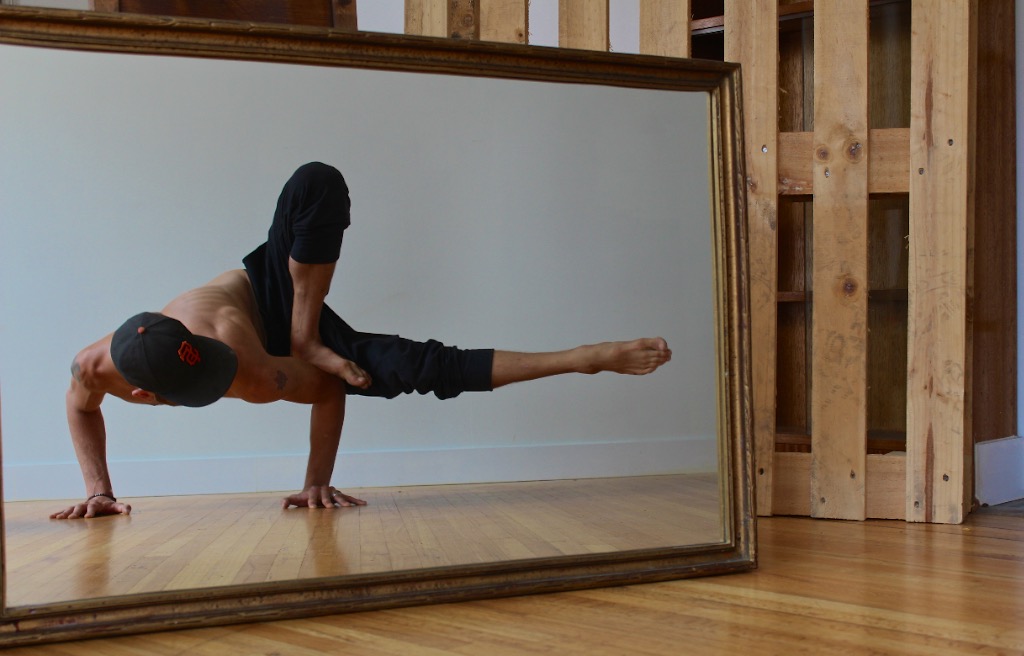 One day that may come, but for the time being I will use the tools available to me how they are needed to keep returning back to a place of inner calm that I have been working my whole life to cultivate, while still preparing for a lifetime of work ahead of me.

One day I may find I no longer need the weed, but until that day as I spark that j, I’ll proclaim, “Boom Shiva,” invoking the name of the first yogi, the transformer, the destroyer of evil, and the Hindu God of cannabis, and with some subtly squinted red eyes, I’ll keep doing my deep inner work.