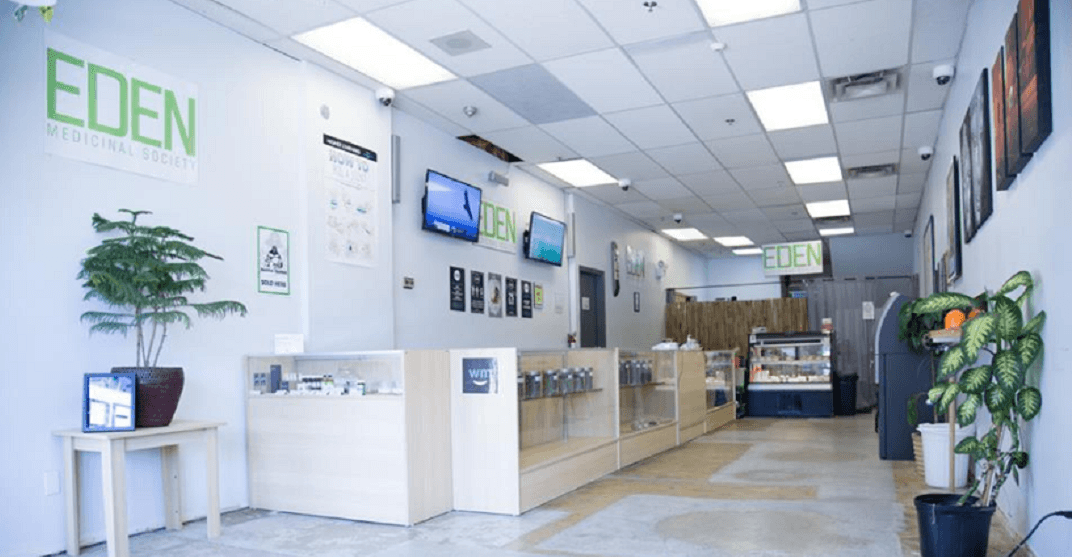 Eden's DTES location is closing at the end of June due to zoning violations. effectively shutting down their Opiate Substitution Program in the neighbourhood (myeden.ca/Facebook)

The public hearing was called to add a new designation to the city’s current zoning and development bylaw by changing the title of “Medical Marijuana Related Use” (MMRU) to “Cannabis Store.”

The purpose of the new designation is to take the existing framework for selling medical cannabis and apply it to the coming recreational market. According to staff, “this is the cleanest way to do that.”

Although zoning and distance requirements for dispensaries were not being voted on, the community came forward to air their concerns.

As the regulations currently stand, dispensaries must be at least 300-metres away from a school, park, or another dispensary.

Eden’s DTES Opiate Substitution Program falls into a “zoning limbo” because it isn’t licensed as MMRU or a methadone clinic. They were unable to get their MMRU licensing after applying in fall 2017 because their location did not comply with the 300-metre distance requirement.

Vancouver’s DTES is a high-density neighbourhood, and distance restrictions mean the area will be underserved.

Brennan expressed that, “People in areas without sufficient access to legal options will continue to turn to the black market for opiates and other illicit substances, without a safe point of sale or therapeutic wisdom or guidance.” Many of the people Eden supports through their program don’t have a fixed address or bank account and are therefore ineligible for online retail.

Rob Laurie, a Vancouver-based lawyer who represents 15 dispensaries, criticized the 300-metre requirement for being based on Colorado and Washington’s “US federal criminal sentencing guidelines” that were enforced to create drug-free zones.

He noted that several states have reduced the buffer to 150-metres and that Saskatoon recently recommended a160-metre buffer as 300 is “unduly restrictive.”

According to Laurie, the distance requirement is “an elimination strategy as opposed to a regulatory one.”

Dana Larsen, a well-known cannabis activist told the council that “if you only change one rule, make it the distance regulation.”

Many of the speakers addressed the use of cannabis as a harm reduction tool, emphasizing its role in pain mitigation and opioid substitution.

“Keeping people alive should be the top priority,” said Larsen.

Larsen echoed comments made regarding cannabis as medicine and an effective tool in helping reduce opioid dependency.

Neil Magnuson from the Cannabis Substitution Project heatedly addressed the council by accusing them of “wasting our time” and “letting us speak so that we can say that we did and then carry on with the imposition of more discriminatory, unjustified, oppressive regulations.”

She implored the council to “include the potential of cannabis as harm reduction tool” as a criteria for license applications, noting that “policy is strongest when it protects our most vulnerable people.”

Jeremiah Vandermeer, an organizer of Vancouver’s 420 protest at Sunset Beach Park and CEO of Cannabis Culture, said “we want to be legal, that’s all we’ve ever wanted.”

Proximity regulations mean the current Cannabis Culture locations, which employ over 100 people in Vancouver, would not be able to get licensed and transition to the legal market.

Vandermeer asked city councillors to “devise a program that would allow for long time dispensaries to become legal in their current locations,” citing the prohibitive cost of moving and lack of available space to rent.

Carly Bauer, a Cannabis Culture employee and the youngest speaker of the evening, said that being five credits shy of finishing high school, she would never be able to find a job that pays as well as her dispensary gig, and that overly restrictive laws will mean a loss of income for many people working in the industry. 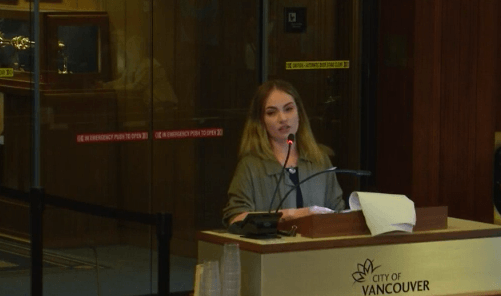 Carly Bauer is an employee at Cannabis Culture (civic.neulion.com/cityofvancouver)

Ehren Richardson, Vice-president of the Canadian Association of Medical Cannabis Dispensaries (CAMCD), reminded councillors that “we were included in the formation of this bylaw and were instrumental in its implementation” with the hope that the city will continue to collaborate to create and implement new legislation for legalization.

“We believe there is a common ground that we can strike with the city,” said Richardson.

Bert Hick, founder of Rising Tide Consultants Ltd., expressed his concerns about “the unintended consequences of distance requirements” but complimented city council “taking the leadership to bring in this bylaw several years ago.

“Every case should be evaluated on its own merit.”

Out of 140 applications for licensing that have been submitted since 2015, 19 have completed business licensing requirements for the MMRU and Compassion Club designation. While 46 have land use approval but are not licensed to operate. 75 dispensaries are currently operating outside of zoning and licensing requirements.

City Council voted unanimously to expand the current MMRU definition to extend beyond medicinal cannabis to include recreational retail.

Zoning regulations, including proximity, were not voted on at this meeting, and will likely not be revisited until a year after legalization, according to staff recommendations.