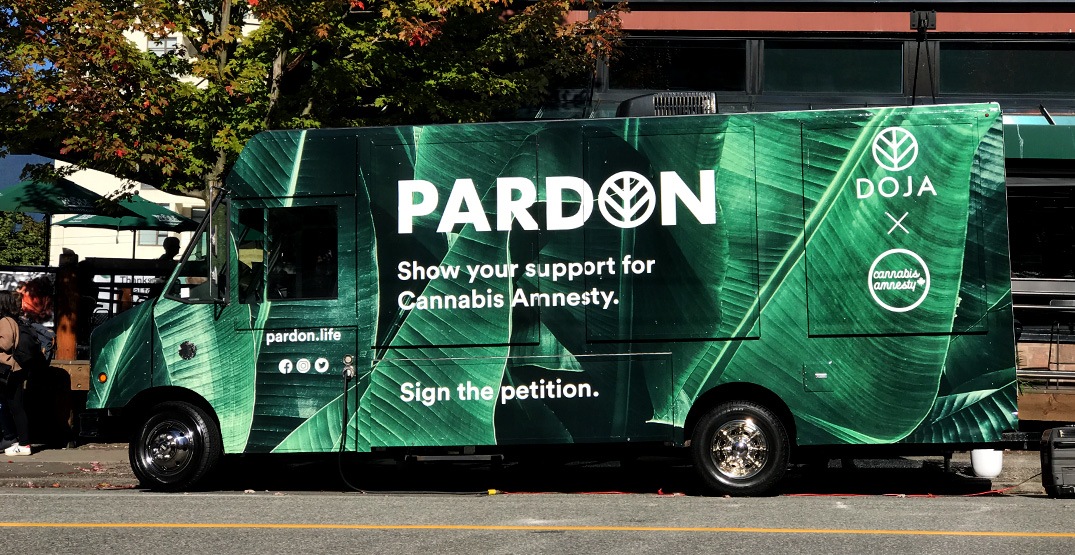 The PARDON truck is touring around, gathering signatures and selling select items (PARDON)

DOJA is the latest licensed producer to team up with Cannabis Amnesty, a not-for-profit organization petitioning the government to expunge the records of Canadians who have been convicted of cannabis possession.

PARDON is a new campaign that supports Cannabis Amnesty by selling clothing and accessories that will go towards funding the initiative and bringing attention to the effort.

As many as 500,000 Canadians are living with a criminal record due to cannabis possession in quantities that will no longer be illegal as of October 17.

“Canada is on the verge of legalizing the personal possession and use of cannabis by adults, something which previously carried with it penalties under the criminal code,” Trent Kitsch, CEO of DOJA told Daily Hive in an email.

“With this massive change being made, we think it’s only fair that those who have been living with a criminal record because they simply possessed a small amount of cannabis for personal use should have that burden lifted.”

Limits on renting a home, finding employment, and volunteering are some of the challenges facing individuals with these charges.

“Canada is showing global leadership by legalizing the recreational use of cannabis – we have an opportunity as a country to also demonstrate fairness in this regard as well,” said Kitsch.

“One thing that has really struck me running this campaign is how open the companies that have stepped into this space are to support this initiative,” Annamaria Enenajor, a criminal defence lawyer and campaign director for Cannabis Amnesty, told Daily Hive over the phone.

“There is an institutional knowledge of the harms that prohibition has caused and it’s very fresh in people’s minds.”

According to Kitsch, “this initiative is all about fair treatment for Canadians who should no longer have to carry the burden of a criminal record for activities which are now about to become fully legal.”

Enenajor also pointed out that people of colour are most often criminalized for these types of crimes.

“Racialized Canadians are over-represented in statistics looking at cannabis possession charges. This is because the laying of charges is a discretionary decision made by front-line law enforcement and in some cases, prosecutors.”

The goal of the PARDON is to help raise funds and awareness, and mobilize “tangible action that will send the strongest possible signal to lawmakers in Ottawa that Canadians believe granting the pardons is the right thing to do,” said Kitsch.

You can contribute to PARDON by purchasing products at pardon.life. You can also sign the petition on the site, which has already amassed close to 4,000 signatures.