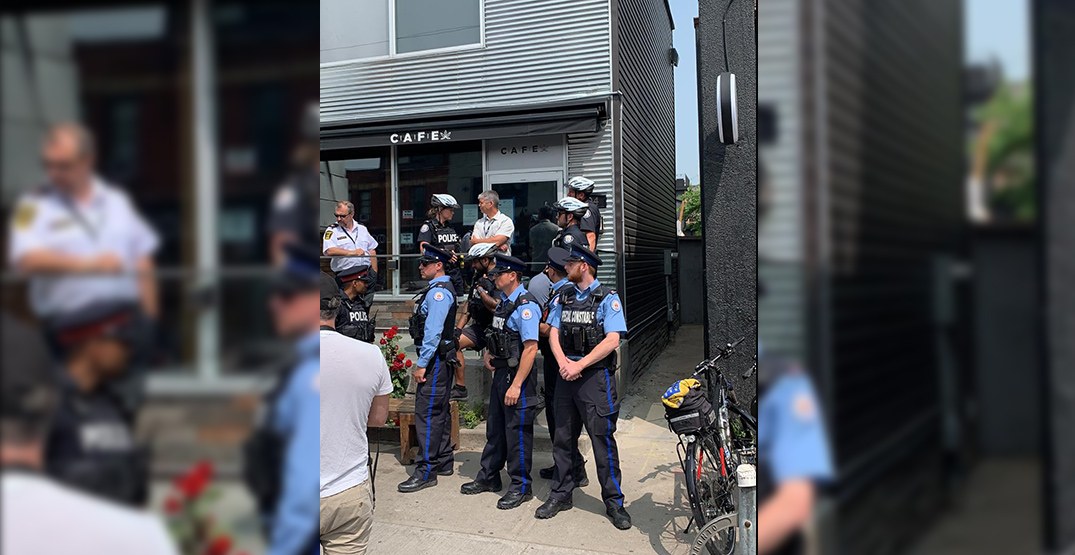 Toronto police and the operators of cannabis dispensary CAFE continue the tit-for-tat game of cat and also cat against one another.

The unlicenced retail outlet’s four Toronto locations have been shut down multiple times, blocked off with concrete blocks, and are constantly being visited by police. Yet in spite of this, cannabis continues to be sold, in some cases right outside the shuttered locations.

Most recently, police arrested a reported nine people for unauthorized distrbution of cannabis, who they said were selling outside of two of the closed locations. During these arrests they also charged a 16-year-old boy, who they allege was purchasing cannabis from the sellers and redistributing it to others for cash.

It was during their action against CAFE that police tweeted on July 21, “illegal dispensary sellers fled the scenes, leaving behind for police multiple iPads with customer names, financial information and orders, illegal product labelled for their customers.”

The illegal dispensary sellers fled the scenes, leaving behind for police multiple iPads with customer names, financial information and orders, illegal product labelled for their customers along with debit machines and walkie talkie radios. 3/4 ^sm

Many unlicensed dispensaries both before and after legalization in Toronto ask for a range of customer info, including a customer’s name, address, phone number, email, and more. If you were a CAFE customer at some point, and are worried about the police potentially having your personal info on a seized iPad, one legal professional says you’re probably alright.

“They would have to obtain a warrant if they do want to go through customer data,” Harrison Jordan, a Toronto lawyer who focuses on cannabis, told Grow. “And do what’s prominently called a fishing expedition.”

What the police can do though, according to Jordan, is search for evidence related to the suspects they have already taken into custody. Doing much else besides looking for evidence for the case at hand would require authorization from the courts.

And while CAFE fights to find a way to keep its doors open, Jordan took the time to explain that CAFE is not exploiting any legal loopholes, they’re simply breaking the law.

“There’s no loopholes there,” he said. “They’re subject to federal and provincial offences.”

Jordan said that the loophole the company had once taken advantage of — where CAFE said the barring of the doors was restricting the access to a private residence upstairs — was closed by the city last month.

Grow reached out to Toronto police for comment, but did not hear back by time of publication.