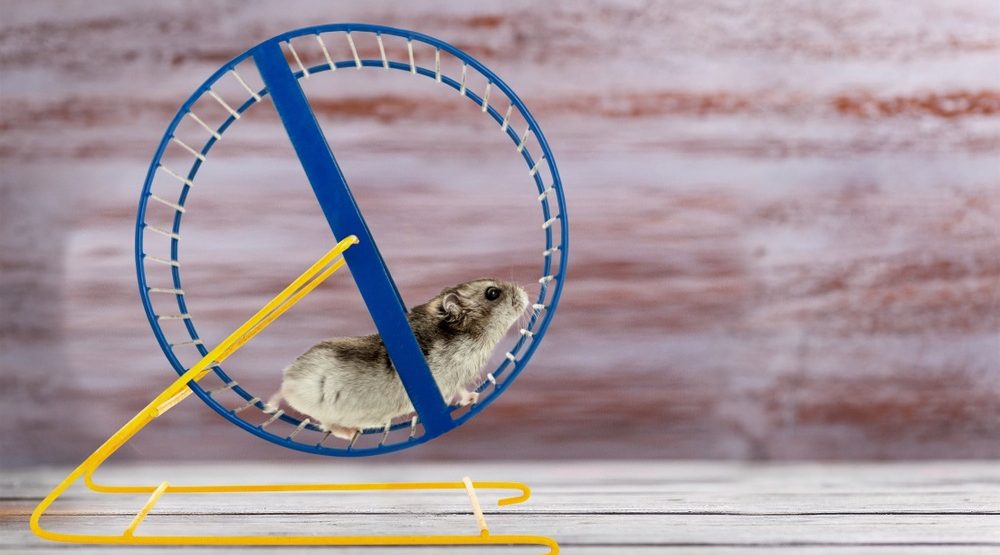 Maybe we should start calling them the “runchies.”

That part of the brain that doles out the psychoactive effects of cannabis might also be responsible for the innate urge to exercise in mice, according to a March 2019 study published in the Journal of Clinical Investigations.

In fact, the study found, these brain receptors might have a unique role in the desire to run, more so than with other urges like eating. The conclusion suggests that with further study, cannabinoids could be put to use curbing obesity and eating disorders.

“This study is the first to our knowledge to identify a neurobiological mechanism that might contribute to sedentary behaviour,” the authors note. In other words, in the never-ending balance between consuming calories and burning them, cannabinoid receptors might be part of the trigger that tells the body to exert energy.

The research was conducted by a team at NeuroCentre Magendie in Bordeaux, France, that has previously explored how cannabinoids, specifically THC, fuel appetite.

In this study, the team used mice and a running wheel to measure desire for activity. A group of mice was trained to poke their noses into a hole in order to access the wheel. The poke was just enough effort to show desire and allow the research team to measure that desire under various conditions.

The researchers recorded how mice with varying endocannabinoid systems (ECS) behaved. The ECS is the network of receptors throughout the body that respond to plant cannabinoids such as THC and cannabidiol (CBD), as well as the endocannabinoids the body produces on its own. The study looked specifically at CB1, the ECS receptors found widely throughout the brain and nervous system that are responsible for the psychoactive effects of cannabis.

A group of mice that received a compound limiting CB1 receptors from working put forth much less effort to run than those who didn’t. These mice gave up on nose-poking sooner. Additionally, another group of mice genetically bred with fewer CB1 receptors also showed less desire to run.

“Taken together, these pharmacologic and genetic findings indicated that CB1 receptors exert major control on wheel-running motivation,” the researchers wrote.

Cannabinoids’ role in exercise has been explored in a number of previous studies. A 2015 study for the US National Academy of Sciences found that in mice the feeling of euphoria during exercise — the so-called runner’s high— depends on the CB1 receptors in the part of the brain where dopamine flows.

But the Bordeaux study is the first to also consider motivation in exercise, thanks to the mice’s nose-poking requirement. The previous studies involved free or forced running, which does not factor in “wanting” to run, the article notes.

The researchers also compared running motivation to other urges mediated by the brain. They looked at how the same conditions affect mice and their desire to eat. In a separate session, mice poked their noses and were rewarded with food. In this case, those whose CB1 receptors had been inhibited or eliminated did not show the same drop in desire to eat as with running.

Exercise can be as much a mental challenge as a physical one. Many of the familiar motivators we rely on are extrinsic; we run because we know it’s good for our health, longevity, self-satisfaction, or sex appeal. The study identifies the ECS as an intrinsic motivator.

In addition to being responsible for the feel-good effects of cannabis, the endocannabinoid system is involved in broad bodily functions, such as regulating mood and appetite. Low cannabinoid levels in the body have already been tied to illnesses and symptoms such as anxiety, depression and degenerative disorders such as Parkinson’s disease. The latest research suggests cannabinoids may help balance food intake and energy expenditure by driving us to exercise.