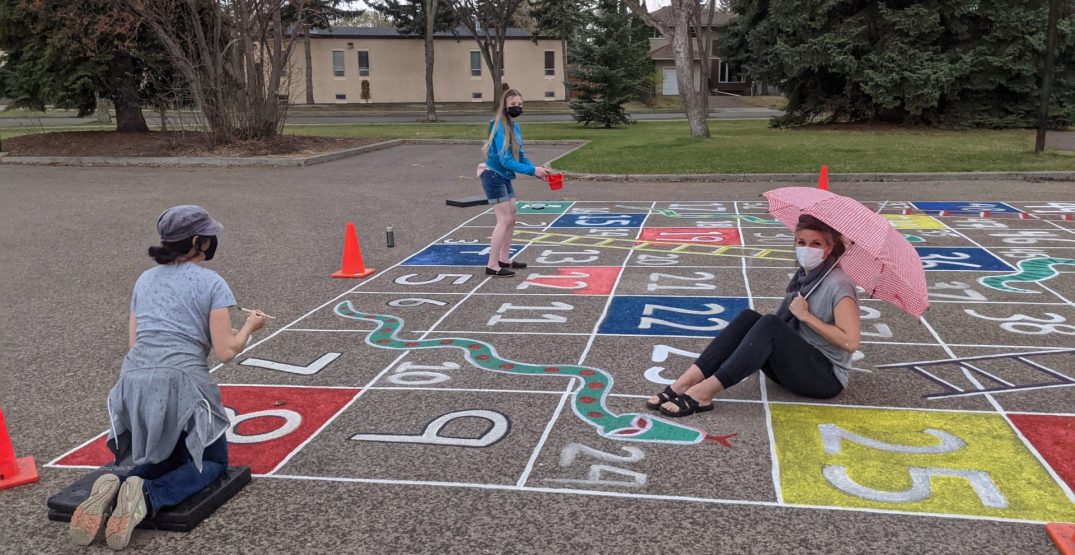 Construction of the "Snakes and Ladders" game (Courtesy of Kristie Edwardsen)

A 784-square-foot “Snakes and Ladders” game has been created in the Edmonton neighbourhood of Parkview in an effort to spread joy and positivity to the community.

Kristie Edwardsen, a Parkview resident and mom, came up with the idea and approached the community league about constructing the game board.

“Basically we wanted something to try and give the kids something to do,” a spokesperson for the Parkview Community League told Daily Hive. “We see a situation where kids are not having anything to do and are getting bored and frustrated. This way they have something that they can do that’s for fun.” 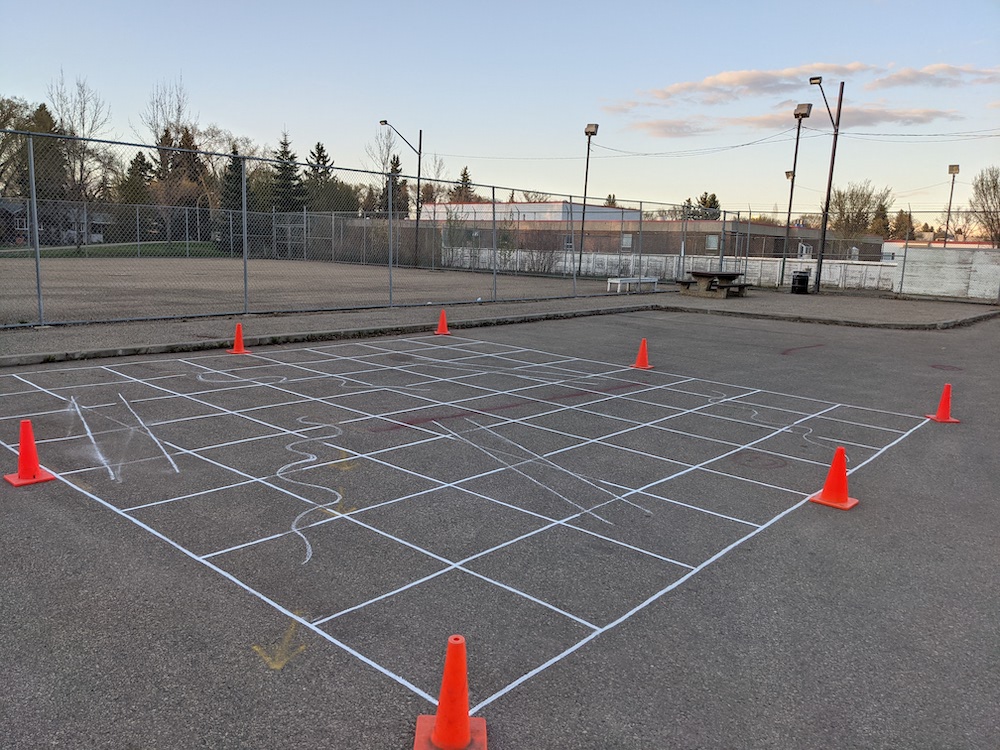 The game was constructed over three days, with three people working together for about four and a half hours on the first day to measure and line the board, and six people painting the board on the second day.

The board was created using washable Tempera paint, but a rainstorm last week washed away their progress before the paint had a chance to dry.

Edwardsen says that it was a beautiful sight to see the swirling colour move through the water. “It also was a great teachable moment for everyone young and old,” she continued. 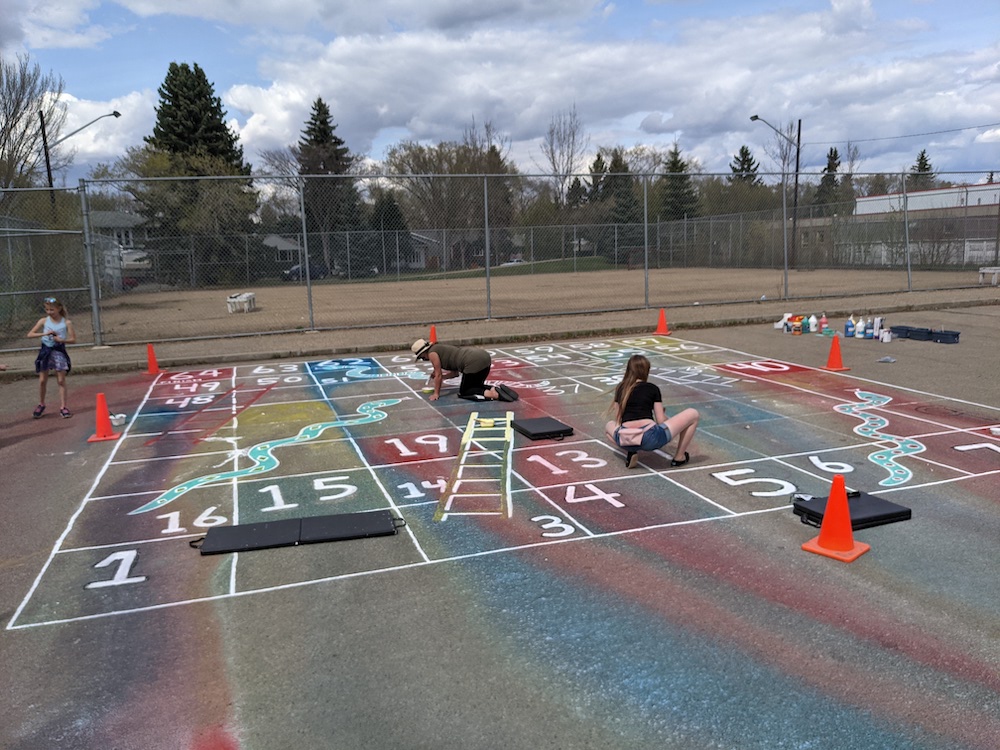 This didn’t dampen the volunteers’ spirits, and six people were back out the following day to recreate and finish the “board.” Edwardsen and her daughter stayed at the park until about 1 am to complete the project.

“We can’t control everything, things don’t always go the way you plan. But if you look at the beauty in the process you realize how amazing such a moment like this one is. You learn and move forward.”

Parkview’s Snakes and Ladders game board has 64 squares, each measuring in at three-and-a-half feet, with the whole game coming in at 28 feet by 28 feet.

Edwardsen is no stranger to large-scale art projects. Last year, she and four others created a life-sized Monopoly board in the Crestwood Community.

“It was an amazing initiative that created so much positivity and joy for many,” she told Daily Hive, adding that the project sparked a citywide “#chalktheblockyeg” movement, which focused on spreading kindness.

When asked about her inspiration for this project, Edwardsen replied “Snakes and Ladders was a game that I had played as child with my family. It was one of my favourites as a child and now as an adult it is still brings so much joy.”

“I wanted to find a way to share this joy with others.”

She added that she admires big artwork pieces and installations, and wanted to execute this project in a large open space. “Furthermore,” she added, “I love collaborate art. It brings people together in a very positive way. Something we all could use during these uncertain times.” 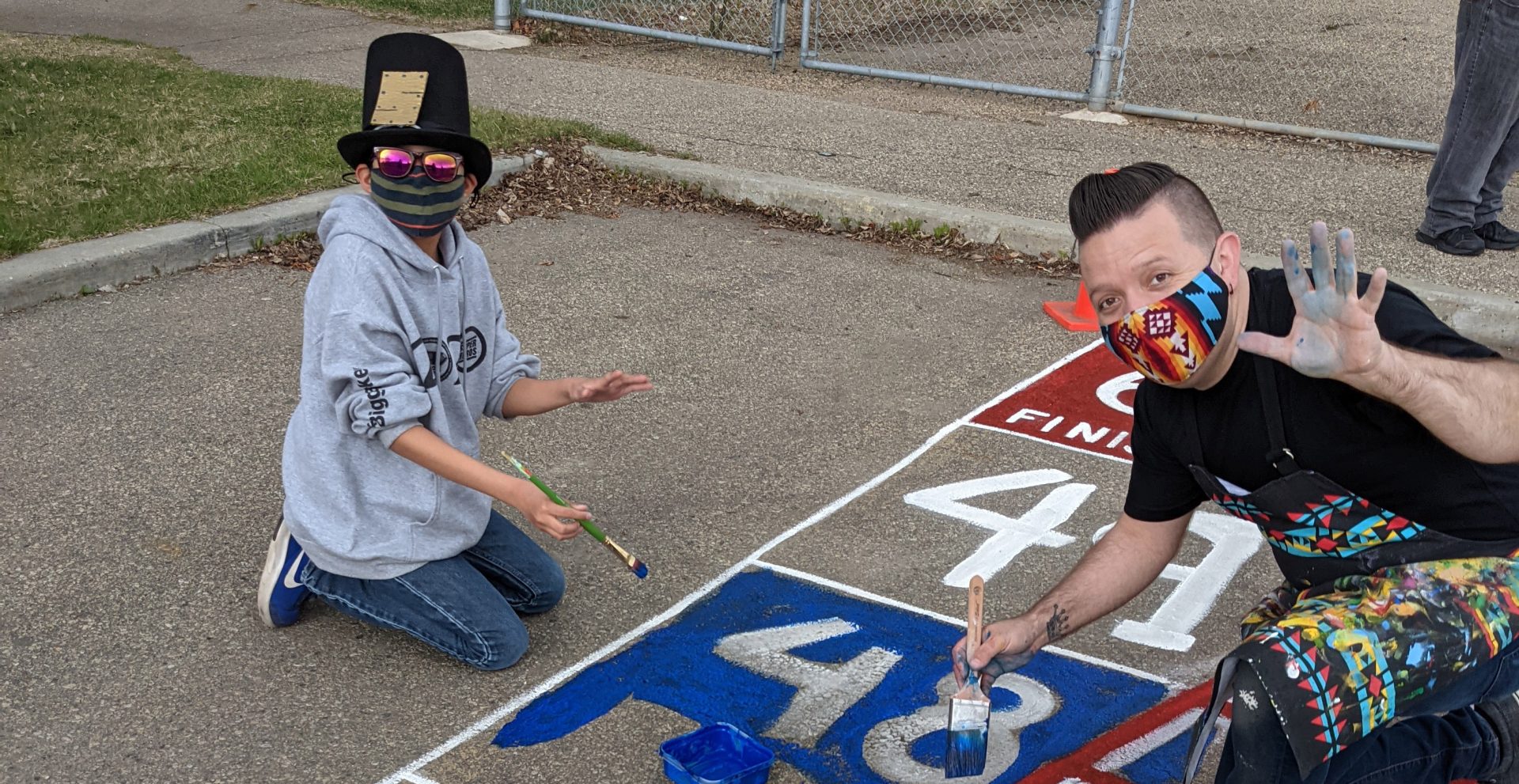 The project was finished on Thursday, May 13, and is now open for all Edmonton residents to enjoy at the Parkview Community League (9135 146th Street NW).

“The game is for everyone,” says Edwardsen. “As a Parkview community member, the only ask is that everyone enjoying the board be respectful, follow the current restrictions put forward from this pandemic, and have fun.” 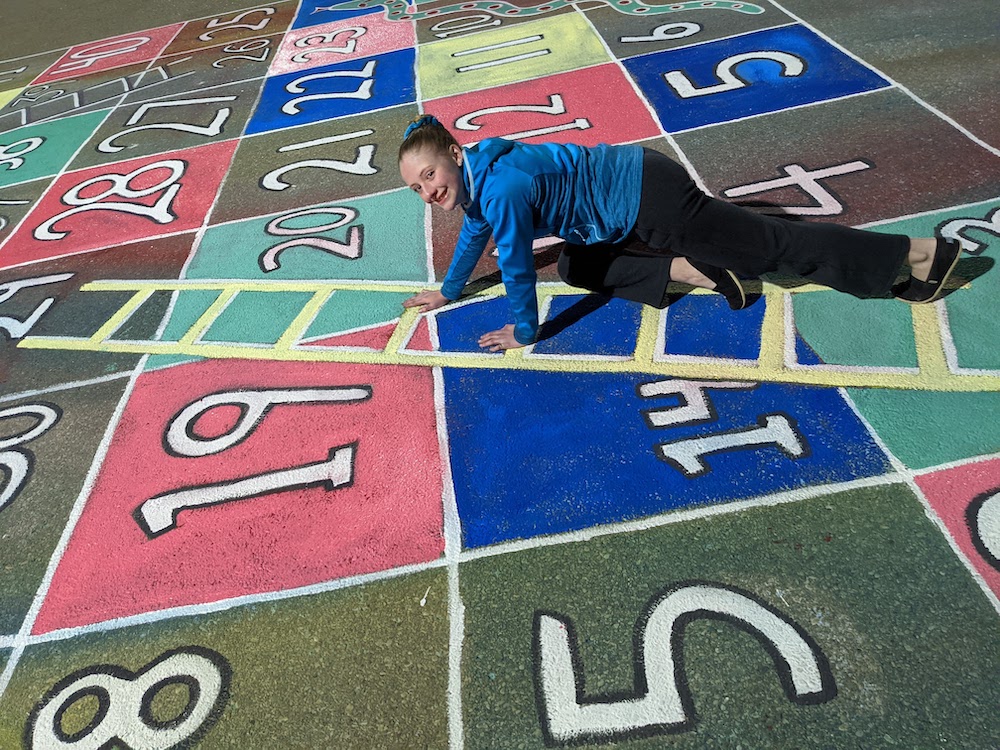 Parkview Community League suggests that players bring their own dice, or download an app for their phones that give them the ability to “roll” dice.

According to Edwardsen, dice is optional. “All players need is their imagination,” she says. “I have seen many using the board as a hopscotch board, an imaginary story board, a counting game, a colours game. The possibilities are absolutely up to you.”

The community encourages Edmontonians to be creative with how they play the game, and to adhere to all public public health protocols.