The provincial government has announced six more deaths associated with COVID-19, bringing Quebec’s death toll to 31, an increase from 24 hours ago when there were only 25.

As part of his daily briefings, Premier François Legault revealed that known cases in the province have spiked to 4,162.

He also mentioned that 5,601 cases are “under investigation” and 63,378 tests have turned up negative.

Montreal’s confirmed cases have spiked to 1,991 – the highest in the province – followed by the Estrie region at 365, and the Montérégie area at 341. 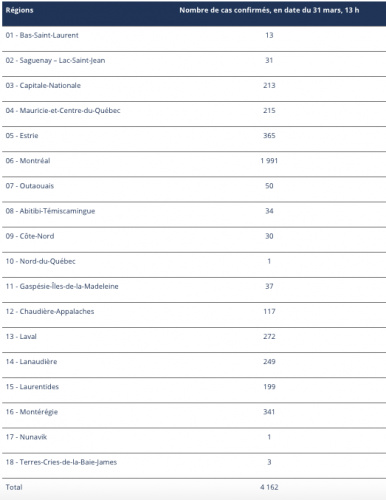 According to Santé Quebec, “the significant increase in confirmed cases is explained by the fact that since March 22, cases tested positive by hospital laboratories are now considered confirmed. They no longer need validation by the Laboratoire de santé publique du Québec (LSPQ).”

According to the Government of Canada’s website, 92 deaths have occurred in the country as a result of the virus, including 33 in Ontario and 19 in British Columbia.