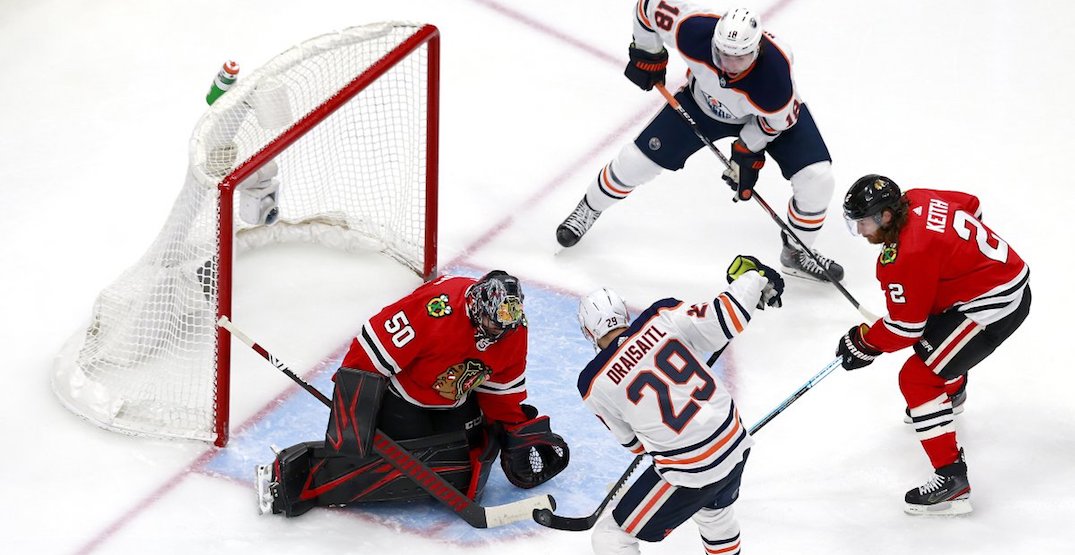 The season is over for the Edmonton Oilers, following a 3-2 win by the Chicago Blackhawks in Game 4.

The 12th seed in the Western Conference, Chicago wasn’t likely to make the playoffs when the NHL paused play back in March. The Oilers, meanwhile, sat in second place in the Pacific Division.

That was then, and this is now, as the Oilers beat themselves in many ways during the best-of-five series, losing three of four games.

Rookie Dominik Kubalik was the hero for Chicago, as he scored the winning goal midway through the third period when Jonathan Toews set him up after winning a puck battle.

Josh Archibald opened the scoring at 0:45 of the first period.

That’s the second-fastest goal by an @EdmontonOilers player from the start of a game where they were facing elimination, behind only the mark of 0:16 set by Fernando Pisani (Game 5 of 2006 SCF). #NHLStats #StanleyCup pic.twitter.com/7W3iGPDKHz

The Oilers actually got off to a great start, getting a goal from Josh Archibald 45 seconds into the game. The Blackhawks struck back not long after, with goals from Brandon Saad and Matthew Highmore less than two minutes apart.

Ryan Nugent-Hopkins tied the game early in the second period, but that was the last time Edmonton would beat Blackhawks goalie Corey Crawford, who made 41 saves on the night.

The Oilers had great chances to tie the game, but Crawford proved too tough to beat.

Oilers head coach Dave Tippett pulled out all the stops, playing each his top three forwards over 24 minutes. Connor McDavid played a game-high 26:39, followed by Nugent-Hopkins (25:22), and Draisaitl (24:47).

The focus for Oilers fans will now turn to the NHL Draft Lottery on Monday, in which Edmonton will have a 12.5% chance at securing the first overall draft pick.