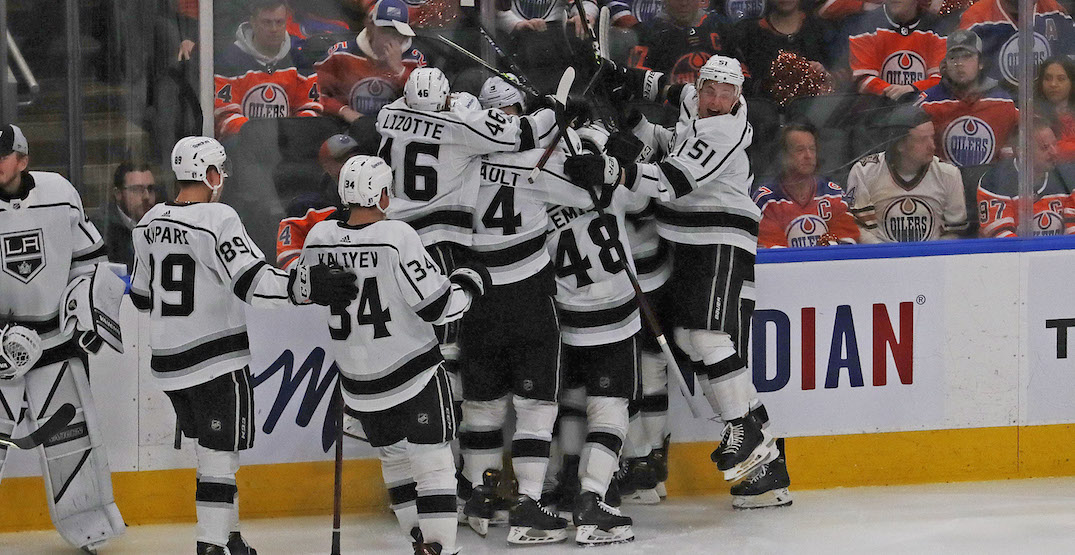 The Los Angeles Kings are on the brink of pulling off the upset.

A team that was widely expected to be out of the playoffs this season is one game away from Round 2 after defeating the Edmonton Oilers 5-4 in overtime in Game 5.

Adrian Kempe scored the first two goals of his playoff career, including the overtime game-winner.

Game 6 will be played in Los Angeles on Thursday night.

We scored four goals tonight.” Connor McDavid told reporters after the game. “That needs to be enough to win a playoff game. Obviously, it’s not.”

The Oilers were asleep to start the game, falling behind 1-0 to LA after the first period. They were outshot 16-5 by the Kings after 20 minutes.

However, Edmonton did battle back from two separate two-goal deficits.

Philip Danault scored a power play marker with nine minutes remaining to give the Kings a 4-2 lead. But, two late third period goals from Leon Draisaitl helped Edmonton push the game past 60 minutes.

Draisaitl is now tied with four other skaters, including Evander Kane, for second overall in the NHL with five playoff goals.

Despite his individual success, Draisaitl wasn’t thrilled with his team’s overall performance.

“We got outskated early on and once we found our legs, it was a lot better for us obviously but, yeah, five goals against isn’t going to cut it,” Draisaitl said to reporters after the game.

“This is on us, we’re not playing to our standard.”

Along with Draisaitl, McDavid was his usual brilliant self. He set up Zack Kassian for the Oilers’ first goal before scoring one of his own early in the third period.

He got loose. #LetsGoOilers pic.twitter.com/6rYZLs1Jck

Despite McDavid and Draisaitl combining for six points, it wasn’t enough for the Oilers.

“Tough way for us to lose,” Oilers head coach Jay Woodcroft told reporters after the game. “Being down early made it too difficult of a hill to climb.”

The spotlight will be on Mike Smith after this game. Despite making 38 saves, he let a couple of soft goals go past him.

Kempe’s first goal midway through the second period fooled Smith, with a weak shot sneaking past him five-hole.

Minutes later, Andreas Athanasiou’s tally beat Smith while he was down on his stomach.

“We scored four tonight, that should be enough to win a game,” Woodcroft told reporters.

Troy Stecher also continued his role as an unlikely playoff contributor by scoring in his second straight game for LA early in the first period.

He also added an assist on the game-winner, giving him four points in just two playoff games for LA.

With the Kings getting an opportunity to clinch the series in Game 6, Woodcroft’s talked about the pressure being on them.

“We’re going there to win one game, they’re going to try and close this out.

The pressure’s on them, they’re the home team.”