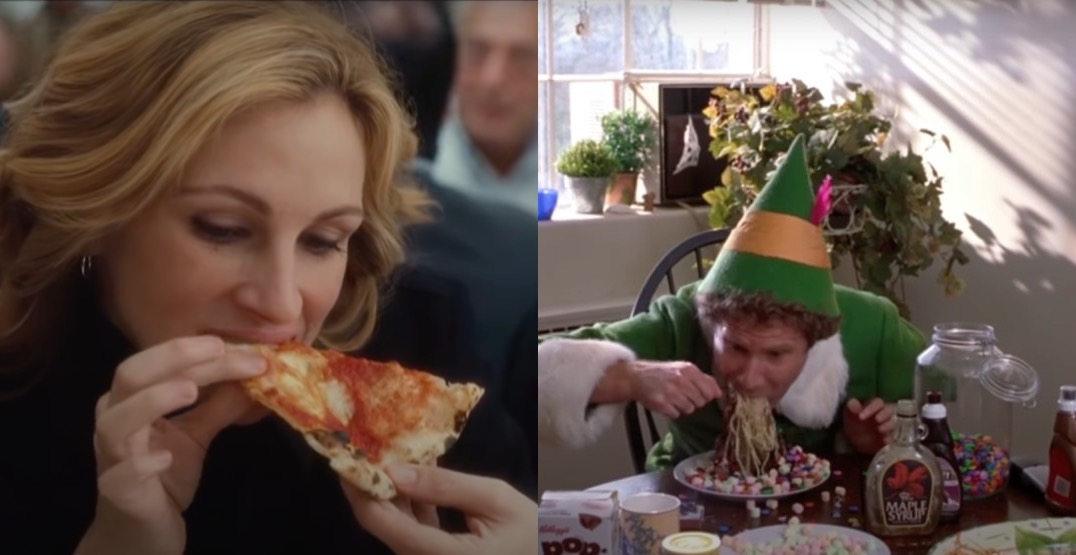 Whether it’s watching it being made, eaten, or even thrown, nothing will give you more of a craving than seeing delicious food in movies.

Movie sets are able to use experts, art design, cinematography, acting, editing, and more to capture the most mouth-watering food imaginable.

With clever writing, it’s also a chance to create something we’ve never even heard of before.

It got us thinking… what are some of the best food scenes in movies? Hannibal Lecter may have talked about serving his favourite dish with some fava beans and a nice chianti, but we’re hoping for something slightly less gruesome.

Here are some of the most iconic dishes from movies we wish we could try for ourselves.

With a name like Chef, there are bound to be a few excellent dishes to choose from. We could have gone with the pasta aglio e olio he makes for Scarlett Johanssen or the Cuban sandwiches they end up making from the renovated food truck, but it’s the care and camera work surrounding this simple sandwich that has us wishing someone would make it for us.

This really is one of the best things to watch if you’re in the mood for checking out some fantastic food in movies.

Chef Adam Jones is as talented as he is arrogant, which is why this pita filled with lamb marinated in a za’atar lemon zest and yogurt is so impressive. He tries it from a local street food chef and decides to give him the job right there on the spot.

“I made them extra sloppy!”

Even in this movie trying to make sloppy joes, and the person serving them out, is kind of scary, but we still can’t help wishing we could have some. You don’t see sloppy joes enough these days and we hope they make a comeback.

“I’ll have what she’s having.” What an iconic line.

Sally’s reaction really says more than we ever could.

Shoshanna is forced to sit with the evil Col. Hans Landa as he waits for the cream to add to the strudel in this scene. Once she tries it, even in this intense situation, she can’t hide her immense surprise at how good it tastes. Contrasted with the anguish she can finally let out once Landa leaves, it makes this one of the best food scenes in movie history.

Yes, the Seth-and-Jules-made Tiramisu is the focus of the scene, and we would love to try it, but Evan and Miroki had even more fun doing it and it looked perfect. We will take that one, please.

We’ll take that one.

Nothing sounds better on a down day than getting the gang together and cheering ourselves up with Orange Mocha Cappuccinos. Just skip the gasoline fight.

Welsh rabbit with a poached egg on top (not too runny), bacon, scones, butter, cream, jam (not strawberry), lapsing tea, and some sausages.

If we had somewhere we could place an order like that, we would.

No way to actually know if this is good or not, but it looked so tasty and fun watching it as kids, it’s impossible not to feel nostalgia cravings for it. Might be more fun to just throw it at each other though.

Probably the scene that truly revived the Old Fashioned into popularity again. And maybe record players as well. And cool white jackets. Anyways, the preparation of this classic cocktail makes us want one every single time. The drink looks so good it’s “like it’s photoshopped.”

In one of Adam Sandler’s first (and underrated) dramatic roles, he makes one of the best-looking sandwiches ever put to the silver screen.

This is an egg and cheese sandwich combined with a BLT. Doesn’t that sound perfect? The first bite into a carefully crafted sandwich might is one of life’s greatest simple pleasures.

Sandwiches are frequent food in movies, and this one is near the top for the best.

It’s tough to decipher everything that went into this spaghetti breakfast Bud the Elf makes, but it looks like maple, chocolate, and butterscotch syrup with marshmallows and chocolates on top. Then, he breaks a chocolate pop tart all over it and mixes it in with his hands.

It’s probably not very good but also maybe he’s on to something here.

Apparently, according to this underrated and delightfully charming rom-com, Fool’s Gold was the favourite sandwich of Elvis Presley.

Ah, the iconic lunchtime scene from The Breakfast Club.

Claire has sushi, John has nothing, Andrew has three sandwiches, a bag of chips, another small bag of something, a carton of some drink, an apple, and a banana, Brian has a PB and J with soup and apple juice, but it’s Allison that has the wildest one we want to try.

She pours a Pixy Stick over buttered bread and crushes Cap’n Crunch cereal into it. It sounds gross, but also is maybe kind of good. It’s definitely not part of a balanced meal.

Of all the food in movies we can think of, this is the only Michelin-calibre dish made by rats.

“I’m having a relationship with my pizza.”

This isn’t just any pizza scene, it’s everyone enjoying a full pie to themselves in Napoli, exactly how you’re supposed to do it. Fly us there right now, please.

“He had this wonderful system for doing the garlic. He used a razor and he used to slice it so thin it used to liquefy in the pan with just a little oil.”

Dinner was a very big thing in prison for these mobsters, making extravagant dinners with special care, enjoying it all with contraband bottles of Italian wine.

“You can never have too much butter.”

Any movie about making tons of recipes from the mind of the iconic Julia Child is going to have many iconic dishes featured, but we chose this one because we may actually be able to make it at home, which is exactly how she would have wanted it.