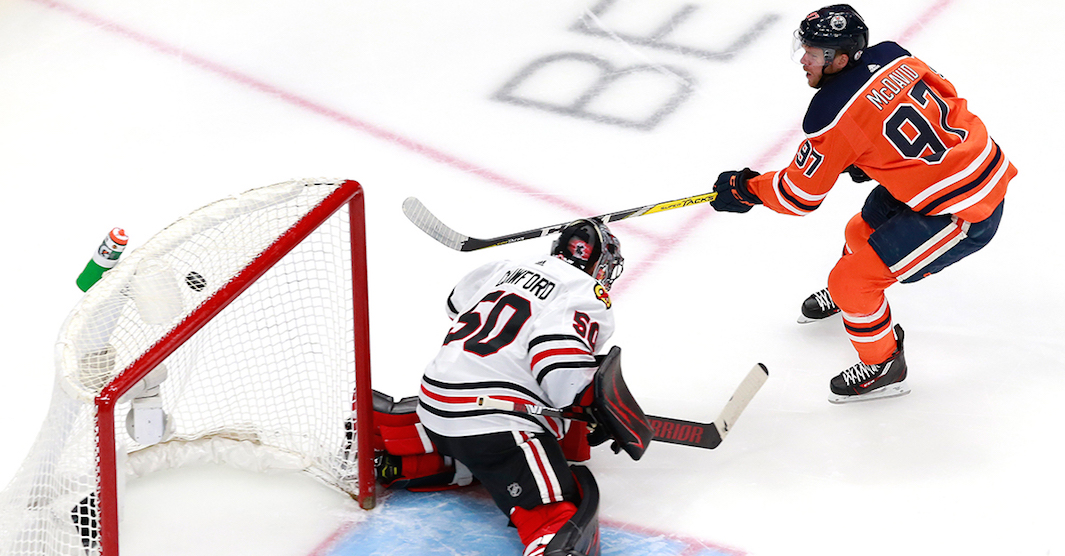 “We have to be better next game.”

Those were Connor McDavid’s words after a sloppy performance cost the Edmonton Oilers in Game 1 on Saturday, and he put those words into action himself, putting up a dominant performance in Game 2.

The Oilers captain set the tone early, and finished the game with a hat trick as the Oilers beat the Blackhawks 6-3 to even up the series at one game apiece.

McDavid’s first goal came just 19 seconds into the game when he picked up a loose puck in the slot and shelved it on Corey Crawford.

Less than four minutes later, McDavid struck again with the kind of goal that only McDavid could score, using his incredible speed to get around the defence and beat Crawford with a backhander.

McDavid’s third goal was a bit of a fortunate bounce when his pass to the front of the net bounced off Duncan Keith and in to give the Oilers a 4-3 lead late in the second period.

Send us vids of you throwing your hats at the TV pls. 😂

Edmonton having someone throw hats on the ice for Connor McDavid's hatty pic.twitter.com/kRLjUzQW79

“Those first two goals were really strong goals,” Dave Tippett said post-game of McDavid. “They sent a really strong message to our team that he’s here to play. But I liked the way our whole team responded.”

Heading into the third, the Oilers didn’t sit on their one-goal lead, and eventually put the game away with a pair of quick goals midway through the period.

James Neal got the insurance marker after stealing the puck from Crawford, and Alex Chiasson scored moments later to put the game out of reach.

Tyler Ennis scored the other goal for the Oilers, a shot from the point in the second period that beat a screened Crawford five-hole.

Ryan Nugent-Hopkins had a standout game, picking up three assists and five shots and led all Edmonton forwards with 21:03 of ice time.

McDavid and Nugent-Hopkins actually made Oilers history as the first players in franchise history to start a postseason with back-to-back three point games.

Andreas Athanasiou also had a strong performance. Despite not hitting the scoresheet, he was using his speed effectively to generate some quality chances.

It was a pretty quiet night for the Art Ross winner, as Leon Draisatl failed to record a shot in over twenty minutes of ice time.

After allowing three powerplay goals in Game 1, the penalty kill came up big for the Oilers on Monday, not allowing a goal on four opportunities.

This was a crucial win for the Oilers, as going down 2-0 in a five game series would’ve been a massive hole to climb out of.

From @Sportsnet Stats Department: Teams that take a 2-0 series lead in a best of 5 – win the series over 98% of the time. This is as close to an actual 'must-win' game as it gets for the #Oilers tonight vs the #Blackhawks #NHL #StanleyCup

Instead, the Oilers have evened up the series and will look to keep the momentum going in Game 3 on Wednesday.