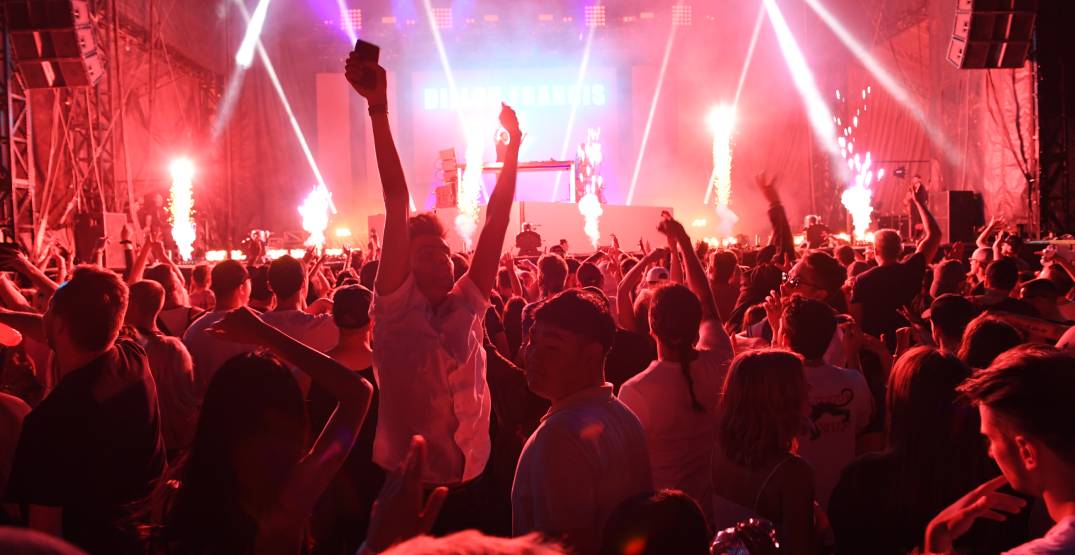 Some of the hottest contemporary talent from North America and the UK will rock the Bud Light Stage, Hall D at Edmonton Expo Centre during this year’s K-Days festival.

To celebrate the return of summer — and finally being able to attend live music festivals again — the 2022 K-Days festival will feature 10 action-packed days of music concerts, funfair rides and games, unique experiences, food and drink events, shopping, and more from July 22 to July 31. Ticket prices to these all ages concerts include admission to K-Days.

So, to get you extra excited for this year’s festival, we’ve rounded up the top pop, tropical house, neo-soul, R&B, and rap musicians you’ll be able to see on the main stage during the evening concert series.

Snakehips are a British electronic duo best known for their 2015 mega-hit “All My Friends” featuring Tinashe and Chance The Rapper which turned them into household names. The dynamic duo — consisting of Oliver Lee and James Carter — will bring their mix of high-energy club hits and universally relatable love songs.

New York rapper Bryce Vine — of “Drew Barrymore” fame — will also be joining the group for what promises to be an unforgettable performance. He recently made his major label debut with Carnival, which includes lyrically referencing his favourite sci-fi TV shows, 90s nostalgia, and commentary on growing up in LA, while effortlessly fusing the punk spirit of Blink-182 with homages to Tupac and Outkast.

Sabrina Claudio & Tinashe will take to the stage on Tuesday, July 26 at 8:15 pm.

Sabrina Claudio is a Miami native, known for her singles “Unravel Me,” “Don’t Let Me Down,” and “Belong To You.” She has just re-emerged from a pandemic hiatus with a new album Based on a Feeling. Claudio has performed on Jimmy Kimmel LIVE! and The Late Show with James Corden in addition to gracing the Coachella, Lollapalooza, Outside Lands, and Life Is Beautiful festivals.

Joining her on the Bud Light Stage is a singer-songwriter and actress Tinashe, known for hits such as “HMU for a good time.” Initially an actor and model, she made her commercial breakthrough in 2014 with “2 On,” a collaboration with producer DJ Mustard and guest rapper ScHoolboy Q. Most recently, she has issued the independent albums Songs for You (2019) and 333 (2021).

Acclaimed Chicago rapper Polo G is next to hit the Bud Light Stage on Friday, July 29 at 8:15 pm.

His debut 2018 album Die a Legend depicts eight friends and family members he lost to street violence and features singles like “Pop Out” and “Finer Things,” which were written during a stint in jail. He was nominated for Best New Artist and Best Hip Hop Video at the 2021 MTV Video Music Awards, and for Favourite Male Hip Hop Artist and Favourite Hip Hop Song at the 2021 American Music Awards.

His set will feature PGF Nuk — who’s known for hit song “Waddup,” which has been streamed over a million times on Spotify — and Kill Jasper, the 21-year-old, Compton-born rapper who has over a million streams on Apple Music alone.

Toronto singer-songwriter Jessie Reyez will perform on Saturday, July 30 at 8:15 pm, featuring special guests badbadnotgood — a Canadian jazz band known for “Running Away,” their song which went viral on TikTok — and Preston Pablo. The latter of the special guests is for channelling a fresh perspective on R&B and pop through live instrumentation and eloquent songwriting.

Reyez stormed onto the music scene in 2016 with the triple-platinum hit single “Figures” and has collaborated with artists like Calvin Harris, Dua Lipa, and Eminem.

“We are very excited to host this diverse lineup of artists joining us for K-Days,” said Harrison Chu, talent buyer for F7 Entertainment Group in a press release. “My hope was to be able to bring a variety of different genres into play alongside the return of K-Days for summer 2022.”

Arlindo Gomes, VP of business development and venue management at Explore Edmonton — which is hosting the event for the first time this year — said the lineup has been chosen to give Edmontonians “exceptional experiences.”

“K-Days has always been about our community and we’re excited to partner with local companies to deliver exceptional experiences,” he said in a press release. “This is an example of how we can harness local expertise from world-class concert promoters, F7 Entertainment Group and Boodang to help welcome the return of this iconic event.”

Check out the K-Days website to find out more and to purchase tickets.