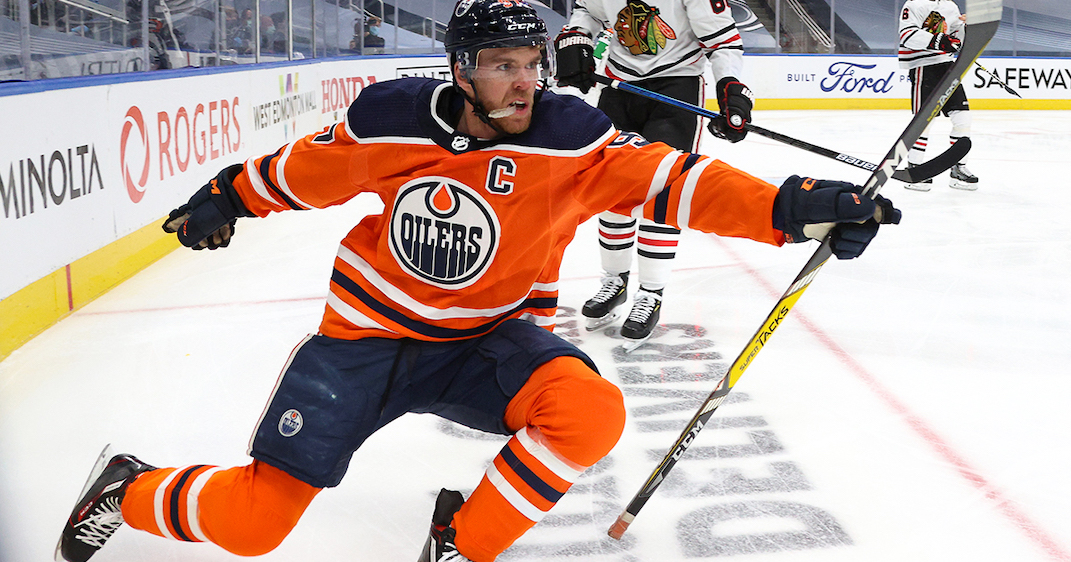 It took Connor McDavid just 19 seconds to put his stamp on Game 2 of the NHL’s qualifying round against the Chicago Blackhawks Sunday night, finding an open space in front of the net and batting home a bouncing puck past Hawks goaltender Corey Crawford. A short but loud celebration from the Oilers captain followed, as did two more goals, one a spectacular breakaway where he juggled the puck to himself before roofing a backhand as Edmonton evened the best-of-five series with a 6-3 victory.

It was a look on McDavid’s face that Kris Knoblauch has seen before. Knoblauch who is currently the head coach of the AHL’s Hartford Wolfpack, held the same job in Erie where McDavid suited up in the Ontario Hockey League for the Otters.

“He’s a very intense individual, he wants to win, he wants to perform at his best every night, you could see it after he scored that goal.”

McDavid’s third goal proved to be the game-winner on a power play where his pass deflected twice on the way to the net and past Crawford. It looked like a pass anyway, but I wouldn’t put it past McDavid that he actually called his shot before releasing the puck. He’s that good.

“You’re gonna see something from him that you haven’t seen from somebody else and you’re going to see it on a regular basis,” Knoblauch said remembering McDavid’s final year in junior as a 17-year-old. “He would always do these things I never anticipated, I never saw another player score a goal a certain way and he just seems to pull these things off over and over again.”

As electrifying as he is on the ice, he’s equally quiet and guarded off the ice and his critics love to pounce on him when he doesn’t give them the answer they were hoping for. After Game 1, Denver-based writer Adrian Dater sent out this tweet.

It’s a most ridiculous tweet, that seems to have been deleted and was likely just clickbait.

“I couldn’t disagree with that anymore,” said a shocked Knoblauch. “You ask his current teammates, his past teammates, they were inspired by Connor and I know everyone would say ‘yes he inspired me’ because of his work ethic and his character”

The fact is nobody in the media has been around Connor McDavid when the cameras aren’t rolling and certainly a reporter who just flew into Edmonton has no idea what McDavid is like then. As for his blandness, not all hockey players have the personality of Alex Ovechkin, in fact I’d say 95% don’t. At least publicly. Look at every generational player since 1980 and compare their personalities. Wayne Gretzky, Mario Lemieux, Sidney Crosby, they were/are all quiet. Even Lemieux, the most outspoken of the three, waited eight years before calling the NHL a ‘Garage League’ in 1992 over the clutch and grab style of play at the time.

Number 97 is a rare generational player, but he’s more than that. He’s a generational brand. He’s calculated with what he says most of the time, never takes shots at referees and is very protective of his image. He is capable of joking — he said recently he was sure the players would get it right, but wasn’t sure of the media when voting on the Ted Lindsay and Hart Trophies respectively of which his teammate Leon Draisaitl is nominated for. Most of the time though he is all business.

Asked about hats being thrown on the ice Sunday night by NHL staff in the bubble, his post-game response was deadpanned.

“I think the hats were unnecessary, I’d rather we just get playing again.”

His former coach says he’s always aware of the spotlight on him, and of those looking to trip up the fastest player in the league.

“So often people are trying to judge him and try and catch him in a moment of weakness or whatever. Just from a few seconds they get an impression of him, so I think that’s where being guarded comes from.”

But don’t let McDavid’s post-game persona fool you, away from the media Knoblauch says things are different.

“It was nice to see sometimes as a coach you go through the dressing room or when we’re on the road to see him goofing off or being one of the boys. There’s certainly a different side of Connor when he’s around his teammates.”

As for the rest of the playoffs, his junior coach is expecting big things.

“I know he can absolutely carry a team, it’s a lot harder in the NHL than it is in junior but his last year in junior we played an outstanding team in the Sault St. Marie Greyhounds in the semi-finals and in six games he set the team-record for points. He was able to carry our team and win that series.”

In Game 1 McDavid opened the scoring and when the game ended had four points. One was taken away post-game. Hopefully it wasn’t deducted because of personality, like in a beauty pageant.