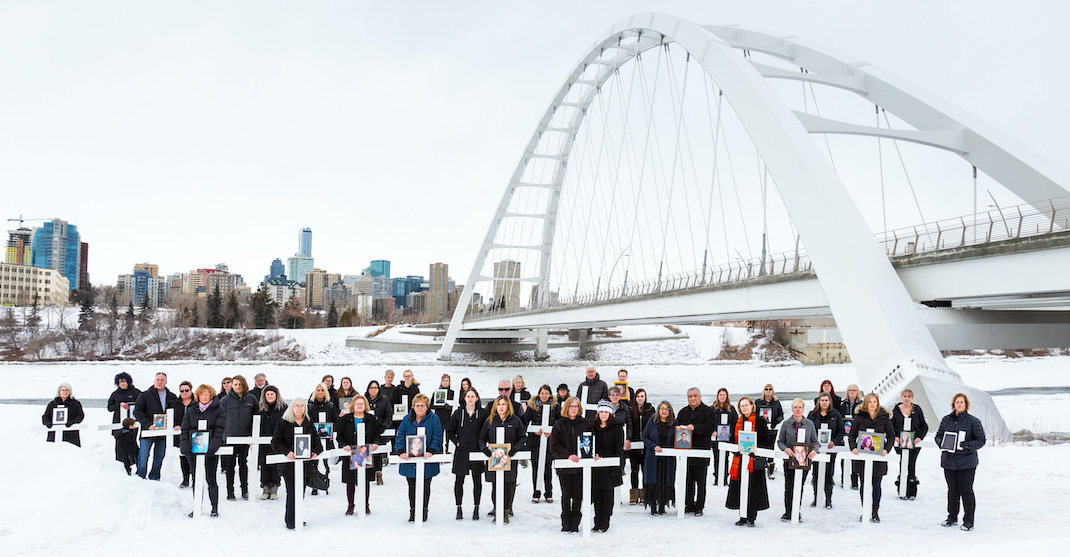 Families from across the Edmonton region gathered at the banks of the Fort Saskatchewan River to remember loved ones they lost due to substance abuse.

The group that organized the memorial, Moms Stop the Harm, are urging government action to prevent further loss of life.

“Families from Frog Lake, Claresholm, Marwayne, Lone Butte BC (with Edmonton family ties) and the Edmonton region gathered at the banks of the North Saskatchewan River to remember loved ones lost to substance use related causes,” said a release from the group.

“While overdose deaths account for most of the tragic losses, we often forget that families mourn loved ones to other causes, such as infections and blood born diseases caused by lack of access to sterile supplies, and to suicide related to substance use and mental health challenges, as it the case with two of our Edmonton families in this photo.”

The group took photos during the emotional gathering, holding crosses with images of their lost loved ones.

“A son, a daughter, brother or sister, a parent. Many held crosses, eagle feathers, candles or other mementos to honour and remember their loved one,” said the release.

“In Alberta two people per day continue to die, while life saving public health services, like Supervised Consumption Services, are under review in Alberta and their future is uncertain as we the announcement of the final findings of the review and their fate by our provincial government.”

The Government of Alberta is currently having a panel review the supervised consumption sites to examine the impacts the sites have on communities and subsequently submit a report for consideration during future policy decisions about the sites and the addiction care system.

At a press conference in Calgary in January, Premier Jason Kenney commented on the report which he hopes will be released in the “next couple of weeks.”

“It underscores the concerns that we have had about the negative impact on people, and on communities as a result of at least some of these drug injection sites,” said Kenney.

“I think we see everywhere a market increase in crime in the area of those sites and social disorder and negative human consequences in many ways.”

Kenney said that it would be possible some will be relocated, and some completely abolished, but did not specify a timeline.

The group behind the memorial says that the governments’ response has been lacking.

“For us as families, this is unacceptable, as deaths from substance use are preventable and our loved ones deserve to live,” said the release.