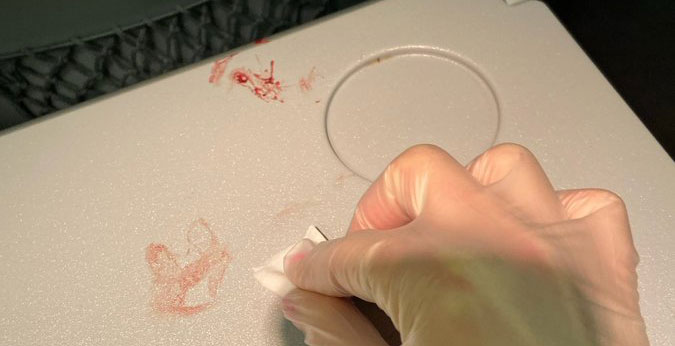 When an Edmonton woman found blood on her tray table aboard a Flair Airlines plane, she says flight attendants handed her gloves and wet wipes to clean it herself.

Jessica Starcheski tweeted about her experience Sunday, saying “fly [Flair Airlines] and get to clean someone else’s blood yourself, for free!”

Fly @FlairAirlines and get to clean someone else’s blood yourself, for free!

After alerting the flight attendant of the blood on my seat and table, they gave me the gloves and wet wipes to clean it. #yeg pic.twitter.com/gVUy0sGPY5

In a statement to Daily Hive, Flair spokesperson Raelene Coffey apologized about the incident, saying it was due to “an oversight during our typical sanitation procedures and a miscommunication between flight attendants.”

Starcheski followed up her original tweet to add that a Flair representative met her when she returned to Edmonton to hear her concerns.

I said that I just wanted to make sure that bodily fluids were cleaned properly in the future, and she told the processes they have in place. I appreciate their response time to this situation. I tweeted it because I think it would have gotten lost in the customer service emails.

Coffey added the airline is reviewing its procedures to prevent a similar incident from happening again.