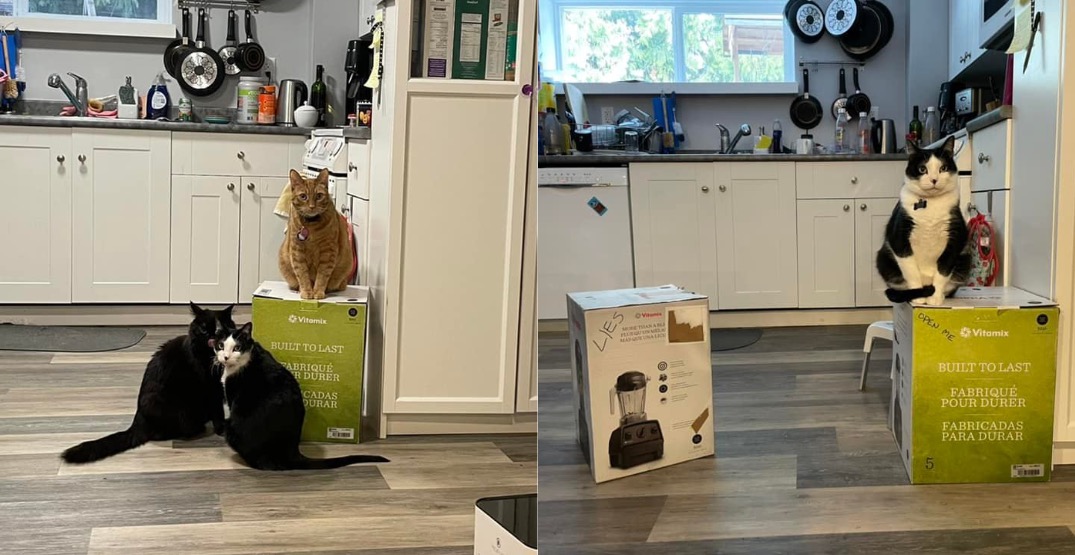 The arrival of a Vitamix blender to a Vancouver Island couple’s home in mid-December has created a stand-off between themselves and their cats of epic proportions.

Jessica and Nikii Gerson-Neeves cats, Max (“the sentient soccer ball”) George: Destroyer of Worlds (“sentient potato”), and Lando Calrissian (“the questionably sentient dust bunny”), spotted the blender box the moment it entered their home and have demanded taking turns perched atop it.

The saga is now chronicled on a Facebook page, garnering 17,000 followers.

Since then, the cats have refused to leave the box, fighting over who gets to perch themself on it, taking turns standing guard. The blender has remained trapped in its box ever since.

Things got so desperate for the couple that on January 2, they reached out to Vitamix Canada for help.

“We write to you because it has become clear at this point that without herculean intervention, we’re never going to get to use the new blender we’ve been longing for, for years,” Jessica wrote. “Despite what many people have suggested, we aren’t writing to request additional Vitamixes—that would be ridiculous, and while we’re definitely ridiculous, we’re not quite that ridiculous.”

They asked the company for three empty product boxes, as “cardboard boxes seem to lack the appeal of the Vitamix box,” she added.

A twist came on January 3, when the pair came home with some Christmas gifts, including a Cuisinart ice cream maker.

After setting that box down briefly, Max, the sentient soccer ball, proceeded to jump on that box.

Additional posts reveal that no matter how many boxes the couple tries to give the cats, they always seem to gravitate to the Vitamix blender box.

The updates on the hostage situation regularly receive hundreds of likes, with some grabbing thousands.

The story has been picked up by news outlets around the globe, including landing in the Washington Post and the Miami Herald.

Updates are still being provided on the couple’s Facebook page dedicated to the stand-off between the cats and their everlasting circulation between the boxes.

Many of the comments on the posts express the need for something bright as 2022 drags on under the blanket of the COVID-19 pandemic. And these kitty cats are doing the trick.