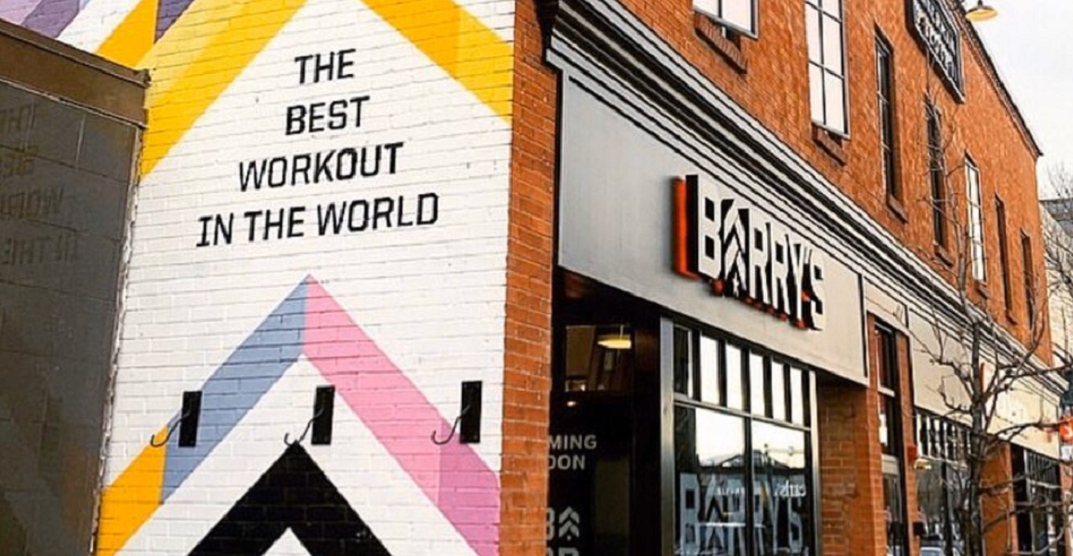 The first YYC location opened in late November and is located right beside (and is, in fact, attached to) the new lululemon on 4th Street SW.

The very first boutique workout studio to popularize the now wildly popular lights-off-music-up, 60-minutes-of-sweat formula (opening way back in 1998!), I was more than eager to accept the invitation to a pre-opening media class led by Barry’s Bootcamp CEO Joey Gonzalez himself.

When you first walk in through the doors of Barry’s, it actually seems a little more like a smoothie bar than a workout studio. On the ground floor — and adjacent to the stunning new 4,800-sq-ft lululemon — is the fuel bar, which offers pre- or post-class nutrition in the form of a wide variety of flavours.

And that’s…pretty much it. You can walk through an opening in the wall to check out what lulu has to offer, but the section of the ground level portioned off for Barry’s makes you start to wonder where exactly the change rooms, studio, and all that could possibly even be.

…Until you realize that there are some stairs leading downwards and lit under a neon arrow.

It’s no wonder that Gonzalez described the studio as akin to a speakeasy during a post-class interview — it’s not that there’s a smoky haze, dim lighting, or bootleg liquor once you reach the somewhat secret basement level, but that feeling of discovery, of “how is all of this down here???” is at the forefront when you walk into the change room and apparel section.

White walls keep things light, and while the studio is down yet another flight of stairs, the entire area is wide open, so you never feel like you’re stuck in some basement.

The change rooms are spacious and provide everything needed for a post-workout refresh, and the apparel section gives early-comers something to browse before class gets underway.

Having never experienced any sort of bootcamp workout, I was curious walking into the infamous Red Room at Barry’s. The red-tinted lights are dim, mirrors cover both walls, and a row of treadmills flank a series of step platforms on the floor.

Attendees take their positions, the music turns on, and the sound of the instructor’s voice cuts through the steady beat courtesy of a mic.

Here’s how it all works (or at least, how my class worked): You start either on a treadmill or at a platform with weights. After a short warm up, the instructor will start telling you generally how fast you should be setting your running speed (their treadmills have an easy button interface to simply click 1 through 12) or what sort of squatting, lunging, lifting, or crunching you’ll be doing on the floor.

No one speed/exercise ever lasts for much more than 90 to 120 seconds, tops, before paces are changed or lifts are switched.

As someone who primarily attends spin classes, it was honestly quite impressive to hear the instructor juggling the two groups so seamlessly, leaving the runners to run while telling the platformers what to do next, and vice-versa. 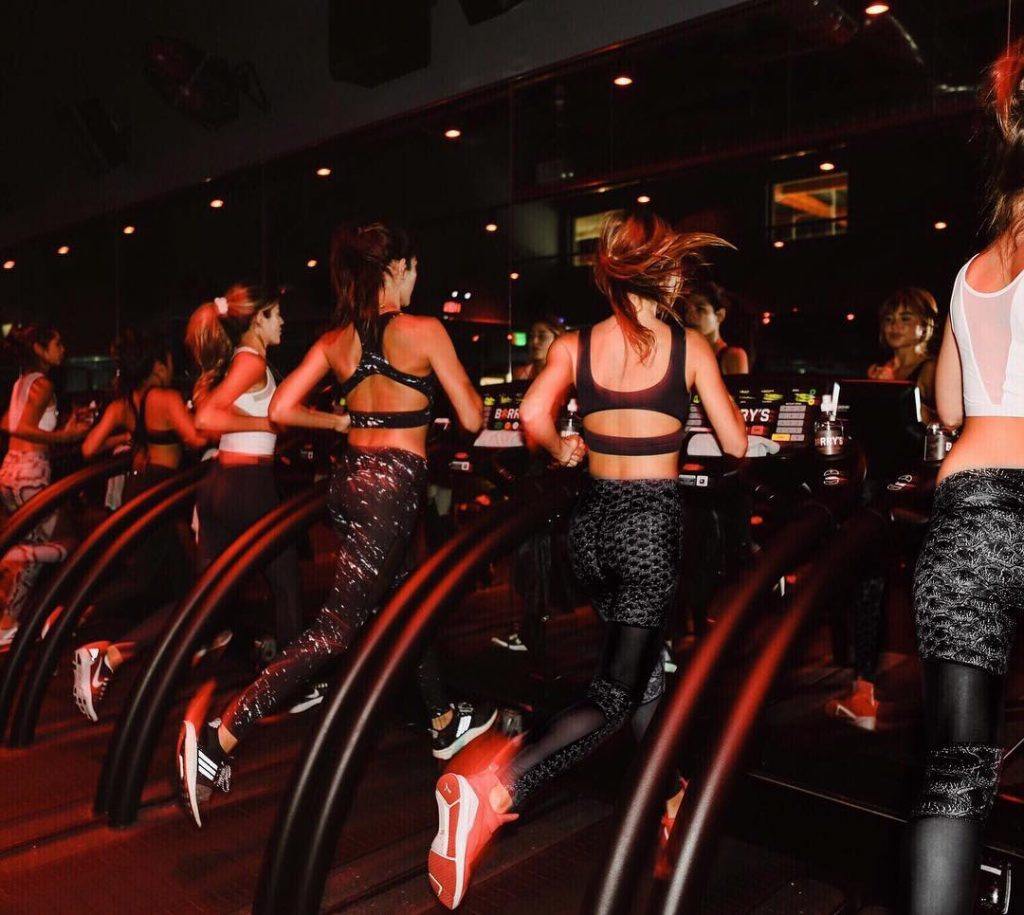 Before you know it you’ve switched back to the treadmill, and just when you start getting tired of running, you’re back on the platforms, and, wait, this is the last cycle? 10 minutes to go? Better make it a good one.

As with all class-based studios, the workout is only heightened by the almost-subconscious group mentality of working, running, or lifting together. There may even be a little sense of competitiveness thrown in there too as extra motivation…if you’re anything like me.

Sure, you can run on the treadmill, lift some weights, and do a few planks at any old gym, but for those of us who don’t have a will power of steel, being told what to do, how to do it, and for exactly how long — all while being socially obligated not to leave for the full 60 minutes — makes for an amazing way of getting a good workout in.

And it is a good workout. I can’t say that I’ve tried every single workout in the world (though I’m currently working my way through the ones in Calgary), so the title of “Best Workout in the World” can’t be officially confirmed by me quite yet, but it was definitely better than any workout I’ve had when left to my own devices over at Repsol’s. 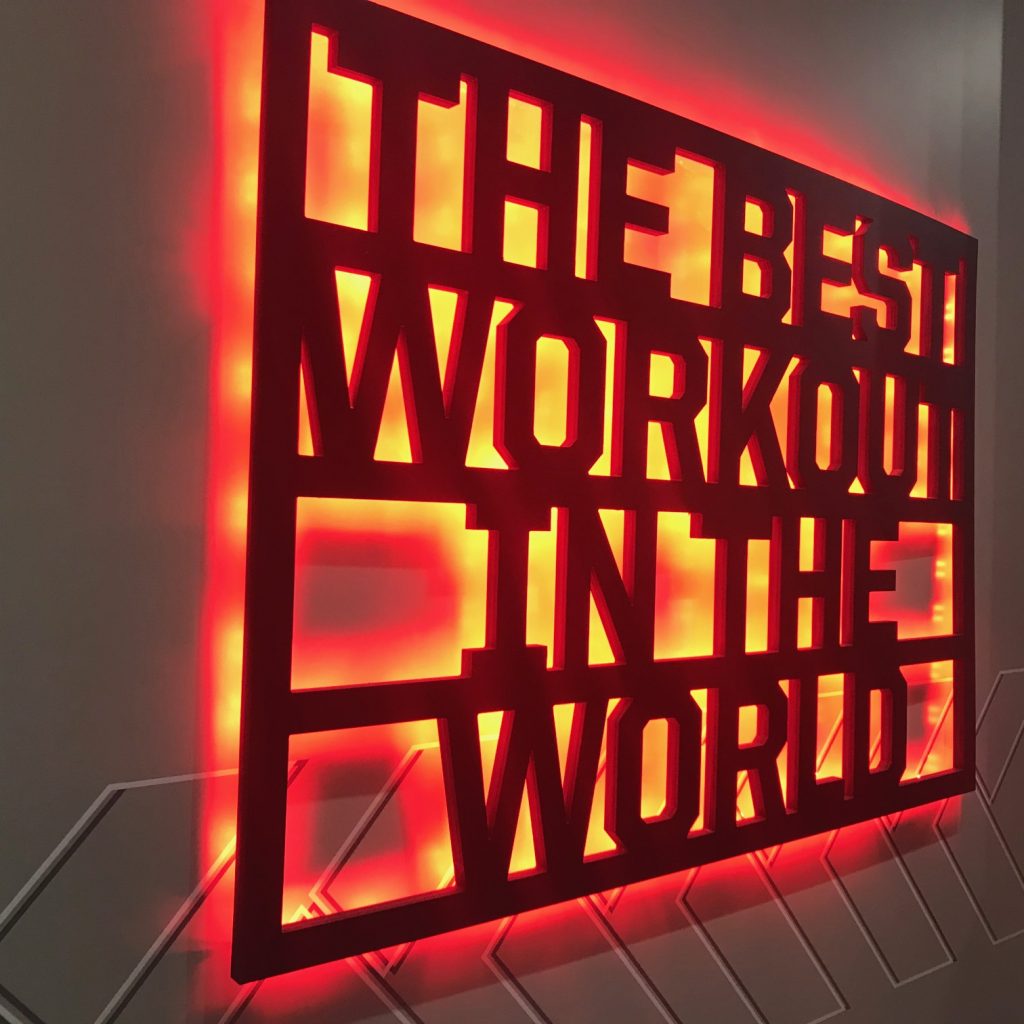 I’m a bit more of a cardio-over-weights kind of guy, but that’s not really something that instructors at Barry’s take into consideration when they’re choosing what move to make you do next.

Given that I haven’t squatted in who knows how long (or, really, done any sort of ab workout to speak of), it wasn’t surprising that I was feeling sore in muscles I forgot I had within just a few minutes after getting out of the studio.

There’s no denying that a Barry’s Bootcamp class is, in fact, a full-body workout, mixing high-intensity cardio on the treadmills with targeted weight training on the platforms.

A post-class smoothie courtesy of the fuel-bar is a definite highlight and incredibly convenient given that you walk by the upstairs bar on your way out the door. You can also order it before the class so that it’s all ready for you when you walk out of the Red Room. The smoothies might tack a little something onto the total bill, but money spent on personal health is money well spent, right?

All-in-all, Barry’s Bootcamp is definitely worth checking out if you’ve never been — especially for those curious about just how they managed to fit a fitness studio underneath the new lululemon, because it truly is quite the sight to see.