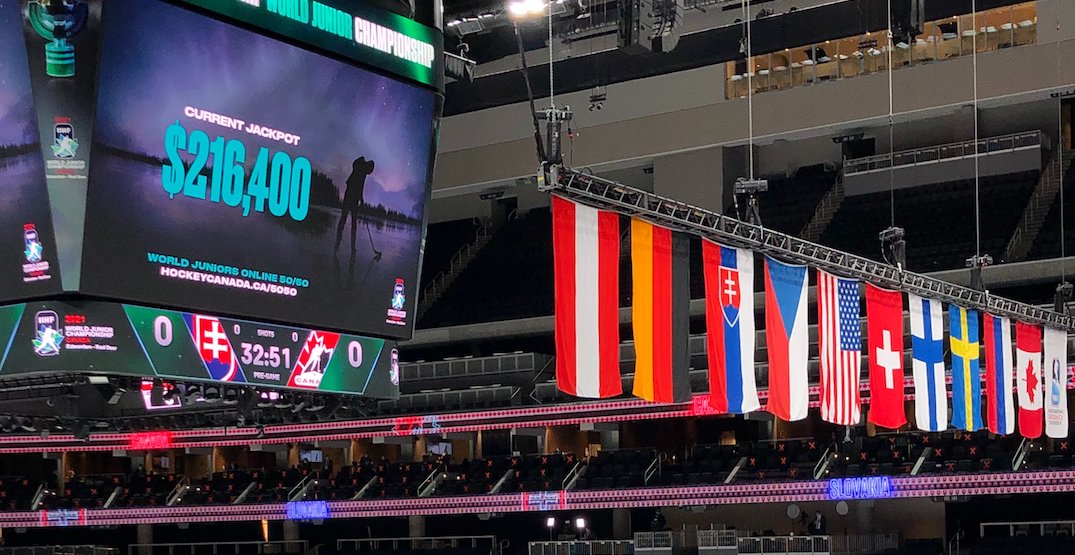 If there’s one thing for certain at the 2021 World Junior Championship, it’s that Albertan hockey fans really love the 50/50.

There are no fans in the building at this year’s tournament in Edmonton of course, so the 50/50 has moved online for the first time in World Juniors history.

The tournament isn’t even halfway done yet, but the online 50/50 is already a smash hit, with combined jackpots totalling over $2.37 million. On days that Canada plays, the average jackpot has surged to over half a million dollars.

Here’s a look at the daily jackpots so far:

Canada’s New Year’s Eve game against Finland will decide first place in Group A, and then the knockout round begins, so the tournament’s just starting to heat up.

Hockey Canada has announced that the 50/50 jackpot will start at $500,000, meaning the total could end up well over half a million dollars.

“As fans across the country continue to enjoy the annual holiday tradition of the World Juniors from the comfort of their homes, we are excited that the 50/50 draw on New Year’s Eve is guaranteed to be the largest jackpot to date for fans in Alberta,” said Riley Wiwchar, executive director of the 2021 IIHF World Junior Championship.

Tickets are sold online for people in Alberta through the Hockey Canada website during every game day from 9 am to 10 pm MT for the following amounts:

Gross sales from the 50/50 program are split between the winning ticket holder and the Hockey Alberta Foundation. The Hockey Alberta Foundation is a not-for-profit charitable organization with a mission to “improve the quality of life of Albertans through hockey with a vision to support the hockey community in Alberta by celebrating those before them, investing in those who lead them and contributing to those who need them.”