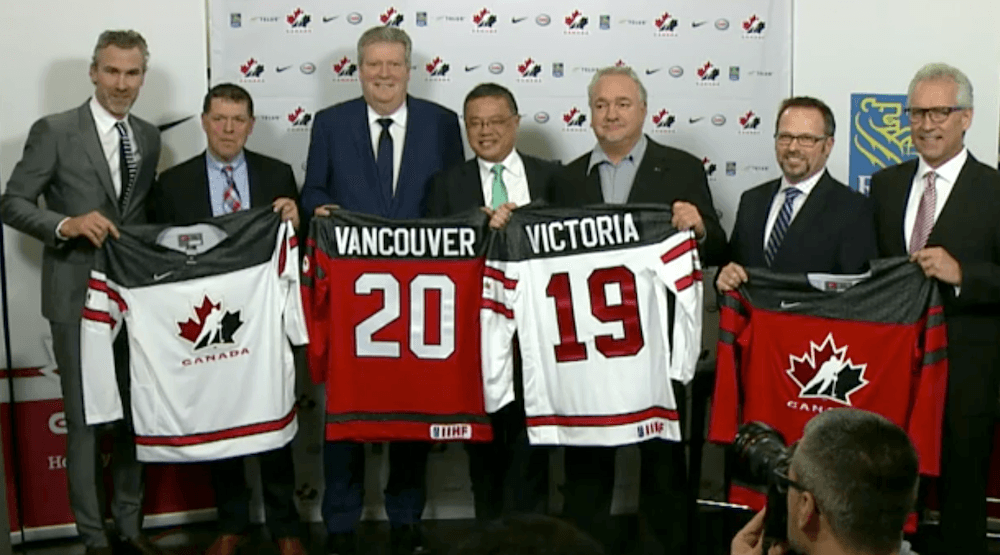 The World Juniors are coming back to BC, as Hockey Canada announced on Thursday that Vancouver and Victoria will host the 2019 IIHF World U20 Championship, beginning in December 2018.

This is a move that has been rumoured for some time. With Canada having already been awarded the 2019 World Juniors, all that was left was to pick a host city.

The bid process for the tournament opened last April with a call by Hockey Canada for communities to submit their intent to bid. Vancouver Giants owner Ron Toigo said back in May that he, in conjunction with the Vancouver Canucks, were looking to secure the 2019 tournament.

“The host committee is thrilled to bring back the highest level of junior hockey to the province and, specifically, the cities of Vancouver and Victoria,” said Toigo, co-chair of the tournament host committee. “We appreciate the support of Premier Clark and the bid committee who collectively put forth a presentation to Hockey Canada that was successful in bringing this event back to the British Columbia.”

The Vancouver Giants have already announced that as was the case in 2006, Giants season ticket holders will be among those who get first priority for tickets.

Since the 2006 tournament, Canada has hosted the World Juniors on four occasions (2009 in Ottawa, 2010 in Saskatoon/Regina, 2012 in Calgary/Edmonton, 2015 in Montreal/Toronto), with a fifth beginning on Boxing Day once again in Montreal/Toronto.