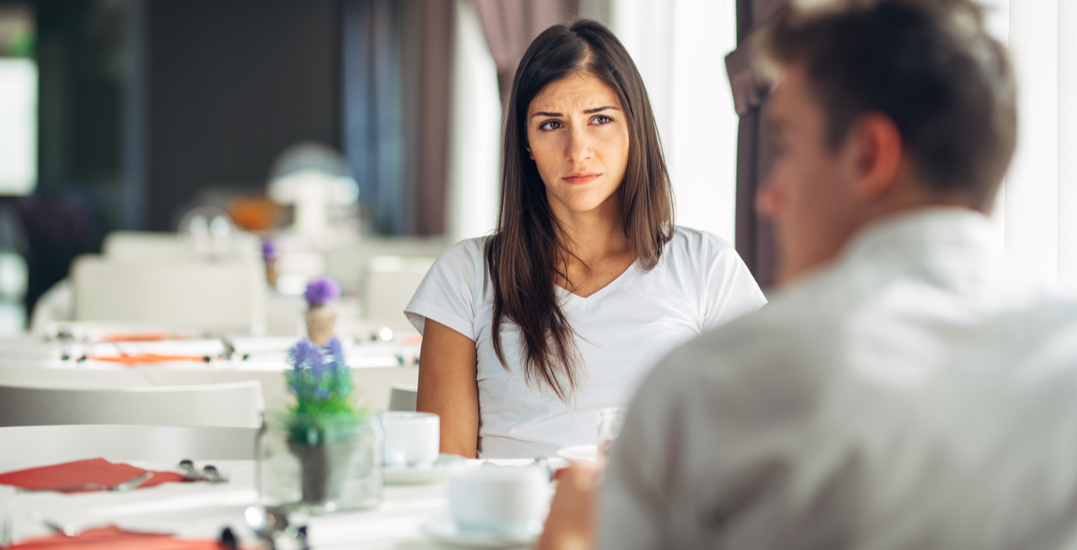 I dislike Valentine’s Day so much that I find myself accidentally calling it Halloween without even realizing. I guess my subconscious has a bit of a sense of humour.

So, in the spirit of the most romantic day of the year, I feel like I’d be doing everyone a disservice by not recounting the worst date I’ve ever been on. I could lie and say it would be painful to relive the experience, but honestly, it cracks me up thinking about just how ridiculous it was.

Let me start this off by saying that, at the time, I hadn’t been on many dates, as I was very recently single after getting out of an almost decade-long relationship. However, I can still acknowledge that this date was definitely odd, and I could tell it wasn’t something even a serial dater comes across all too often.

As I cruised comfortably into 30, I decided to go on more dates and potentially meet the elusive “one” that everyone keeps talking about. I had set up a date from Hinge with an exotic Irish man who was a few years older than me. I figured that he would have a charming accent and be more likely to actually want a committed relationship as he was nearing his mid-thirties.

He asked me out over the app and suggested we grab dinner. Naturally I declined, because there is no greater nightmare for me than being stuck sitting through an entire meal with a stranger.

My counter-offer: To walk along the water. Simple, and it adds the possibility of hopping into a waterside pub for a drink if the conversation is going well. He agreed to the plan, and we picked a day that worked well for both of us.

When the day of the date actually came, we hadn’t set a time to meet, and when the text came in it was him letting me know that he had a haircut scheduled downtown and would come to meet me after. Still, no official time had been set. I got ready and lounged around my apartment waiting for his “all ready to go” text, and when it came, I was confused and quite surprised.

“How long are you going to make me wait?”

I stared at my phone for a few moments trying to decipher if I missed something or if he was really bad at making jokes.

“I don’t understand?” is all I could think to respond.

Turns out he was waiting in the park for me, but never actually told me he was on his way or gave me a time to meet. I guess this probably should have been a giant red flag, but I instead just felt bad and rushed to meet him at the park, assuming that our texts weren’t going through or there was some similarly understandable miscommunication.

When we met he didn’t hug me and say hello, which seems to me to be a pretty customary greeting for dates.

Instead, he came in hot and immediately started accusing me of not being able to read texts. Naturally, I got defensive, whipped out my phone, and showed him that at absolutely no point was there an official time set. He looked confused at my messages and then pulled out his own phone, scrolled for a little, then grinned.

“I was only being cheeky.”

It took every ounce of strength in me not to openly eye-roll or call him out for not sending the message that he clearly thought he had.

He suggested we start walking, and I’ll be honest, at this point I was considering cutting my losses and heading home, but this stupid voice in the back of my head told me I should just walk with him and give him one more shot. So I walked, following his lead.

I am a very social person. I love to talk and share experiences with other people, but with this dude, I literally could not get a single word in. He was answering questions I wasn’t even asking, and talking about the most inappropriate first date topics. His favourite topic to discuss? His ex-girlfriend.

I spent most of the time he was talking trying to figure out how I was going to end the date.

As we walked, we approached a pub and he said, “Let’s grab a quick pint.” It wasn’t a question, it was a statement, which irritated me more. However, once again, I went with it.

Even though I’m 30, I always get ID’d at bars. I am completely used to it and have accepted that I have a bit of a baby face, so I was not surprised when the server asks to see my ID.

However, I was surprised at how my delightful date reacted. He snapped at the server, asking why she didn’t ID him, and when she sheepishly said that he looks over 25, he got even more worked up, acting like she was accusing him of going on dates with underage girls. Honestly, I hope she spits in his drink, I remember thinking.

Once we both got our beers, he stopped the server to say he wanted to order some food. He gets a burger and yam fries, and then after he handed his menu back to the server, he turned to me and asked, “You’ll eat some yam fries, right?”

I shook my head and said, “I’m really not hungry, but thanks for the offer,” feeling annoyed that he ordered food, meaning that I’m now stuck here for longer.

The conversation was painful, and this guy was finding more and more reasons to touch me while he continued to talk, without asking me a single question about myself. Thankfully his food showed up, and I was glad that it managed to shut him up for a little while.

At this point, I was enjoying the silence, and the conversation started moving a bit slower. Then he said, verbatim, “I really don’t like it when women can’t keep the conversation going.” His mouth was completely full of burger at this point, and he was acting like I was annoying him for not talking more.

Before I had a chance to respond, he picked up a yam fry off his plate and, no word of a lie, tried to feed it to me. I don’t think it needs to be said that feeding someone on a first date is, obviously, super weird — especially since I’d already told him I wasn’t hungry and that I wasn’t going to eat any of his food.

I shook my head and said no thanks. He persisted and moved the fry closer to my mouth. I continued to shake my head, while moving away from the impending yam fry, assuming he would get the hint and stop.

As he continued to try to feed me this yam fry, I felt like a baby with a parent trying to force-feed them peas. My mouth was tightly closed and he was pushing the yam fry into my mouth, making it mush.

I finally snapped: “Can you fuck off?”

He burst out laughing and dropped the mushy fry like it was some big joke.

Then he leaned in really close to me (I backed up, trying to get away), and he said, right after the yam fry fiasco, “Hypothetically, if we have sex later, you’ll let me feed you other things, right?”

That was the last straw for me, I was officially done with this date.

My response to that super uncomfortable advance was right to the point: “Probably not,” in my most annoyed tone possible.

He laughed again, saying, “Ahhhh, I am just playing.”

I made some excuse about needing to go and ask the server for the bill when she comes around next. He insisted on paying the bill, and I let him, figuring I deserved the beer for all the pain and suffering I’d endured.

When we left, he said he was going to walk me home. This time I didn’t go with it.

“No, that’s okay, I’m fine,” which turned into a battle of him insisting and me saying I am fine and that I don’t need an escort home. Inevitably, he wins, and we start the journey back in the direction of my apartment. As much as I didn’t want him to know where I lived, I had a concierge and decent building security, so I went with it just to shut him up and end the date ASAP.

When we finally reached my apartment, he went in to hug me goodbye. I hesitated for a moment but, feeling guilty leaving him awkwardly hanging, I went in to return the hug. He aggressively leaned in to kiss me as soon as our bodies got close, and swerved my head, just missing his lips, so he planted a kiss somewhere between my jaw and my ear.

I headed inside without another look back at this guy, knowing I’d never see him again. The entire elevator ride up to my floor was just me staring at the wall, trying to process everything that had just happened. Once I reached my floor, my phone must have just re-entered cell service because it started vibrating like crazy; six texts in just one elevator ride.

Naturally, they were all from this guy. He was curious why I didn’t invite him up, and he was still downstairs if I changed my mind.

Then he asked me out for date number two.

I stared at my phone, completely shocked at how he has perceived our date, because there was literally no way that any person could have honestly thought that this date went well. Instead, I typed a text letting him know that I didn’t think we were a good match and I wasn’t interested in a second date. Honestly, the text was way more empathetic than what he deserved.

His response: “Give me one reason why.”

I was floored by his response, completely taken aback by how oblivious he was. For the first time in my life, I made the decision to just straight-up block someone, and damn did it ever feel good.

I may not have met the elusive one that day, but I at least got a great horror story to tell at parties.