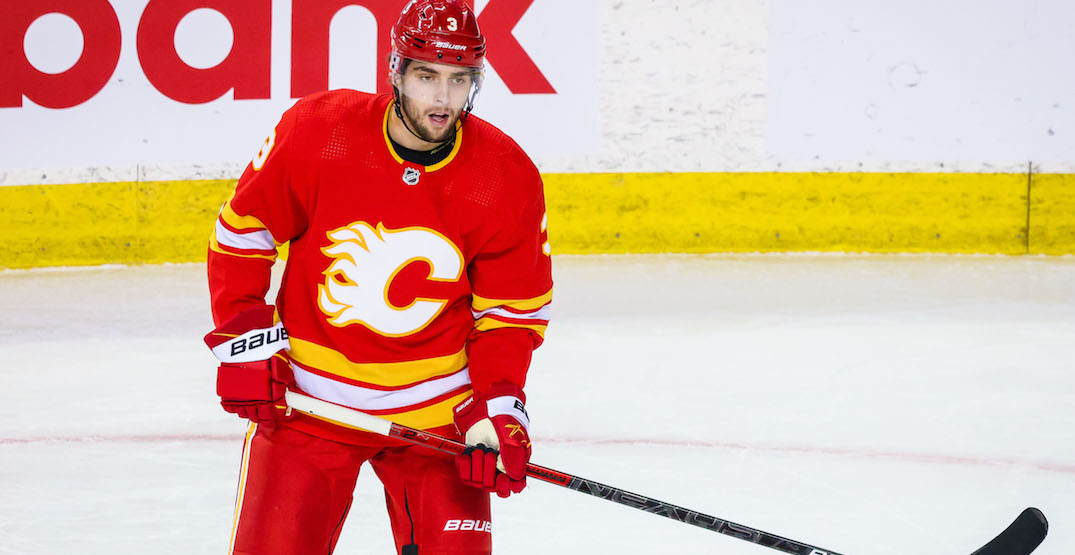 After a spring and summer without playoff hockey, Calgary Flames general manager Brad Treliving went out to improve his club this off-season — seemingly with a to-do list from head coach Darryl Sutter.

That said, there are a few players that stand to gain a lot with a strong training camp, and could perhaps earn a surprise spot on the team. Here are six lesser-known Flames players to keep your eye on this week.

Sometimes college signings don’t quite work out, as the Flames have seen in recent years with the likes of Josh Healey and Kenney Morrison. But so far Connor Mackey, a highly-touted signing from the NCAA in the spring of 2020, has bucked that trend.

A product of the University of Minnesota – Mankato, this left shot defender has followed up a strong collegiate career with a superb introduction to pro hockey. In 2020-21, he was named an AHL divisional all-star, won a bronze medal with the United States at the World Championships, and played six games in the NHL with the Flames.

The Flames added some veteran depth defenders in the off-season, but a strong camp from Mackey would cement his status as their first call-up.

Calgary’s first round pick in 2019, Jakob Pelletier is a Darryl Sutter style player in everything but size. Listed at 5-foot-10 and 170 pounds, Pelletier is a versatile forward who’s going pro after four very productive seasons in the QMJHL split between Moncton and Val-d’Or.

Pelletier’s a coach’s dream on paper: a captain on two QMJHL clubs, a two-way player who can generate offence or shut down the opposition, and a player with big-game experience from the World Juniors. The big question is if he can adjust to the size and speed of pro hockey quickly, or if he’ll need some time to percolate at the AHL level.

A fourth round pick in 2018, Martin Pospisil transitioned to the AHL in 2019-20. The Flames have had a challenge in recent years: their big players aren’t particularly skilled and their skilled players aren’t particularly big, so the 6-foot-2, 180-pound Slovakian winger is an intriguing mystery. Flames general manager Brad Treliving has quipped that the agitating forward could “find trouble at church.”

Pospisil took a big step forward in the shortened 2020-21 season, scoring five goals and 11 points over 14 games. Already playing through a shoulder injury that required surgery, Pospisil’s season was cut short after a nasty knee-on-knee collision resulted in an injury that also required surgery. If Pospisil’s offensive outburst last season is something he can replicate, he could be a really useful piece for the Flames over the next few seasons.

A fourth round selection from the 2019 draft, Adam Ruzicka is a big, lanky, and talented, but he’s been a streaky offensive contributor dating back to his days with the Ontario Hockey League’s Sarnia Sting.

His streakiness has followed him to pro hockey. When he’s hot, he’s excellent — he had four consecutive games of three points for Stockton last season. But when he’s cold, he’s very quiet. His hot streaks earned him a call-up and three NHL games for the Flames last season. If he can smooth out his highs and lows, he may soon be able to stay in the NHL.

The goaltending tandem for the Flames is all-but-set for 2020-21, with incumbent Jacob Markstrom joined by likely backup Daniel Vladar, who’s waiver eligible. But with Markstrom coming off a shaky first season with the Flames and Vladar still an unknown quantity at the NHL level with just five big-league games to his resume, some opportunity exists for Adam Werner.

Two-time WHL goaltender of the year Dustin Wolf is the Flames’ goalie of the future. But he’s 20 and embarking on his first season of pro hockey. If Markstrom gets hurt or Vladar struggles in the backup role, it would likely be Werner rather than Wolf that’s called upon to stabilize things in Calgary.

The Flames’ first round selection in the 2020 draft, Connor Zary played a lot of high-end hockey in the 2020-21 campaign. He played for Canada at the World Juniors, then played a handful of pro games with Stockton and impressive with his scoring prowess, then he headed back to junior where he captained the Kamloops Blazers and was among the WHL’s offensive leaders before his season ended prematurely due to injury.

Zary has a unique combination of size, skill, and smarts, and after his brief AHL stint expectations are high for his first pro season. The Flames have lots of NHL-level forward depth and so they can afford not to rush Zary, and he’ll be battling some veteran AHL players like Byron Froese and Glenn Gawdin for ice time in Stockton. But if Zary can be as impactful in the AHL over long periods as he was during his brief stay last season, they won’t keep him hidden away in the minors for too long.