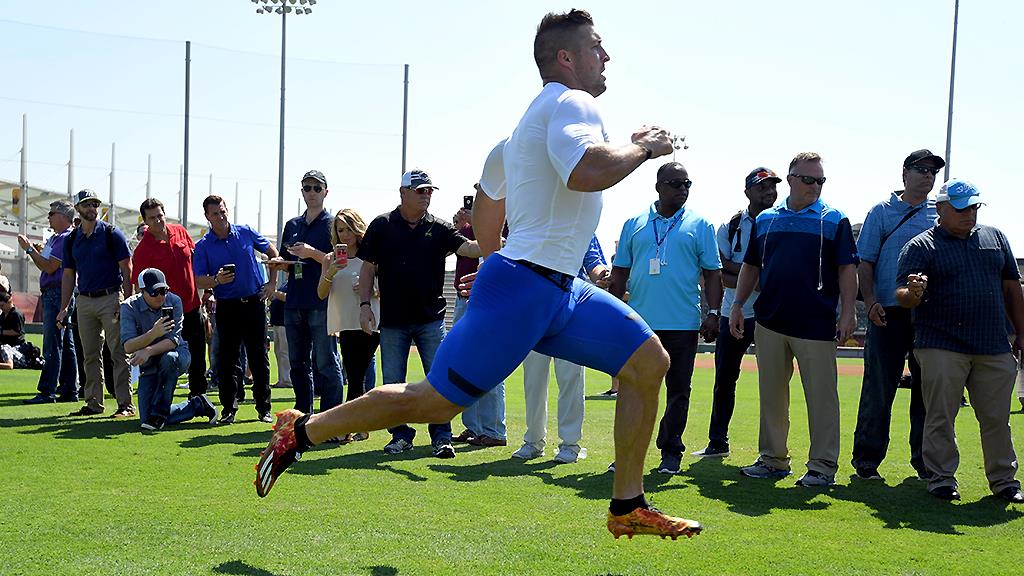 Ever since Tim Tebow’s invitation only workout for baseball scouts last week, there have been rumours swirling about what organization would take a chance on a 29-year-old failed professional football player who hasn’t played organized baseball since his junior year of high school.

Shockingly, over the past few days, Tebow’s list of baseball suitors has grown from an independent Atlantic League team looking for their latest promotion, to a handful of actual major league organizations with the Atlanta Braves and Colorado Rockies leading the way. Word came down on Wednesday that your Toronto Blue Jays were one of the teams whose scouts are taking a hard look at Tebow.

Sources: #BlueJays one of teams exploring Tebow. One of their scouts turned in favorable report.

I am going to be perfectly honest with you, Tim Tebow’s foray into the world of professional baseball is nothing more than a ploy for him to advance the brand of Tim Tebow Inc. and out of all the organizations that are looking at signing him, the Toronto Blue Jays make the least amount of sense.

Luckily for Jays fans, he signed with the New York Mets on Thursday.

We have signed OF @TimTebow to a minor league contract. He will participate in the #Mets Instructional League. pic.twitter.com/I6gmW0b6hY

Let’s start with the obvious; Tim Tebow isn’t a good baseball player now and won’t ever be without years and years of practice. The reviews from his workout range from the very good, complimenting his natural power, to the very bad when one scout mentioned that his swing was so long it might take out the front row. When it came to his fielding ability, the reviews were unanimous; he doesn’t have a very good arm (a real shock to NFL fans!) and he doesn’t have a natural position. So instantly, he has become a candidate to be a designated hitter and his list of suitor’s drops to 50% of MLB.

Side note: Baseball players don’t normally tend to start as designated hitters. It’s a position that you earn by having a valuable bat that a team doesn’t want to remove from the lineup once your defence becomes a liability (i.e. Edwin Encarnacion at third base.)

@975Mornings An anonymous scout said that Tebow’s swing is so long it might “take out the front row.” Good for BP fastballs, but that's it.

In the case of the Toronto Blue Jays, they currently have one of the best DH’s in the game, and if they really wanted to promote a good hitter who can’t play the field, they have a 26-year-old Jesus Montero in waiting for the call in AAA Buffalo. Suddenly, Tim Tebow’s goal of making the major leagues is blocked by the very good professional hitters teams in the American League deploy as designated hitters.

From a non-baseball perspective, Tebow made even less sense for the Toronto Blue Jays since his outspoken Christian faith and prolific college career doesn’t resonate with many sports fans in Canada like it does in the southern United States. And I feel Tim Tebow is aware of this since he has shown no desire to develop his career as a quarterback in the CFL.

How will this all play out? He’ll play some winter league baseball, participate in camp with the Mets, sell some autographed merchandise, gets reassigned to a minor league camp and then inevitably give up on minor league baseball after a few months when he realizes it’s a lot of hard work and the public relations spotlight has faded away.

Then he can join the illustrious names like Garth Brooks and Billy Crystal as celebrities who tried their hand at professional baseball and failed. Because that is all Tim Tebow is at this point, a celebrity who is advancing his brand.

At least Garth and Billy were honest about it.