Quintessential rockers The Who are celebrating their golden anniversary with The Who Hits 50, a giant rock and roll spectacle that invades the Scotiabank Saddledome tonight.

It’s actually been 51 years since The Who released their debut album My Generation, but the band was forced to postpone their previously scheduled Calgary show when singer Roger Daltrey contracted meningitis last year. Daltrey is all healed up and ready to rock alongside veterans Simon Townshend, Zak Starkey, Pino Palladino and guitar hero Pete Townshend. Tonight’s show will feature the same backing musicians that accompanied The Who on their Quadrophenia and More tour in 2012.

After The Who Hits 50 was announced, Pete Townshend teased that the trek would feature “hits, picks, mixes, and misses” from the The Who’s storied career, and as indicated by our setlist preview, the band is making good on that promise.

“Baba O’Riley” and “I Can See For Miles” made the cut, which is a no-brainer as both songs appear on the Rock & Roll Hall of Fame’s “500 Songs That Shaped Rock and Roll” list.

As for deeper tracks, “A Quick One (While He’s Away)” is making its first appearance on a Who setlist since 1970, while “So Sad About Us” will be performed in full for the first time since 1967. Overlooked gems like “Pictures of Lily” and “Join Together” are also getting their due, as both songs haven’t made a tour appearance in over 25 years.

In the early 2000’s, a whole new generation was turned on to the “My Generation” singers after their songs were heavily featured in the CSI television franchise. Fun fact: The Who will open their Calgary show with the theme to CSI (“Who Are You”) and will close with the theme to CSI: Miami (“Won’t Get Fooled Again”). 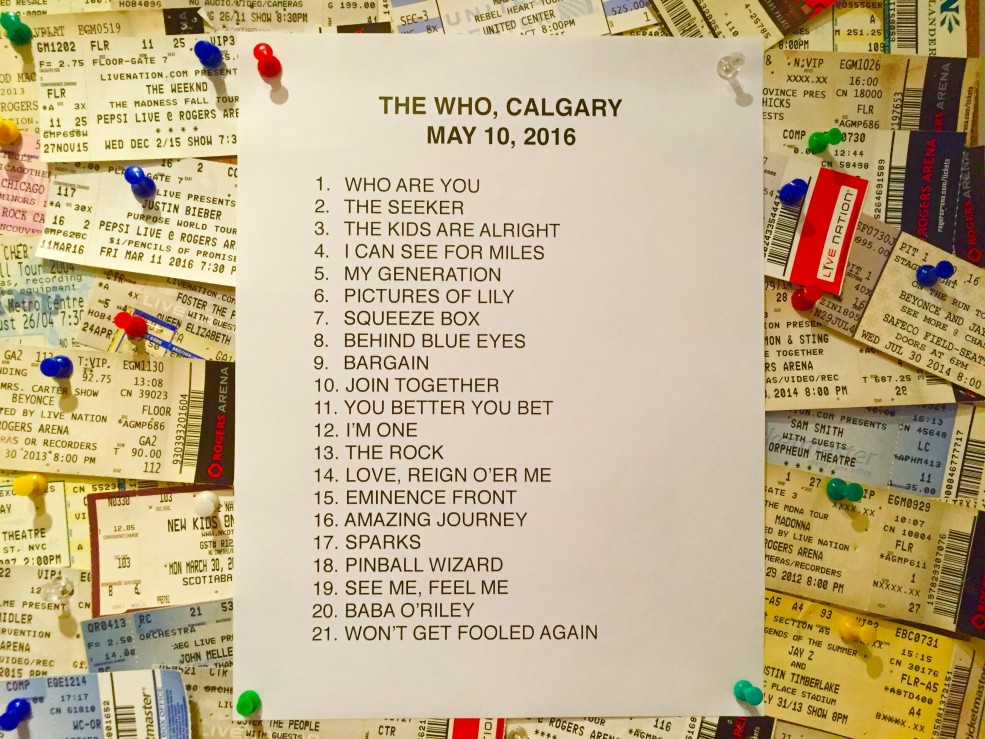 A few tickets for The Who Hits 50 tour are available for purchase here.