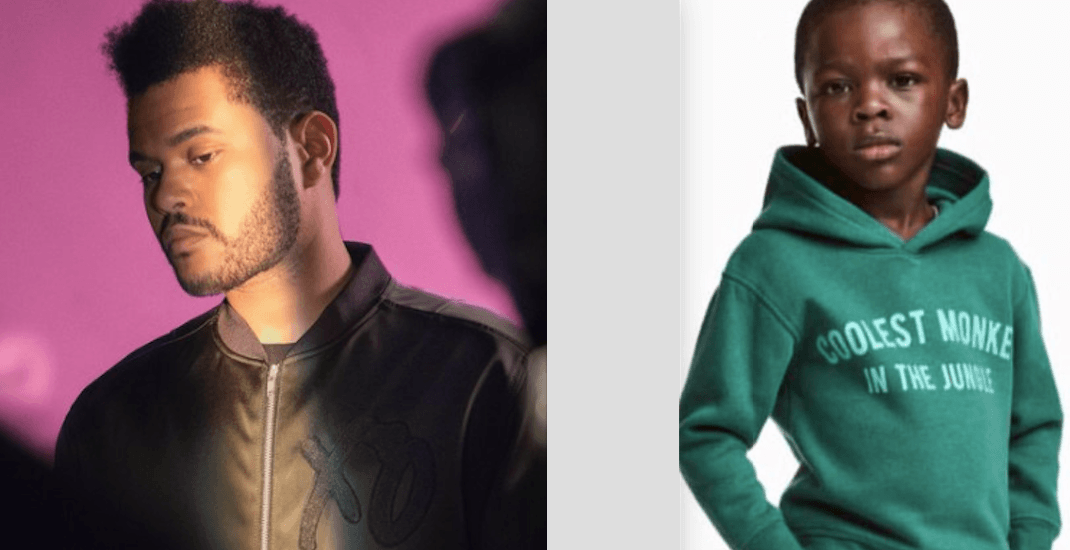 The Weeknd has ended his menswear collaboration with H&M following the company’s questionable decision to use a black child to model a sweatshirt that read “coolest monkey in the jungle” on their UK website.

On Monday, the Toronto-based R&B star said that he would no longer be working with the clothing giant due to the insensitivity and racial undertones construed by the ad.

“Woke up this morning shocked and embarassed by this photo. I’m deeply offended and will not be working with @hm anymore…” The Weeknd said in his tweet.

The picture has been criticized on social media for being racist and tone-deaf because it was modelled by a black child.

That H&M hoodie in and of itself is not racist nor offensive. However putting it on and marketing it with a black child with historical and current context is just not a good look.

Someone at H&M thought it would be cool to have this adorable black kid wear a hoodie that says “coolest monkey in the jungle.” #dumbass https://t.co/gXUAz0nBiQ

It’s beyond racist, discriminatory, tone deaf, ignorant and reprehensible that MULTIPLE PEOPLE at #H&M decided that it was a great idea to call a Black Kid a Monkey, who by the way is wearing a HOODIE! Still wonder why we keep fighting for justice?

H&M: Let’s put a black kid in a “coolest monkey in the jungle” hoodie!

People are totally not getting the point about H&M racist ad. It’s not about how kids get called monkeys. It’s the meaning of the word monkey to black people, it’s been used to insult blacks for years. And choosing to put the hoodie on him is insensitive and racist. @hm

Hip-hop stars Questlove and T.I. also chimed into the conversation.

I’m sure the apologies are a coming. And the ads will be pulled. I’m certain there will Be media fixers and whatnot and maybe a grand gesture like a donation to some charity (donations under these circumstances are the corporate version #SomeOfMyBestFriendsAre move if there ever was one) all this tells me about @HM is that the seats in the boardroom lack something…wanna take a guess?

I think This is what @hm meant to print. RP: @sthuby Don’t Get it FUC*ED UP!!! We account for Trillions in buying power & U WILL RESPECT THAT or we will SHUT YOUR BUSINESSES DOWN!!!! #boycotthandm🚫

H&M has since apologized for the advertisment.

The Weeknd announced his now terminated spring collaberation with H&M back in 2016.