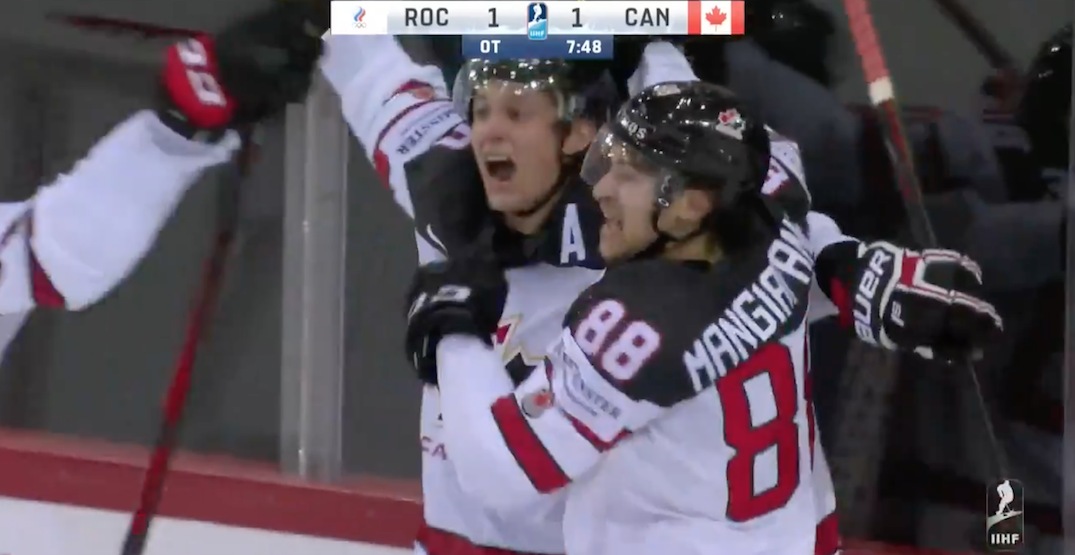 After a dreadfully slow start with an undermanned lineup at the IIHF World Championships in Latvia, Team Canada appears to be hitting their stride at the perfect time.

Canada secured a 2-1 win in overtime against Russia in the quarter-finals today, doing so in spectacular fashion.

Former Vancouver Canucks defenceman Troy Stecher made a between the legs move to get by one Russian, then deked around another before sliding a cross-crease pass to Calgary Flames forward Andrew Mangiapane for the overtime game-winner.

It was a thing of beauty.

“I pulled off a move like that in practice yesterday and [assistant general manager] Shane Doan kind of gave me a hard time about not doing it in a game,” Stecher said about his between-the-legs move. “I think my instincts took over and I was able to find [Mangiapane], and it all just kind of worked out.

“I feel like I have started to play with a lot of confidence in this tournament, confidence I did not necessarily have during the NHL regular season. It has been paying off for me and it certainly paid off in overtime.”

Adam Henrique scored the other goal for Canada, tying the game up five minutes into the third period.

We’re not used to being underdogs in international hockey, but that’s exactly what this Canadian team was entering the quarters. Canada just squeaked into the knockout round with a 3-3-1 record, finishing behind Germany and needing Latvia to lose on the final day of the preliminary round just to stay alive.

Many of Canada’s top players didn’t make the trip to Latvia due to the pandemic. Notable names on the team include the likes of Henrique, Connor Brown, and Darcy Kuemper — not exactly star players. Canada is also dressing three players that won’t be drafted in the NHL until this summer, to give you an idea what the depth pool was like.

Canada will face the USA in the semi-finals on Saturday. Finland and Germany are the other two teams still in the running for gold.