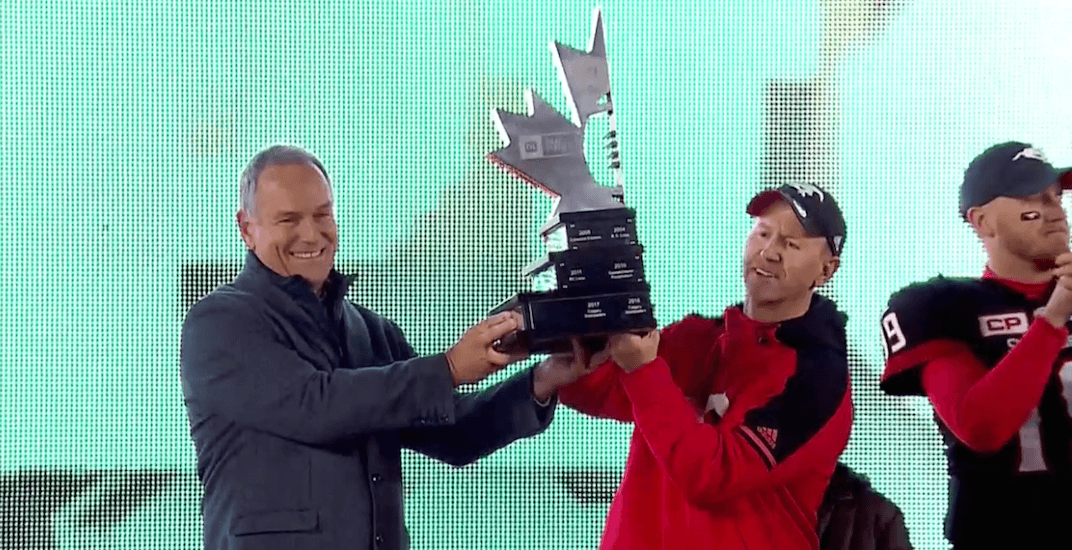 The Stamps are going back to the Grey Cup.

Calgary won the Battle of Alberta in the Western Final on Sunday, defeating Edmonton 32-28. The win sends the Stampeders to their third Grey Cup in the last four years.

It didn’t start off promising for the Stamps, who looked rusty at McMahon Stadium early on.

Calgary found their groove, scoring three touchdowns in the second quarter. They tied the game before a 50-yard run by Roy Finch gave them the lead in the final minute before halftime.

Calgary carried a 13-point lead into the fourth quarter.

Edmonton made a late charge, closing the gap to just seven points late in the game, before Eskimos coach Jason Maas made a bizarre decision.

With just 1:54 remaining and Edmonton facing a third-and-four on Calgary’s 13-yard line, the Eskimos inexplicably decided to kick a field goal.

That closed the gap to four points, meaning Edmonton still needed to score a touchdown. They also gave the ball back to Calgary.

As it turned out, Eskimos QB Mike Reilly never got the football back in his hands. The coaching decision is sure to be heavily criticized in northern Alberta.

Redemption will be on the minds of the Stampeders next Sunday.

Calgary will be heavily favoured in the Grey Cup, just as they were last year when they were upset by the Ottawa Redblacks. In a rematch of the 100th Grey Cup in 2012, it’ll be Calgary against Toronto for the top prize in Canadian football.

Toronto finished with a 9-9 record