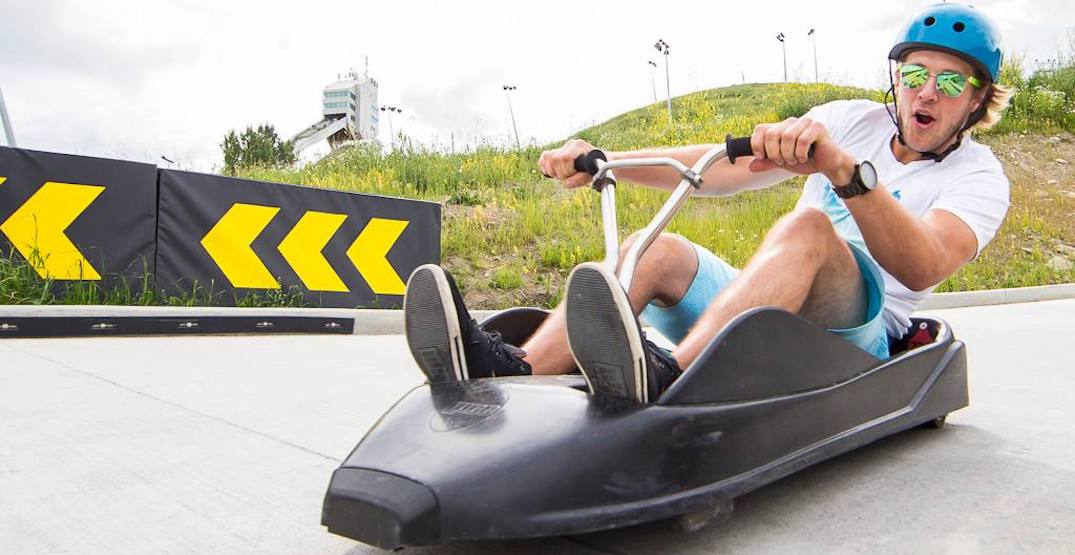 Who said it needed to be winter to luge?

While Calgary is home to the WinSport’s Canada Olympic Park, where residents and visitors alike can try their hand at the luge track from the 1988 Winter Olympics, we’re talking about something a little less expensive, and a little less terrifying.

Skyline Luge, Calgary’s wheeled luge experience, is also located at Canada Olympic Park, but instead of the classic luge/bobsled/skeleton track that you’re used to seeing in the Olympics, you’ll instead be travelling down a specially designed cement track full of twists and turns.

The main difference between Skyline Luge and Olympic luge is the addition of handlebars, so riders will feel a bit more in control than they would be hurtling down an ice track on their backs.

Skyline Luge has been operating in Calgary since 2013, when they opened up the world’s longest Skyline Luge track at 1.8 km.

In the five years since, nearly one million rides have been down the fast-paced track, and they’re planning to celebrate their one-millionth ride with a special prize for whoever crosses that finish line.

“We are so grateful to the locals who have embraced our Luge and supported it from the beginning,” said Skyline Luge Calgary General Manager Tim Gleason in the release.

“As inventors of the Luge, Skyline is delighted that people enjoy the product as much as we do. We are proud to have delivered 45 million rides across five countries and three continents and look forward to celebrating this milestone with our guests in Calgary.”

The millionth rider will win a trip to Skyline’s site in Mont Tremblant, Quebec for an adventure-filled vacation, though they aren’t the only one who will gain from the company’s celebration.

From now until July 20, Skyline Luge Calgary will be offering a discounted pass, with four luge rides going for just $26, and digital photos being charged at $3 each.

Not a bad deal when you consider that one luge ride usually goes for $16.

The luge ride is suitable for people of all ages, as the wheeled luges give the rider the ability to control how slow (or fast) they go down the hill.