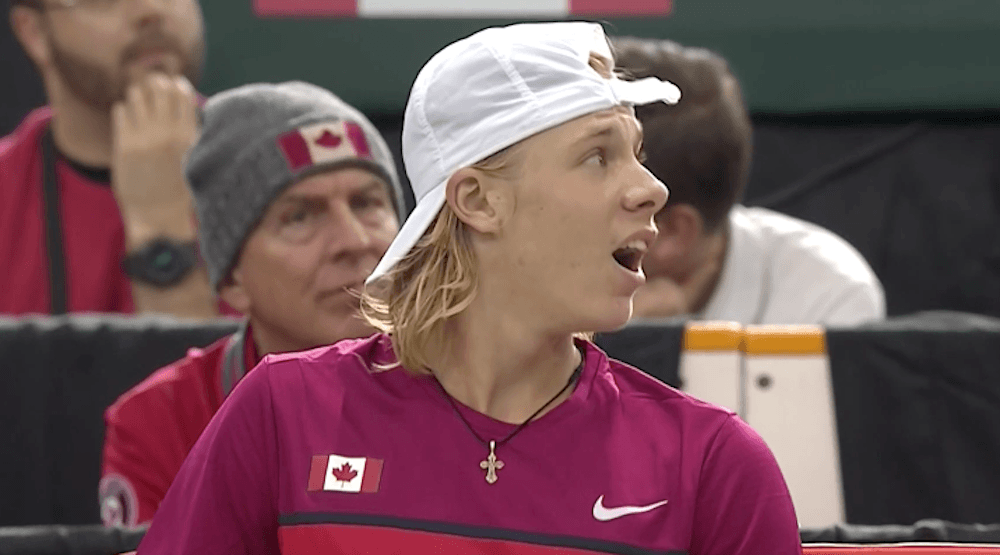 There’s never been a more bizarre way to end a tennis match.

With Canada and Great Britain deadlocked at two matches apiece, their Davis Cup tie would be decided by the final singles match between Denis Shapovalov of Richmond Hill, Ontario and Great Britain’s Kyle Edmund.

Shapovalov, you might remember, is the 17-year-old who won the Wimbledon Boys’ Singles Championship in 2016.

He’s got a bright future, but is ranked 251 in the world and was in tough against Edmund, ranked 53rd.

Tied 1-1 in third set after dropping the first two, Shapovalov’s serve was broken by Edmund. It was a key moment in the match, for which Shapovalov let his frustration get the best of him.

He pegged the umpire in the face:

Full moment of disqualification of Denis Shapovalov in HD pic.twitter.com/GDbC2bYJ7Y

All 7,497 people in attendance in Ottawa fell silent.

It wasn’t on purpose of course. Shapovalov was trying to fire the ball into the air and judging by the look on his face, had zero intention of hitting the chair umpire.

Shapovalov, as you can imagine, was full of remorse and embarrassment post-match.

“I would just like to begin with apologizing to the referee, and to all ITF officials,” Shapovalov said in a statement. “I went back and spoke to the referee after and apologized right to him. Luckily he was okay, but obviously it was unacceptable behaviour from me and to be honest I feel just incredibly ashamed and embarrassed. I just feel awful for letting my team down, letting my country down, for acting in a way that I would never want to act. I can promise that it’s the last time I will do anything like that. I’ve learned from this and am going to try and move past it. I was very lucky the referee was okay, but this is unacceptable for me.”

“It was just a lesson that he will take from this and move forward,” Laurendeau said. “He’s a kid as you see, he wants to face the music, and he’s not going to shy away. He’s got some great talent and it’s just the beginning of his career. He’ll draw a big lesson from this. It’s a tough sport; you can’t compete if you don’t have emotional control and this lesson could serve him for the rest of his career, but there’s a lot of things you can take from this. Hopefully he’s able to move forward stronger from this.”

This is obviously going to take a toll on the young tennis star, but hopefully he will learn from it and move on.

But for blooper reels, it will live on forever.