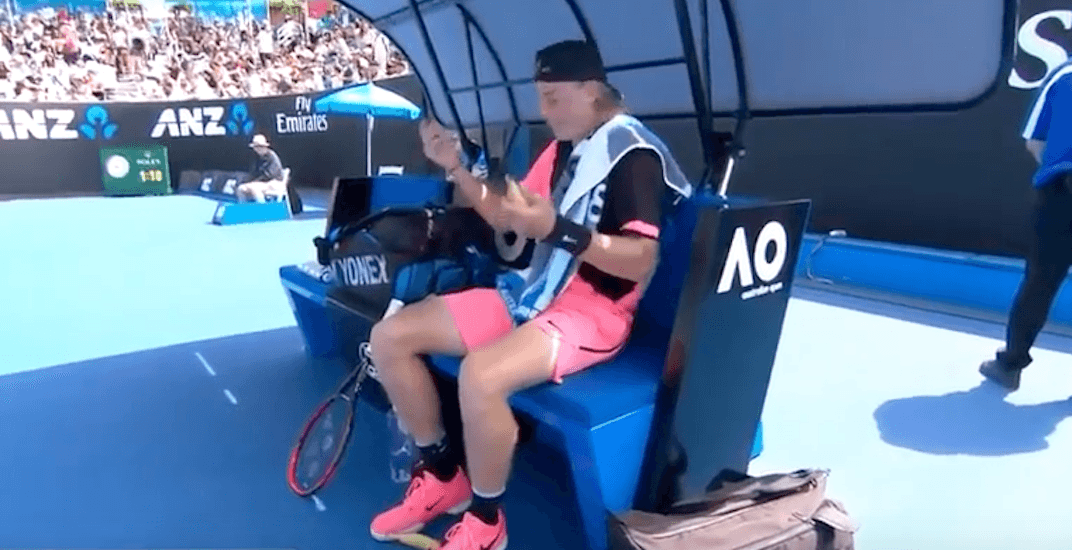 Canada’s Denis Shapovalov pummelled his way into the second round of the Australian Open Monday, defeating Greece’s Stefanos Tsitsipas 6-1, 6-3, 6-5.

And while he grabbed full control of the first-round match from the moment it began, not everything came easily during the nearly two-hour long match. The third set proved to be a challenge, and not only because Tsitsipas changed tactics and nearly forced a tiebreaker.

Midway through the set, Shapovalov was captured by cameras in a fight for his life with a few bananas. Luckily for him and his energy levels, he eventually won the battle to get some potassium in his body, enabling him to close out the win.

“I don’t know, bananas these days… they’re so tough to open,” said Shapovalov after the match.

Shapovalov’s opponents will be much tougher than the 82nd ranked player in the world from here on out. Still, that shouldn’t take away from what Shapovalov did to the 19-year-old up-and-comer from Greece.

From the start, Shapovalov controlled points, hitting shots with variety, moving Tsitsipas around the court, and attacking every time he had a chance.

Broken on his first two service games, Tsitsipas found himself in a 0-5 hole early in the first set. The Canadian hit nine aces in the match while hitting 57 percent of his first serves in. More telling: he hit 33 winners to his opponent’s 11.

In the second and third sets, Tsitsipas changed tactics, serving-and-volleying and attempting to control more points. But really, if not for a slight dip in the Canadian’s game, it wasn’t close.

Now, through to the second round at a Grand Slam tournament for the second time in his young career, the 19-year-old’s matchups will become a lot harder.

If you’ve been following along as the young Canadian’s career has unfolded, you’ll remember he beat Tsonga in the second round at last year’s U.S. Open.

What you may not remember was it was a 6-4, 6-4, 7-6 straight sets victory in which Tsonga put up a solid fight but didn’t have the answers on the biggest points in each set. Tsonga managed just three points in that third set tie breaker.

Still, don’t expect the Frenchman to give away his service games the way Shapovalov’s first round opponent did. You can assume that Tsonga, who’s played five grand slam semi-finals and one final – at the Australian Open in 2008 – will be extra motivated with that loss fresh in his memory.

If Shapovalov wins on Tuesday, he will likely face one of tennis’s most talented players in the third round in Nick Kyrgios. While Kyrgios is known for being immature and inconsistent, he’s come to this tournament playing so well that many are considering him a championship threat.

Kyrgios won one of the bigger Australian Open tune up events one week ago in Brisbane, beating world No. 3 Grigor Dimitrov in the semis.

So all I’m saying is clear your schedules Canada, because the tennis is about to get good.