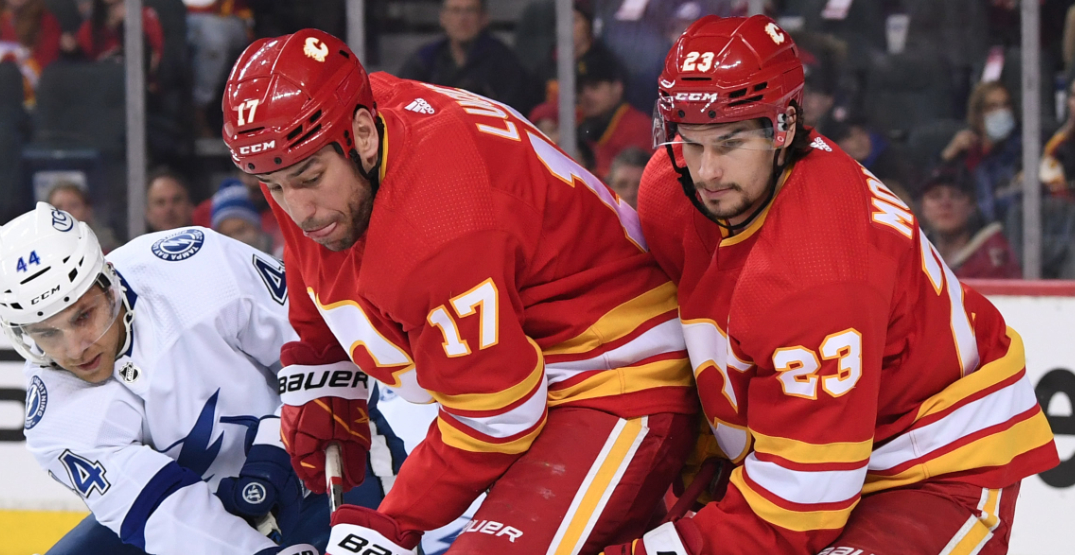 Ryan Carpenter is going to come in.

That means someone else is going to have to shuffle out of the Calgary Flames lineup. Maybe for the first time this season.

“Ryan’s a guy we liked a lot,” Flames general manager Brad Treliving said on deadline day. “I think he fits the style we play. He’s a north-south player, an excellent penalty killer, he plays hard. He’s got some sandpaper in his game and I think he’ll fit in well with us.”

The three most obvious candidates are the three currently skating on the fourth line, where Carpenter is expected to go to work upon arrival to Calgary.

Each of the three — Sean Monahan, Milan Lucic, and Trevor Lewis — have yet to miss a game for the Flames this season but are in danger of some press-box relegation pending Darryl Sutter’s plan for the new guy.

But determining who might be punted to popcorn munching isn’t all that easy to determine.

None of the three have been fruitful offensively.

Monahan, for example, is without a point in his last 14 skates and has just three, by way of a goal and two helpers, over the course of his last 17 games. That’s simply not enough for the seven-time 20-goal scorer who understandably has slipped to the bottom of the depth chart after being plagued by injury issues the past few seasons.

Making matters worse in arguing for Monahan is the fact that he’s averaged 1:12 of ice time per game on the Flames’ second power-play unit — sixth-most among the forward core. He’s got one power-play point to show for it over that 17-game stretch.

Lewis, by comparison, has produced even less than Monahan. He’s got just two assists to show for an average of 12:58 of ice time per game, and his last goal came on February 1 — 22 games ago.

The issue with sitting Lewis, however, is you take away an option on the penalty kill — the NHL’s fourth-best PK. Lewis averages the third-most ice time shorthanded on the squad, skating 2:03 down a man per game. That’s not an insignificant number. Sure, Carpenter will replace some of those should Lewis pop out, but that doesn’t resolve the issue of trying to take some of the heavy lifting away from the likes of Elias Lindholm and Mikael Backlund, who both see more minutes on the kill.

Which leaves the loveable Lucic.

Lucic is the only one of the three to score at even strength since Feb. 16, potting a Rasmus Andersson redirect against the New Jersey Devils on March 16. But that’s all he has to show for, at least on the scoreboard, over the last five weeks — and that includes over a minute of power-play work per game in that span.

He’s above Lewis and below Monahan in terms of possession numbers, and still on the positive side of things. Surprisingly, he’s only second in hits during the same span, with 37 (Lewis actually paces all forwards in that regard). He’s too frequently giving the puck away, though, six-times more prone to turnovers than Lewis, and nearly three times that of Monahan.

The sleeper pick could be one of Calgary’s hottest players of yet.

He was the most recently scratched, after all.

But Dillon Dube has affixed himself among Calgary’s top nine with a fruitful four points (two goals, two assists) in his past four games after just three in his previous 10 outings. He’s shown well alongside a recent audition with Mikael Backlund and Matthew Tkachuk on the Flames’ de facto second line.

Regardless, it’ll make for an interesting watch.

None of the three — Lucic, Monahan, Lewis — have been healthier this season, never mind missing a game due to injury. Each has been given a depth role with limited, sheltered minutes. Production, despite some of the salaries garnered, isn’t necessarily the primary objective of the group.

But it’s fair to say they’ve struggled to do so — even if their individual efforts have outpaced Carpenter throughout the entire body of the season.

And while each adds a dimension outside of the five-on-five game, for Carpenter to go in, one has to come out.