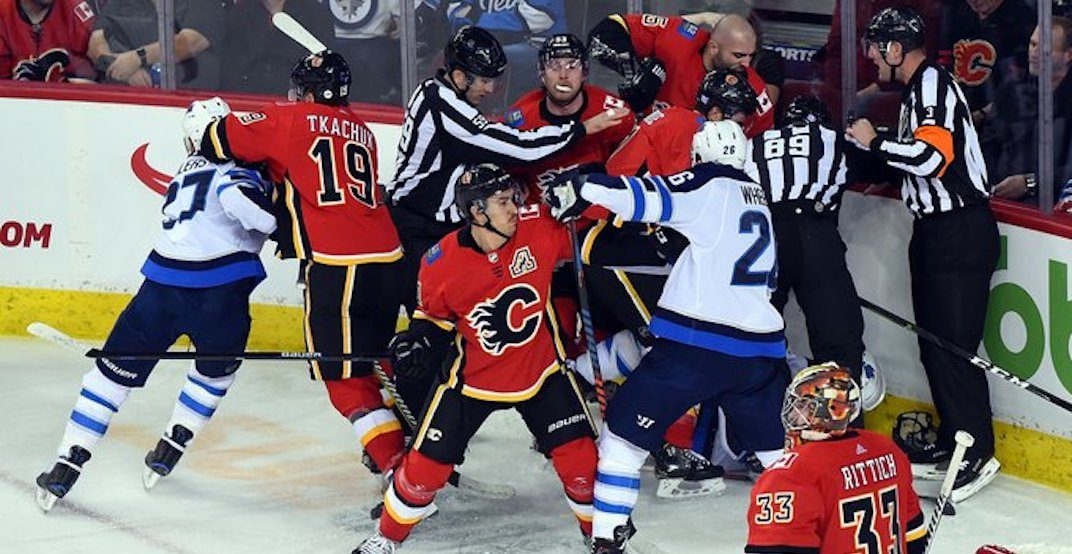 In just a matter of hours the strangest, weirdest, most fascinating NHL playoffs in league history will kick off in Edmonton and Toronto.

Of all the qualification series that are slated to begin this weekend, few are as anticipated north of the border as the Calgary Flames taking on the Winnipeg Jets.

The best-of-five matchup begins Saturday at 8:30 pm MT and is the lone series to feature an all-Canadian tilt, though it’s between two clubs who have struggled to form a rivalry over the last decade.

Calgary needs to only look north to Edmonton or westward to Vancouver to glance at their two biggest rivals, but for whatever reason that has never come to pass with the Jets.

Although there will be no fans in the building to watch, there is a chance that this clash of skilled prairie foes could provide the spark for a new rivalry moving forward.

A Calgary-Winnipeg rivalry is something that fans of both clubs imagined when the Jets moved back to Manitoba in 2011.

That hostility hasn’t necessarily emerged since that relocation from Atlanta though, with neither team facing the other in playoffs to this point.

The lone big stage matchup featuring the Flames and Jets came this past fall at Mosaic Stadium in Regina at the 2019 Heritage Classic.

Even though this qualification round will be shorter than your standard Stanley Cup playoff series, there is still potential for both western Canadian clubs to form a regional rivalry.

Take the Vancouver Canucks and Chicago Blackhawks, two teams that rarely showed any animosity during the regular season.

A series of wild playoff meetings in the early 2010s re-wrote that script however, setting the stage for dozens of high-intensity matchups throughout the decade.

While close proximity and passionate fanbases are important in kick starting a great hockey rivalry, the quality of the games themselves matters just as much.

Ahead of this weekend’s series, the Flames will have to handle Winnipeg’s dynamic offensive core led by Mark Schiefele, Kyle Connor, and Blake Wheeler.

Connor seemed poised to have reached the 40-goal plateau before the regular season was put on hold, while Scheifele and Wheeler combined for 138 points on Winnipeg’s top line.

Combined with the dynamic potential of Patrik Laine and Nikolaj Ehlers when they are at the top of their respective games and the Jets form one of the best two-line punches in the West.

Calgary’s forward group might not equal the star-power that Winnipeg offers, however the duo of Johnny Gaudreau and Sean Monahan have the ability to take games over.

Previous playoff performances by Gaudreau and Monahan have cast some doubt whether either can step up on the NHL’s biggest stage, though that could change with a big showing offensively versus Winnipeg.

Fanbases for both the Flames and Jets have been waiting patiently for their teams to make a run to the Stanley Cup Final and to win the ‘COVID Cup’ it’s going to take a monumental effort this summer.

Five rounds of hockey will be required for both teams to take home this year’s Stanley Cup, something that fans have been anticipating for decades.

The Flames have not made it past the second round of playoffs since their run to the 2004 Stanley Cup Final, which also marks their lone appearance in the conference finals since the franchise’s lone championship in 1989.

Things are even more desperate on the Jets side though, as they have yet to make an appearance in the Final dating back to the franchise’s first season in the NHL in 1979.

Winnipeg most recently made it to the Western Conference Final in 2018 before losing in five games to the expansion Vegas Golden Knights.

With just one combined Stanley Cup Finals appearance dating back to the late 1980s, there is a hunger for both clubs to make a run this summer with their paths beginning in the same spot.

Maybe the biggest driver of a future rivalry between the Flames and Jets could come from a pair of players who will likely play a big part in deciding who will advance.

Calgary’s Matthew Tkachuk and Winnipeg’s Connor Hellebuyck have been their teams’ best players in 2019-20 and are built to be playoff performers.

Tkachuk is in the middle of another highly productive season in Calgary, leading the team with 23 goals and 61 points in 69 games at the break.

When it comes to his net-front and agitating play however, Tkachuk has become one of the NHL’s premier pests and will be relied upon to make Hellebuyck’s life a living hell in the Jets crease.

As for Hellebuyck, he will present the biggest challenge to Calgary’s game plan following his Vezina-calibre regular season which saw him lead the league with six shutouts and compile a .922 save percentage with a mediocre blue line in front of him.

The battle between the future American Olympic teammates could be the ultimate tale of the tape when it comes to this upcoming series and how the Flames-Jets matchup is perceived in coming years.

Do Tkachuk’s antics spark another line brawl? Does Hellebuyck become the goalie that steals a playoff series for the Jets? What effect with the lack of a home crowd have on either team?

There’s still plenty that needs to happen before Calgary-Winnipeg even comes close to Calgary-Edmonton or Calgary-Vancouver, but a hard-fought playoff series surely would be a good first step.